The number of
migrants trying to reach Europe by sea is already picking up, as it does every
year. Putting their lives in the hands of unscrupulous smugglers, scores of
them will drown. The ones who reach European shores will face years of
uncertainty in asylum centers and hostility from nativists and nationalists who
feel threatened by them. Librettist Jonathan West, informed by the writings of
Ilja Leonard Pfeijffer, bravely tackles the most salient aspects of the
European migrant crisis. The libretto is economical and purposeful in the
beginning, but loses momentum halfway through. Tsoupaki’s atmospheric
score contains some involving scenes, but is ultimately too circuitous to be
fully convincing.

Totally up to the mark, on the other hand, are the cast and production.
Director Floris Visser keeps things clear and to the point. Costumes and set
are unfussy. On a rotating stage, sharp rocks denote a Greek island and a large
door is the gateway to Europe. The drowning chorus wears life jackets sent over
from Lesbos by an NGO that works with migrants. Soprano Rosemary Joshua sang
Europa, an old woman living in Brussels. She is the mouthpiece of the current
anti-immigrant sentiment shaping the European political landscape. With
meticulous singing and crisp enunciation, Joshua created a focused portrait of
a woman clinging to the past and terrified of the present. Her hankering for
Old Europe is poetically expressed through the myth of Europa, the Phoenician
princess who dreamed of two continents, Asia and an unnamed continent, fighting
over her. The next morning she was carried away across the sea to Crete by Zeus
disguised as a beautiful white bull. Europa gave Zeus sons and her name to her
new home. 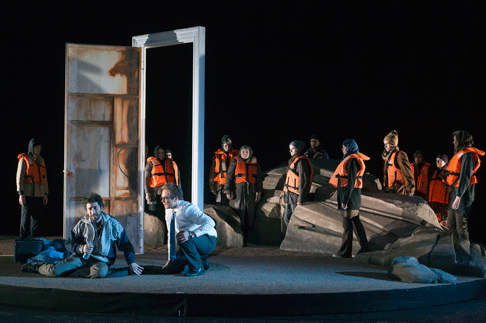 A scene from Fortress Europe

Political tensions over the influx of migrants are explored in conversations
between Europa and her son Frans, a politician. Tenor Erik Slik sank his teeth
wholeheartedly into this role in an emotionally charged and vocally assertive
performance. Frans, a progressively sympathetic figure, is torn between his
political mandate to guard European borders and his empathy for the refugees.
While Europa recalls her youthful romance with phrases curling into melismas,
Frans reminds her that even she once washed up in Europe from foreign shores.
Mother and son fight over granting asylum to Amar, a Syrian who is the sole
survivor of a catastrophic crossing. Europa refuses him entry, destroying him.
Bass-baritone Yavuz Arman ??leker sang Amar with much vocal beauty and dignity.
His slight Turkish accent added to the complexity of the topic under scrutiny.
Amar’s re-enactment of the drowning with the chorus of migrants was the
emotional peak of the opera. The excellent Netherlands Student Chamber Choir
supplied young, vibrato-light voices for the spectral chorus. Singing a
haunting Arab folk song, they fell silent one by one, shedding their life
jackets onto a forlorn heap.

Conductor Bas Wiegers led the seven-strong Asko|Schönberg ensemble with
confidence. The oboe and cor anglais had the lion’s share of the solos,
in languid Eastern scales and plaintive keening. Tsoupaki is free with musical
idioms, braiding passages for string quartet with Greek Orthodox hymns and Arab
melodies. A harp evokes nostalgia and percussion crescendos mark dramatic
events, while sound effects recreate wind and waves. Lucid orchestral colors
suggest an exposed beach or the glade where Europa gives herself to Zeus. The
problem is that Tsoupaki’s vocal writing is rhythmically repetitive and
her melodies tenuous. Ariosos for the soloists begin promisingly, but end up
where they started without evolving. The percussion flare-ups lose their impact
through overuse. She passes over the opportunity to write a lively ensemble
scene when journalists cross-examine Frans about his immigration policy. The
entire press conference is spoken, and very well too, but it is too long.

Wordiness, successfully avoided during the trenchant phone conversations
between mother and son, mars their final confrontation. They become megaphones
for pro- and anti-immigration arguments and the music is not inventive enough
to sustain interest. Amar’s tragic end is a horrific climax, but it
arrives to late. Fortress Europe is the first installment of a trilogy
about sociopolitical bushfires called Sign of the Times, produced by a
company called Opera Trionfo. Dutch National Opera is collaborating on the
project and this world premiere was part of their annual Opera Forward
Festival. Musically, this ninety-minute work never reaches the boiling point
required by its subject matter, but its best moments and the high quality of
the performance makes one curious about its sequels.