The performing version of the work was conceived and directed by Marta Domingo based on the integral edition of the opera edited by Michael Kaye and Jean-Christophe Keck. There are different versions of this opera because Offenbach died several months before its premiere and some work had to be completed by others.
Giovanni Agostinucci’s heavily detailed set and costumes placed the stories in their original locales and gave the audience a fascinating stage picture to contemplate. Alan Burrett’s lighting design pointed out pictures on the walls, one of which looked like Mozart. An operagoer might have to see this production more than once to get all the meaning out of it. 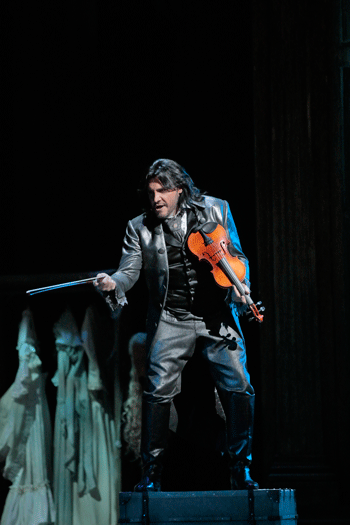 Nicolas Teste as Dr. Miracle
Marta Domingo’s direction gave each character both motivations and expressive activities and she showed that her artistic ability has grown considerably over the last decade. Having sung the title role all over the world, Placido Domingo now leads this opera with a knowledge few conductors can approximate. His tempi were inviting and despite dealing with a singer in the orchestra pit as well as a full cat onstage, the result was a unified whole.
Vittorio GrigÚlo sang the title role of Hoffmann with a great deal of panache, creating different aspects of the character in each scene. In the prologue he gives an amusing imitation of the fictional Kleinzach. In Act I he dons rose colored glasses that make him think Olympia is a young girl instead of a roughly assembled automaton as he sings the romance “Ah! vivre deux!” (“Ah! To live together!”) with inviting lyrical tones. With each new love his desire seemed more intense, and it was more difficult for him to deal with rejection, so by the Epilogue, he has lost his grip on reality. Only then did his muse remind him that poetry is empowered by tears, not contentment. 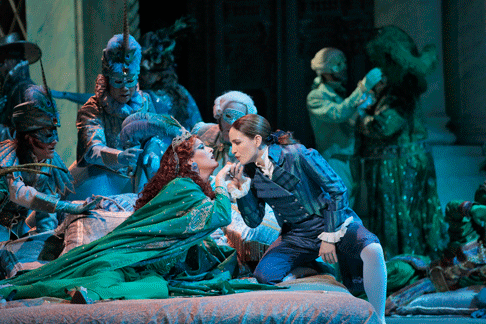 Kate Aldrich as Giulietta and Kate Lindsey as Nicklausse
Offenbach expected all Hoffmann’s love interests, Olympia, Giulietta, Antonia, and Stella, all to be sung by one soprano. Diana Damrau intended to do that, but for health reasons, she eventually relinquished Olympia, the doll, to So Young Park and Giulietta, the Venetian courtesan, to Kate Aldrich. Park was an incredibly energetic magic doll who sang about “Les oiseaux dans la charmille” (“The Birds in the Arbor”) with sweet, stratospheric notes. Aldrich sang the courtesan with a creamy sound but her acting was anything but subtle. Damrau’s Antonia was both technically exquisite and visually heartrending. Even her dying breath was a perfect trill. Stella does not have much to sing, but her demeanor told us that she would never again embrace Hoffmann. I hope someday Damrau will return to Los Angeles and sing all four heroines. When her health is good, she is most certainly capable of showing Angelinos various facets of characterization with these roles. 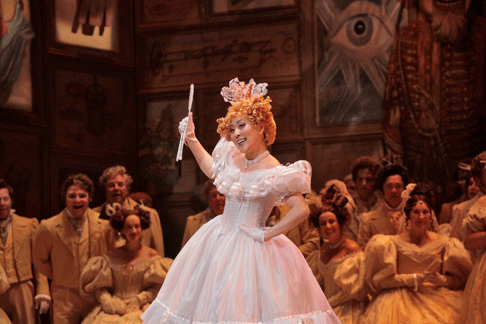 So Young Park as Olympia
French bass-baritone Nicholas TestÈ was to sing all four villains, but became ill the last minute. Thus, an American counterpart, Wayne Tigges, flew in to sing the roles from the orchestra pit while TestÈ acted them onstage. Most amazing was Tigges’s ability to blend into the ensembles when he could not see the other singers. He is most certainly an incredibly able artist.
Kate Lindsey has sung The Muse/Nicklausse all over the world but last night she outdid herself. Not only was her character the voice of reason, she did an imitation of Olympia that had the audience laughing out loud. Lindsey is a subtle artist but there is deep thought behind her characterizations. French buffo tenor Christophe Mortagne also brought out peals of laughter when Frantz, one of his four servants, attempts serious dance. As tavern owner Luther, Korean baritone Kihun Yoon sang with robust tones that easily filled the hall. Rodell Rosel was a self-important Spalanzani who looked much like one of Offenbach’s contemporaries, Richard Wagner. 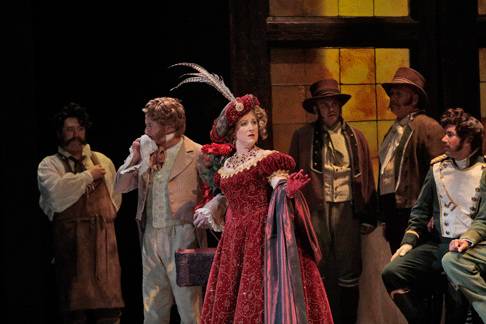 Diana Damrau as Stella (with, at rear left, Kihun Yoon as Luther and Christophe Mortagne as Andres)
If there was a slight weak link, it was the chorus, which seemed to be slightly off the beat when they entered. Hopefully that, and the other problems mentioned here will be fixed by the second performance.
Maria Nockin