When I saw Jaho at the Barbican in November 2015, in Opera Rara’s
semi-staged performance of Leoncavallo’s


I was wowed by the ‘incredible commitment and vocal allure’ that the
Albanian soprano displayed as the charismatic chanteuse from the
backstreets. Here, similarly, she lived and breathed the role of the
culturally and sexually exploited naÔf. Her voice may be quite light for a
part that demands great stamina and strength, but the power of her stage
presence and vocal impact was simply breath-taking. Soft, silky, sensuous,
her soprano throbbed with love. The gentleness of her pianissimo
captured the tragic naivety of Cio-Cio-San’s misperception of reality. Jaho
has a command of phrasing that imbues every melodic line with dramatic
meaning. The Act 1 love duet for Cio-Cio-San and Pinkerton soared with a
passion so fierce that it seemed almost shocking, coming from one so slight
and mild. ‘Un bel dÏ’ was unbearably sweet, Jaho’s voice a tender wisp, as
faint as the puff of smoke she longs to see on the horizon. In Act 1
Butterfly charmed Pinkerton and all; in the second she was resolute through
heartbreak; and in the final Act she sank into terrible desolation with
dignity. 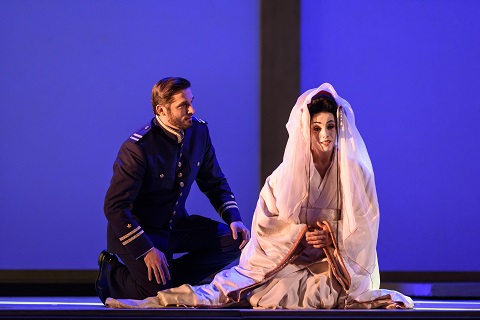 Leiser and Caurier focus less on Cio-Cio-San’s cruel exploitation and
abandonment and more on her selfless love; this truly is a fragile
Butterfly, not a playful or feisty one, and physically Jaho captures all of
her grace and delicacy of her airborne namesake, fluttering and hovering
with feathery lightness. The floating sleeves of her silk furisode
curve and glide; her long black tresses, or taregami, drape sensuously
across her form.

Jaho wholly embodied the delicate sensibility that flinches from danger
even as it embraces it. The newly married Butterfly shrinks from Pinkerton:
‘They say that in your country, if a butterfly is caught by man, he’ll
pierce its heart with a needle and then leave it to perish!’ But, at the
close, her frail wings broken, it is Cio-Cio-San’s own ornamental kaiken that delivers the fatal impalement. When, illumined by pale
moonlight, the sakura petals tumbled from the outstretched
branches of the lone tree, the tragic pathos was almost overwhelming. 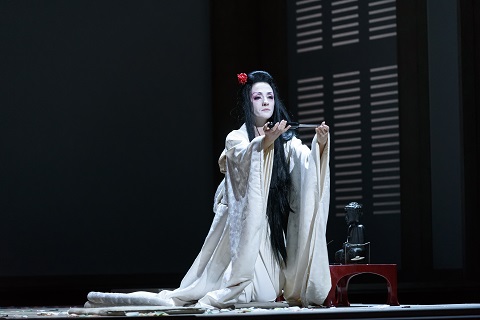 This was the third time that I have seen this production (

) and I found that my seat in the Amphitheatre offered new visual
experiences. The more distant perspective made Christian Fenouillat’s
faraway vistas, visible through and beyond the sliding shoji
screens, acquire an air of whimsical romance, while the blue-pink mist, or sh?y?, which drifts through the ornamental garden infused
Butterfly’s entrance with fairy-tale romance. Similarly, the criss-crossing
shards of coloured light at the close of Act 1 created an even more
penetrating sense of restlessness and disorientation, while, the jarring
complementary colours of the lighting scheme seemed to suggest both a
dreamy otherworldliness and a disturbing unease. 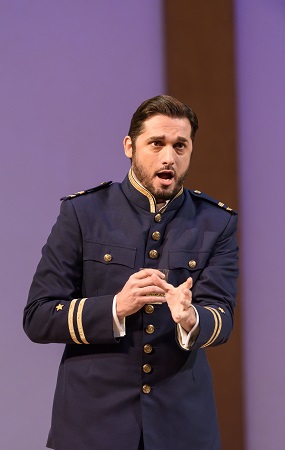 Marcelo Puente looked the part as Lieutenant B.F. Pinkerton, though he
lacked the leering arrogance more common among interpreters – indeed, the
‘boos for the baddie’ at the curtain call seemed even more inappropriate
than usual. Despite some initial graininess in Act 1 and a little strain at
the top, by the end-of-act duet Puente had settled into what was a strong
performance, if a little stiff dramatically.

Making her ROH debut American mezzo-soprano Elizabeth DeShong exhibited a
wonderfully glossy lower register as a fierce, loyal Suzuki, animated of
manner and voice; Carlo Bosi’s self-important, guileful Goro suffered the
sharp end of her tongue. I’d like to see much more of DeShong at the ROH. 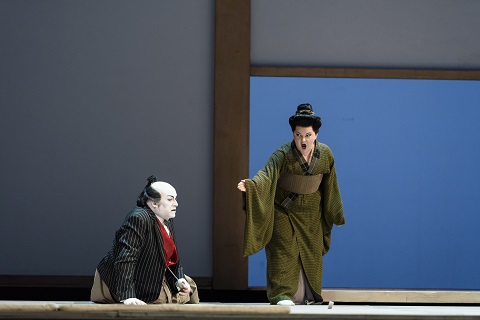 Returning, like Bosi, to reprise their 2015 roles, Jeremy White as the
Bonze and Yuriy Yurchuk as Yamadori contributed to the consistent high
musical and dramatic standards. White harangued stentoriously; Yurchuk made
Yamadori a figure of noble pride. Scott Hendricks was a fairly light-weight
Sharpless but interacted well with Jaho. Jette Parker Young Artist Emily
Edmonds sang Kate Pinkerton with accomplishment. 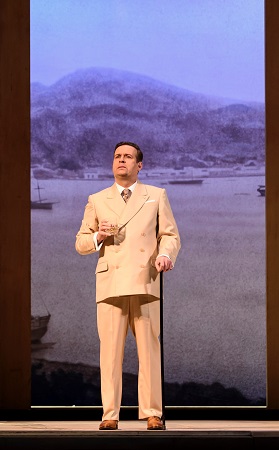 Expertly propelling the drama along with surefooted ease and naturalness,
Sir Antonio Pappano made yet another remarkably vigorous contribution in
the pit, pushing the surging climaxes to their peaks and allowing the
tender moments to speak for themselves.

This is a stunning Butterfly. Grab a ticket if you can, or catch
it in cinemas when it is broadcast live on Thursday 30th March: