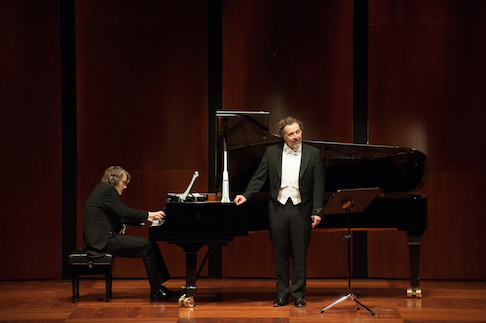 Gerhaher and Huber © Michael Gregonowits
Perhaps it was the giant setting of the Festspielhaus, but intimacy lacked in the experience. Yet Gerhaher made the best of it, alternating his somber mist with frequent bursts of fiery energy. He definitely knows how to shine a light on Schubert’s masterpiece.
Tobias Haslinger’s Romantic poetry came alive through Gerhaher’s nuanced phrasing. His voice captures the listener’s ear and sustains a tension from his convincing sorrow that seems to be emanating from a tortured soul. He charged all of Schubert’s songs with endless sadness, while his weariness also brought out Schubert’s bitter perspective on life’s unrequited love.
In “Wasserflute” (Flood) he mellowed out a bit creating a more contemplative ambience. This calmer softness allowed for a bit of levity. Later, with bulging eyes, he built up to the last song to a ferocious climax in a fortissimo in which he appeared to drain the last of his stamina.
Gerold Huber balanced Gerhaher with invigorating piano play. He created an upbeat contrast to Gerhaher’s heavy-handed presence. In the final song “Der Leiermann” (The Hurdy-Gurdy Man), Huber’s spectacular play complemented the baritone’s great vitality. He offered the perfect accompaniment.
Towards the end, it was impossible not to feel entranced by Schubert’s passion and haunting melancholy. Clearly enamored by tonight’s resonating depth, the elderly couple next to me tenderly carressed each other’s hands throughout the evening. 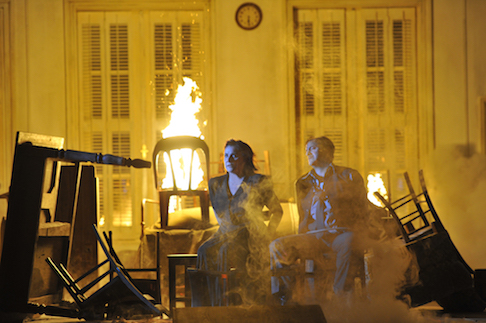 Bartoli in Norma © Hans Joerg Michel
In 2013 at her Salzburg Whitsun Festival, Cecilia Bartoli starred in this production of Norma that then travelled to Zurich, Edinburgh, and Paris. Baden-Baden was its last stop, and the production was at the end of its momentum.
A lyrical tragedy in two acts with a libretto by Felice Romano, Vincenzo Bellini’s bel canto opera tells the story of Norma fighting with the Druid resistance in pre-France fighting against the Roman invasion. Along the way she deals with a love triangle, in which she eventually commits suicide with the Roman Pollione, who had fallen in love with the priestess Adalgisa.
However, in their production, for no reason, Patrice Caurier and Moshe Leiser inexplicably transplaced the story to more recent times. They set Norma (during the WWII…I think) in a 20th Century classroom set, which did bring an intimate atmosphere with lots of dramatic tension. Norma and Pollione’s burning deaths made for a sensational climax.
It was the first time I heard Madama Bartoli live, so I was surprised to be more impressed by her co-star Rebeca Olvera. Bellini’s premature high point, the famous “Casta diva” did not reach the emotional heights I was hoping for. Still, hearing Bartoli’s coloratura with all her bends and turns, put a smile on my face, and her dramatic resonance certainly filled up the otherwise uneventful staging.
Although I expected Ms Bartoli to dazzle, it was soprano Rebeca Olvera who stole my heart as Adalgisa. I was crushed by the Mexican’s performance; both in her rich contrast to Bartoli’s lighter touch; as well as in her desperation and anguish during her high-strung passages. Norman Reinhardt as Pollione seemed a bit lost, but delivered swell vocals. In addition, the Coro della Radiotelevisione svizzera filled up the stage with terrific surges of energy.
Gianluca Capuano with I Barocchisti replaced Diego Fasolis, Bartoli’s usual conductor. Even with the extraordinary acoustics of the Festspielhaus, the orchestra sounded muted. Perhaps the conductor intended not to overshadow the lithe, but demure mezzo voice of Ms. Bartoli. Though what strength her voice missed for Norma, Ms. Bartoli made up in her alluring presence. With her ravishing, brunette turbo hair spiraling from her head, she’s a powerhouse actress that draws the spotlight to her while on stage.
With Norma not living up to the great expectations I usually have satisfied in Baden-Baden, it was the next day with Frau Mutter, who truly stunned me with her focused and dizzyingly romantic Mendelssohn’s Violin Concerto, followed by Ticciati’s engaging performance of Dvorak’s New World Symphony. Her perfect play swooning in its romance proved a sensational ending to this extravagant weekend. 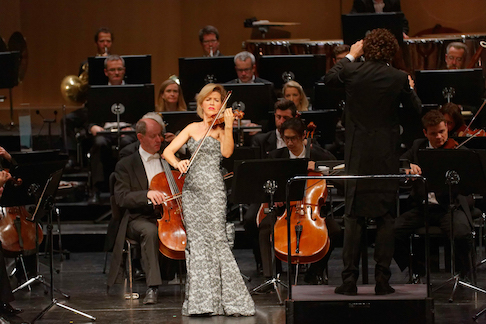