A superlative cast for Lucia di Lammermoor set the house on fire. I was spellbound by Lucia’s madness like never before!
Based on Walter Scott’s novel set in the Lowlands of Scotland in 16th Century, Donizetti’s Lucia di Lammermoor accounts the conflict between the Ravenwood and Ashton clans. For financial reasons, Enrico Ashton forces Lucia to marry the rich Arturo. However, Lucia loves her brother’s arch nemesis Edgardo Ravenwood.
Edgardo, whose family fortune the Ashtons stole, loves Lucia in return. But fate leads to tragedy: on her wedding night, Lucia kills her husband Arturo. This leads up to the mother of all madness scenes. Of course, Lucia dies and Edgardo stabs himself with the dagger to join her in heaven.
Before I tell just how mind-blowing this Lucia was, I should let you know about the opera trauma the last Lammermoor caused me. Last June, over in Cologne, director Eva-Maria Hˆckmayr thought it was a good idea to rearrange Walter Scott’s Scottish locale for a Nazi Germany setting at the end of the WWII. An incestuous relationship between Lucia and her brother Enrico Ashton added a sick and twisted dimension to this dark version of the Von Trapp family in full Nazi gear with, bizarrely, a Minotaur thrown in the mix.
I can hear you thinking, what the…? Hold on, it gets even better.
Edgardo is a Jew returning after the war to his family home in Germany: a set inspired by Mies van der Rohe’s villa Tageshund commissioned by Jewish industrialists. The Gestapo seized the building for operational use. Really, if you hadn’t read those programme notes, you would not have recognised the story. Long live Regietheater!
Half a year later at the Israeli Opera, Emilio Sagi’s Lucia di Lammermoor rekindled my love for Donizetti’s masterpiece, as I ended up mesmerised by MarÌa JosÈ Moreno’s Lucia. Her impressively delirious madness scene had me in a frenzy. With modesty and tender fragility, the Spanish coloratura proved explosive on stage. If you check her out in operabase you find she quite the specialist in this role. No doubt: she nails the character.
As Ms. Moreno sang “Il dolce suono mi colpÏ di sua voce”, she seemed the ideal Lucia –her vocal nuances as equally persuasive as her acting. Ms Moreno reached those insanely high notes with startling purity and moved from joy to horror in a convincing delirium. In one of those rare opera experiences, I leaned-in. My body gravitated forward as Moreno’s magnetic performance drew me in and kept me on the edge of my seat. Bafflingly beautiful.
In an historic castle setting with bedroom and great hall, Emilio Sagi’s staging complemented the singing with a simplistic elegance in red, black, and metallic hues. The luxurious textures of the costumes flowed to the music. The spacious staging allowed the singers to demand the spotlight. The IO brought Sagi’s 1999 production Lucia over from Oviedo’s Opera, and this is its second revival. It is very effective. 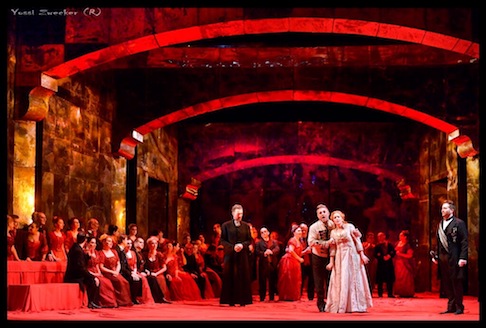 A sharply dressed up Israeli Opera Chorus by Imme Moller served as an additional backbone to the astounding soloists. The IOC, coached by Ethan Schmeisser, brought a sense of grandeur as the singers fuelled the spectacle with a thrilling energy.
Ms Moreno did not outshine Alexey Dolgov’s Edgardo. The Russian from the Bolshoy was her match. Their romantic chemistry filled the drama with tender love. In one of the most difficult tasks in opera, the follow up to Lucia’s madness aria, Dolgov kept the dramatic momentum moving, touching me deeply with Edgardo’s final aria “Tombe degli avi miei”. He earned that explosive applause. 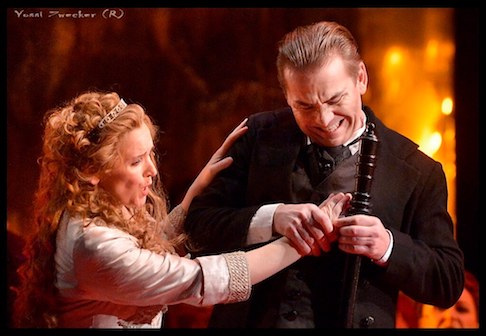 This would have been the perfect introduction to an opera for any newcomer with its persuasively emotive vocals. The Israeli Opera clearly has a nose for casting. Each role role was performed admirably.
Mario Cassi proved a sonorous clashing combatant to Dolgov’s Edgardo during their conflict scene in the opening of the Second Act. Anat Czarny’s Alicia, Lucia’s companion, contrasted Moreno’s virtuous innocence with a darkly edged, wizened tone. As Arturo, Yosef Aridan’s voice fittingly dropped to the background during his interfering moments between Moreno and Dolgov’s fiery chemistry.
Daniele Callegari led the Israel Symphony Orchestra Rishon LeZion and served up Donizetti’s score with lush detail as the orchestra played with great intensity. Although no glass harmonium added to the estrangement of Lucia’s mad scene, Margalit Gafni on her flute did an excellently creepy job at enriching Ms. Moreno’s madness. During the haunting craziness, Mr. Callegari evoked an eeriness just as the expressionistic chills from a Fritz Lang film. By sheer coincidence several evenings earlier, I attended a screening of Metropolis with a new score performed live. In retrospect, it might have been a divination of this sublime afternoon.
As Dolgov’s Edgardo sang “The voice that penetrated my heart,” I felt indeed how Ms. Moreno’s incisive Lucia cut me deep. With such a voice Ms. Moreno could get away with diva attitude, but her thespian camaraderie became clear as she made sure all the performers joined in for the seemingly endless standing ovation. What a treasure she is!
David Pinedo

All other photos by Yossi Zwecker