Stage Director Crystal Manich’s most amusing, well thought out production featured elegant tall building facades from Kentucky Opera that were easily turned around to produce different settings. Designer Kathleen Trott dressed Don Magnifico and his “ugly” daughters in clashing bright colors and textures. The sisters had huge feathers protruding from their coiffures. Don Ramiro and his entourage wore black and white, while the oppressed Angelina wore neutrals. The external settings were serene but the interiors, like their residents, had a great deal of agitation inside them.
Manich directed a group of principals, some of whom were familiar with their roles and had performed them many times. Others, who came from the Arizona Opera Marion Roose Pullin Studio, were singing them for the first time. Two of these young artists showed a great deal of promise. As Dandini, the valet, Joseph Lattanzi sang some incredible coloratura. So did Katrina Galka as Clorinda who sang many fiorature or vocal decorations in her character’s difficult, seldom-performed aria, “Sventurata mi credea” (“I thought I was unlucky”). The stepsisters were expected to create an atmosphere of hilarity. Galka’s Clorinda and Mariya Kaganskaya’s Tisbe kept the laughs coming. 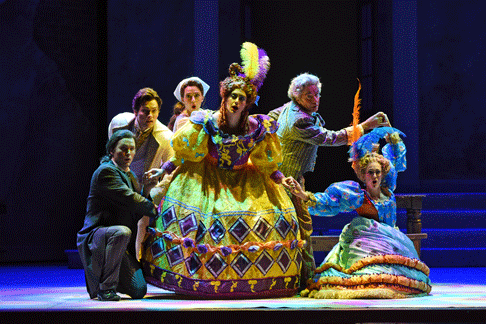 Joseph Lattanzi, Alek Shrader, Daniela Mack, Mariya Kaganskaya, Stefano de Peppo and Katrina Glaka as Dandini, Don Ramiro, Angelina, Tisbe, Don Magnifico and Clorinda
Together, this group of fine artists produced a comic whole that will be remembered long after they have departed for their next engagements. As Angelina, Daniela Mack had a strong voice that cut through the orchestra instead of being heard over it, and featured a huge gleaming bloom above the staff. As Don Ramiro, Alek Shrader’s voice was more lyrical. He sang his long melodic lines with a delightfully sweet, open sound and impeccable coloratura.
Stefano de Peppo who has sung Don Magnifico around the world and across the United States, is known for his large, robust bass-baritone voice. It was fascinating to see him do this role in two different conceptions of the opera, last fall at San Diego Opera and this spring at Arizona Opera. The San Diego company performed a shorter, happier version that cut references to Don Magnifico having supported his household on Angelina’s inheritance. By including that information, Arizona Opera gave good reasons for the Don’s cruelty toward one of his daughters. Best of all, the longer version of the score allowed De Peppo to sing more of his incredibly accurate patter. As the tutor, Alidoro, Zachary Owen was a somewhat mysterious scholar who did not need magic to bring about the fairy tale’s happy ending. 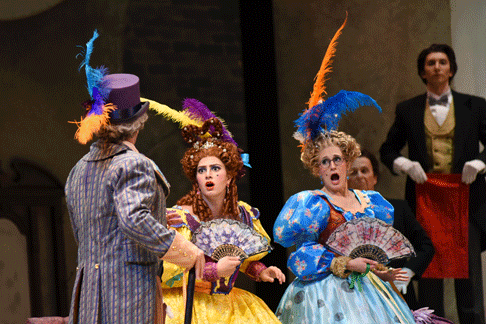 Mariya Kaganskaya and Katrina Galka as Tisbe and Clorinda
Directed by Henri Venanzi, male members of AZ Opera chorus rendered their harmonious music in royal style. Conductor Dean Williamson’s orchestra sounded a bit rough at the beginning of the overture and the singers’ opening lines were slightly off the beat. For the rest of the performance, however, stage and pit were in perfect coordination. I love Williamson’s version of this opera. Clorinda’s aria was a gem to be treasured. This performance of Cinderella was a delight for young and old alike. Both age groups were well represented in this enthusiastic audience.
Maria Nockin