Disarming me with its intimacy and genuine vocal
chemistry, Hume’s staging caught me off guard. The Australian
director’s take on Puccini channelled the vibe of a fresh musical. The
result was an exhilarating, fast-paced show that appealed to the young
audience, cheering many “bravi” throughout the
performance.

Opening the overture, conductor Lahav Shani with dashing aplomb proved to be
the musical impetus. In Hume’s concept, we travel back in time as the old
man recollects his love for Mimì. The audience sees an elderly man all
alone in a chair on stage. By setting the story up as one of Rodolfo’s
reminiscences, Hume instantly saturates Puccini’s bohemia with an even
thicker layer of nostalgic longing. 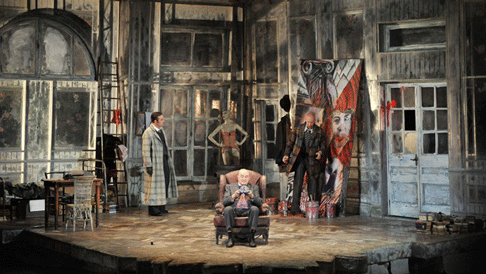 Old Rodolfo reminisces about his past

Deeply moving from the moment she arrived on stage, Kurzak captured the
fragility of her character, presenting the most loveable of Mimìs.
Immediately, in “Si, mi chiamano Mimì”, I became enamored by
Ms. Kurzak’s virtuous portrayal as a delicate Mimì; by the time
she undermines her love for Rodolfo by leaving him in “Donde lieta
usci” in the third act, I was smitten.

Arttu Kataja made for an exemplary Marcello in his lustiness for Anna
Samuil’s buxom Musetta. At Cafe Momus, they sang with zeal to each other,
also joined by Martin Wright’s led choir, which was full of flair. Samuil
downright dazzled as Musetta. Her Waltz certainly was a showstopper without
being too much of a scene stealing moment from the other characters. She made
quite the splash receiving a raucous applause.

Hume effectively contrasted Mimì and Rodolfo’s heartache with
the excellently timed biting banter between Musetta and Marcello. The last act
burst with gut wrenching drama, culminating in a devastating
“Mimì!” from Lasri in utter anguish.

The evening belonged to the Moroccan tenor. The warmth of Lasri’s
voice certainly must have warmed Mimì’s hands, as he sang
“Che gelida manina”, swooning in romance. Onward, Lasri fueled
Puccini’s flames. His voice gushes with personality. He owned Rodolfo. He
has superstar wattage that amplifies his robust resonance, all the while
serving it up with remarkable authenticity. For me it was the first encounter
with this dream tenor, and with great promise, I look forward to Lasri’s
future. 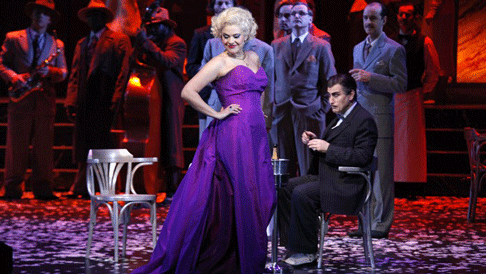 Through his vocal theatricality, Lasri also evokes the most devoted rises
from the other performers. As the loveable musician, Gyula Orendt’s
Shaunard provided the necessary lighthearted overtones. Jan Martiník
marked Colline’s benevolence, selling his coat for Mimì’s
medicine. He turned “Vecchia zimarra” into a captivatingly poignant
farewell to the philosopher’s cherished overcoat. Jonathan Winell
delivered laughs as the foolish landlord Parpignol.

Israeli conductor Lahav Shani began the evening with the Berliner
Staatskapelle quite loudly, but he quickly balanced his orchestra out with the
singers, forming a fine whole. The exquisite saxophone and violin solos touched
me deeply, reflecting Shani’s ear for the moving details in
Puccini’s score. I look forward to hearing his fierce intensity in the
Rotterdam Philharmonic. He will succeed Yannick Nézet-Seguin as
Principal Conductor in September 2018. Shani’s charging energy and the
RPhO’s hot temperament promises furious chemistry.

I confess I don’t get too excited when it comes too Puccini. But this
performance was something else. The intimate duets and boisterous singing
brought out the most of Puccini’s romance and even elevated my
appreciation for the composer. Tonight’s heartbreak put the bohemian life
in its true perspective. But finding another such electrifying production of
Puccini will be rare: by the end of the evening, the skin on my face had
tightened up from all the salt. It felt like I had a facelift.

Photos by Mara Eggert, except as otherwise indicated