It is a rare pleasure to see a production that is peopled by actors that actually look like young, struggling artists. I recall many a version when some, even all of the main quartet of men sported waistline numbers that exceeded even their considerable ages. Not so here, with four male leads whose visual suitability and acting acumen were exceeded only by their consistently sublime vocalizing.
Resident tenor Kirk Dougherty, a company treasure, is rounding out his tenure with a heartfelt, full-throated, unfailingly honest Rodolfo. Mr. Dougherty is an economical actor, but every move has meaning, every phrase has a dramatic subtext, and he has that rare charismatic appeal that immediately engages an audience. His clear, plangent singing can soar above the orchestra with spine-chilling effect, or pare down to hushed introspection that makes his poet a fully realized, well-rounded character. 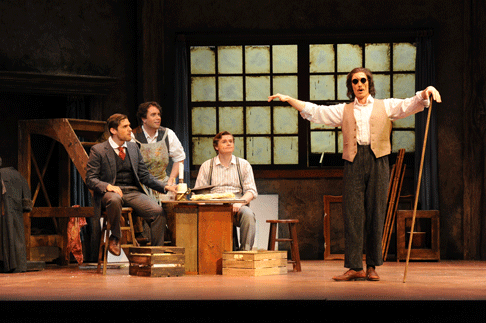 From left: Brian James Myer (Schaunard), Matthew Hanscomb (Marcello), Kirk Dougherty (Rodolfo), and Colin Ramsey (Colline)
Baritone Matthew Hanscom has also contributed many enjoyable performances during his time with OSJ, but none have been more impressive than his beautifully rendered Marcello. Mr. Hanscom sports a big, burnished tone with plenty of buzz and sheen. As the painter, he displays a sense of arching line that is wonderfully controlled and highly satisfying. O MimÏ, tu pi˘ non torni found colleagues Matt and Kirk in perfect sync, vocally and emotionally, and it was one highlight of many in the evening’s music-making.
Colin Ramsey’s participation always raises high expectations, since this talented young bass always brings assured singing and committed stage presence to every role. Mr. Ramsey does not disappoint, scoring a solid success with a wrenching, doleful Vecchia zimarra. Schaunard can sometimes blend into the garret since he has no solo or duet, but with the wiry, animated Brian James Myer in the part, there was plenty of high-viz stage business, and a richly detailed characterization. Mr. Myer deployed his well-schooled lyric baritone in excellent service to the role, singing with characterful presence.
Alone, all four of these outstanding leading men were merely ‘terrific.’ As a quartet of living, breathing, emotive, interactive playmates, they were ‘as good as it gets.’
Not that the distaff side wasn’t of a high caliber. Vanessa Becerra brought a silvery, well-projected soprano to the role of Musetta. Her appealing look and pert demeanor explored every aspect of the flirtatious coquette. And her easily produced lyricism fell agreeably on the ear. I only suggest that the talented Ms. Becerra might discover a little more genuine gravitas for the final act as she keeps exploring the role. 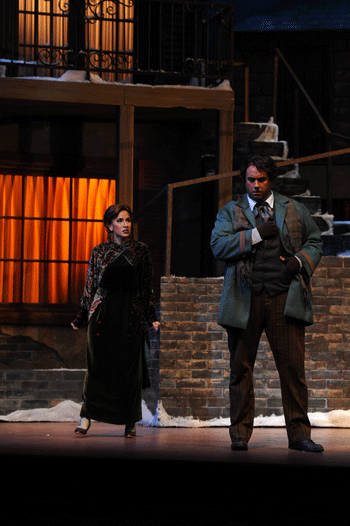 Vanessa Becerra (Musetta) and Matthew Hanscom (Marcello)
Sylvia Lee, who was such a successful Lucia earlier in the season, brought her laudable vocal gifts to the hapless Mimi. During her opening pages, she seemed a bit cautious, as if feeling her way through a role she wasn’t quite convinced was a good fit, and the parlando sections had a slight brittle quality. But once she could get above the staff, Ms. Lee’s approach loosened up, and she showed that all her limpid high notes were in fine estate, thank you very much.
As the evening progressed, her Mimi took on all of the required tragic stature, and her internalized feelings became fully realized in a characterization of tonal beauty and dramatic commitment. By opera’s end, the soprano seems to have convinced both herself and us that she is absolutely a worthy artist to portray the world famous singing seamstress.
Carl King was a relatively youthful Benoit, but his approach was appealing and infectious, and he sang the role with beauty of tone infused with humorous invention. Yungbae Yang intoned Parpignol’s lines with steady precision, and Vagarsh Martirosyan suffered amusingly as a buffo Alcindoro.
Joseph Marcheso conducted with a heady enthusiasm that was joyously urgent. With his cast and a large, responsive orchestra, he sometimes took familiar passages at a faster clip than traditional, but always to good effect. When it came to the expansive Puccini ‘money moments,’ the maestro elicited lustrous results, the kind of goose bump inducing music-making that characterizes the very best interpretations. Andrew Whitfield’s chorus sang cleanly and contributed all the gusto and atmosphere the piece requires.
The company has updated the setting to post-World War One Paris, almost always to interesting ends. Kim A. Tolman’s large-scale set design is a masterpiece of a Monmartr’ian Rubik’s Cube. It turns and repositions, and gets re-dressed and re-purposed with eye-popping results. Twice, the curtain reveal of a new setting garnered well-merited audience applause. Pamila Z. Gray’s lighting was effective in establishing indoor and outdoor locations and times of day, and her textured washes were complemented with good specials and isolated areas. The only rather abrupt cue was when the lovers’ candles went out in Act One. It suddenly got darker out of all proportion to the amount of illumination those two li’l ol’ candles could have been giving off.
The lavish, varied, masterful costume design was provided by Alina Bokovikova. The characters were greatly enhanced by her thoughtful attire, and the delineation of the denizens of the Paris street scene was an embarrassment of visual riches. Christina Martin contributed a thoughtful make-up and wig design, with a clever ‘hair’ effect. When Colline speaks in Act One of cutting his hair, he refers to his long scraggly beard. Sure enough, in Act Two, he is clean shaven. Very thoughtful detail in a production that is rife with such attention.
Michael Shell is a very gifted director who moves his cast through their story-telling with insightful precision. Whether moving crowds of people, or devising meaningful small-scale expressions of character relationships, he proves to be equally adept. One of his greatest skills is that Mr. Shell knows how to place singers in a relationship to the audience so that they are heard to maximum effect in the house. Another is that he devises blocking that unfolds with a natural simplicity and inevitability. I will never forget the moment when Mimi is on her deathbed and calls out the characters’ names one by one. They effortlessly glided into a stage picture of grieving solidarity that was so unerringly lovely that, damn if I am not tearing up again just thinking about it.
There are a few endearing oddities in this update that are mostly intriguing, or at least, not distracting. Colline has been blinded in the war, wears dark glasses, and carries a tapping cane. Schaunard is his attentive care-giver. And (spoiler alert:) ultimately revealed as somewhat more than that. The parade in Act II is a victory march imagined to be passing in the audience, with actors waving French and US flags. A banner in English seemed out of place. But even with these few well-intended ‘gilding of the lilies,’ this was a winning, thought provoking, lovingly rendered, treasurable La bohËme.
Opera San Jose’s next season promises much. As this triumphant season closes with such a flourish, it will have much to live up to.
James Sohre