Domingo’s costumes featured form fitting, slinky long gowns. In Act I, raven haired Violetta arrived in a town car wearing silver-tinged white. For Flora’s Act III party, Violetta wore sparkling black while Flora hosted in copper-trimmed splendor. The men sported perfectly coordinated formal wear of the era. Flora’s dancers performed in minimal metallic costumes that underscored the Egyptian lines of Kitty McNamee’s choreography.
Domingo’s scenic designs included iconic furniture for Act I, an autumn garden for Act II, a chic salon with shiny black and gold pillars holding up a balcony for Act III and a huge bed beneath a star-filled sky for the fulfillment of the tragedy in Act IV. Most of Alan Burrett’s lighting functioned well but there was a tiny light spill atop the shiny black proscenium. 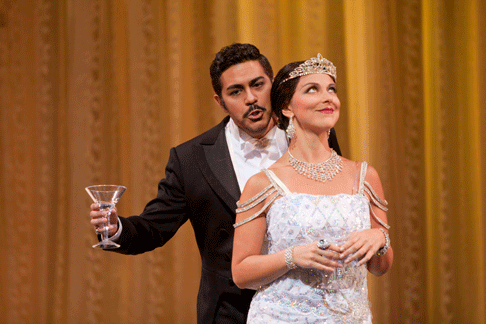 Jes˙s Garcia is Alfredo Germont and Corinne Winters is Violetta ValÈry
Conductor David Agler, the artistic director of Ireland’s Wexford Festival, kept the orchestral accompaniment in propulsive mode with pleasant, appropriate tempi. Occasionally, he made a smaller voice difficult to hear, but I enjoyed his knowledgeable approach to the score. Chorus Master Bruce Stasyna’s group moved like individual couples as they sang their secure harmonies.
The Violetta, Corinne Winters, had no trouble being heard and she gave an engrossing rendition of her role. Winters’ interpretation showed the audience both the public glamor of the celebrated nineteenth century courtesan and the private tragedy of the real woman’s illness ending in death at the age of twenty-three. Winters displayed Violetta’s longing for a normal life in “A forse lui” (“Perhaps he’s the one”) but she soon tossed that aside with wonderful coloratura runs in “Sempre Libera” (“Always Free”). 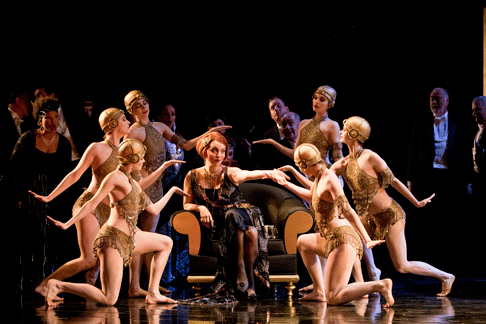 Peabody Southwell is Flora Bervoix
Winters’ vocal and physical acting in the ensuing acts made her Violetta truly memorable. The recipient of undeserved insults in Act III, she became a tragic heroine in Act IV as she struggled to stand and dream of a life with Alfredo. Eventually, when she sang that love and understanding had come far too late, many audience members were in tears as the opera ended.
As Alfredo, tenor Jes˙s Garcia sang with bronzed tones. He was a stalwart consort for Winters, although he seemed to be plagued by allergy during his second act aria. Stephen Powell sang the often-ungrateful part of Alfredo’s custom-bound father, Germont. Powell’s large, resonant voice enchanted the San Diego operagoers, and they greeted his aria “Di Provenza il mar, il suol” (“The sea, the soil of Provence”) with momentous applause. 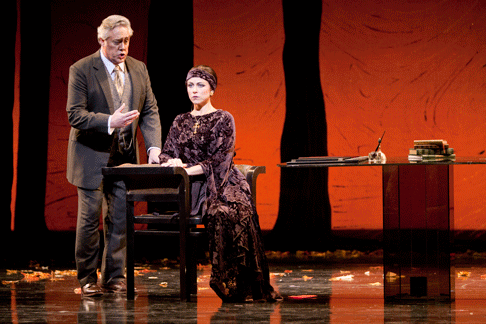 Stephen Powell is Alfredo Germont and Corinne Winters is Violetta ValÈry
Peabody Southwell was an unusually dramatic Flora and Tasha Koontz sang beautifully as Annina. Kevin Langan’s distinctive bass sound defined the role of Dr. Grenvil, while the rich voices of Brenton Ryan, Scott Sikon, and Walter DuMelle filled out the roster of upper class partygoers. Solo Dancer Louis Williams seemed to defy gravity with his leaps, and he proved to be a skilled partner as he danced a mini pas de deux with each member of the corps de ballet.
It was a delight to again be in the Civic Theater where San Diego Opera has presented so many fine performances. Next season the company will present six shows: Gilbert and Sullivan’s The Pirates of Penzance, Puccini’s Turandot, and Catan’s Florencia in el Amazonas will be found at the Civic Theater while two chamber operas, Kaminsky’s As One and Piazzolla’s Maria de Buenos Aires, will be seen at the Joan B. Kroc and Lyceum Theaters. Finally, San Diego opera and the San Diego Symphony will get together for a concert starring RenÈ Barbera and Lise Lindstrom at Balboa Theater.
Maria Nockin