It’s the bank holiday weekend and the sun is shining, both here in London
and over the wheat fields and haystacks of 1950s rural Italy as conjured by
Laurent Pelly and designer Chantal Thomas for their 2007 production of L’elisir d’amore, which is back at the ROH for its fourth revival.
Last time round, in 2014, the big draw was Bryn Terfel making his first
essay at the role of the fraudulent quack. On this occasion, we had the
opportunity to hear both exciting ‘newcomers’ to the House, with South
African soprano Pretty Yende making her ROH debut, and familiar returnees,
with Italian bass-baritone Alex Esposito stepping into the duplicitous
doctor’s boots for his role debut. 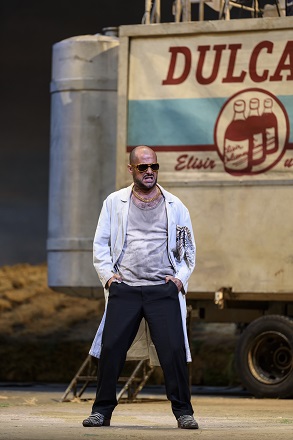 Three years ago, I described Terfel’s Dulcamara as ‘less sleazy
smooth-operator and more grimy grease-ball’. Esposito’s swindler is even
nastier: a veritable bruiser. Unshaven, dirty, with tattooed biceps and a
contemptuous sneer, this Dulcamara’s dodginess couldn’t be hidden by
designer shades and a scruffy white lab coat. No wonder the villagers
scattered in advance of his arrival despite their excited chorus of
expectation, but the strength of his call to his customers – ‘Udite, udite,
o rustici’ – compelled, rather than charmed, them back. Esposito’s tone was
wonderfully firm and strongly coloured. There was simply no arguing with
his bullish self-promotion, as his side-kicks peered mischievously from
beneath the dilapidated medic-truck watching their master humiliate and
fleece his dupes. This Dulcamara could barely take the trouble to feign
professionalism or concern, so gullible were the eager elixir-gulpers, and
a grimy white ti-shirt poked out beneath the sleazy red suit he donned for
the nuptial celebrations. In contrast, Esposito took great care with the
text and the line; the grace notes in ‘lo son ricco’ were deliciously deft
as the doctor made his pitch for Adina.

Pretty Yende’s Adina could look after herself though. Yende’s voice is
plumper and more ample than the crystalline soprano of Lucy Crowe who took
the part in 2014, and this gave Adina more obvious presence and
self-possession: she pouted and posed with the panache of a 1950s Hollywood
starlet. If Yende had any nerves on her first night at Covent Garden, she
didn’t show them: her soprano was full and warm from the off, and she
strolled through the arias with the ease, beauty and grace with which Adina
lounged on the haystacks beneath a parasol. She was a feisty match for
Liparit Avetisyan’s Nemorino in their Act 2 duet; the pause at the close
was judged perfectly, allowing us to register the strength of the fiery
emotions. But, Yende had the full measure of Adina’s heart and allowed her
essential tenderness to shine through – as when revealing the extent of
Nemorino’s delusions (he thinks because he worships her, she must
return his love) to Belcore. Her Act 3 ‘Prendi, per me sei libero’ was
absolutely exquisite, the coloratura roulades tumbling like jewels, the
highest reaches clean and pure. It’s been quite a month for Yende: she’s
won the International Achiever Award at the 23th annual South African Music
Awards and her Sony Classical release, A Journey won the 2017
International Opera Award for Best Recording (Solo Recital). There will
surely be many more such accolades. 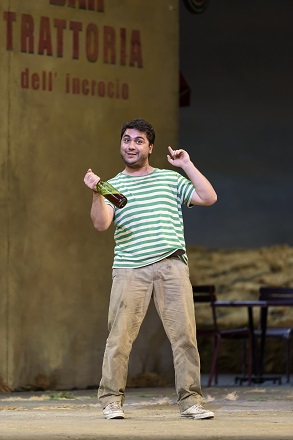 Armenian tenor Avetisyan made his ROH debut earlier this season (as Alfredo
Germont in Il traviata) and found himself back in the House
following the withdrawal of the previously advertised Rolando VillazÛn took a while to warm up as Nemorino; initially a rather rapid
vibrato made his tenor somewhat tight and he was occasionally just under
the note. But, as the ‘elixir’ (a bottle of Bordeaux) worked its magic, so
Avetisyan relaxed into the role, and his impish charm – he hoisted a bale
aloft with nonchalant swagger, and his chirpy knee-and-elbow wiggle of glee
raised a grin – was as winning as his appealing, pliable tenor. The big
test was, as always, ‘Una furtive lagrima’, and Avetisyan sailed through;
unaffected and focused, he let Donizetti’s expressive lyricism do the work
and the aria cast its spell – time stood still as if the whole House held
its breath. 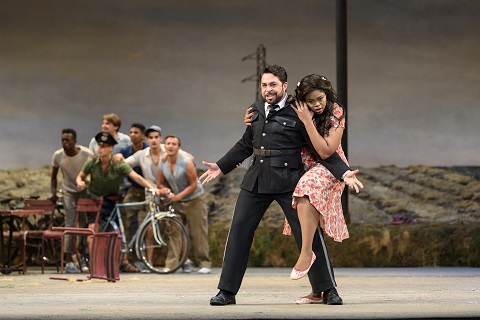 Paolo Bordogna made an impressive ROH debut as a ridiculously pompous
Belcore, accompanied by two ‘warriors’ whose mismatched heights and
over-enthusiastic goose-stepping added to the preposterousness of their
boss’s cocksure conceit. Bordogna enjoyed his character’s pretentiousness,
adding some neat details – chest-thumping through a trill, hip-twisting
when demanding that Adina ‘Name the day!’, and launching into some
impressive acrobatic tumbles down the haystack. His zealousness was not
neglected either: Bordogna seemed to have Adina in a head-lock at one
point, from which she struggled to extricate herself.

Jette Parker young artist, Vlada Borovko, has impressed me in the past (see

) and here she was a rich, vibrant Giannetta who relished the opportunity
to play to the crowd when delivering the latest gossip about Nemorino –
she’s got the news from the haberdasher, so it must be true.

The ROH Chorus occasionally found it difficult to pick up conductor
Bertrand de Billy’s beat – the opening ensemble was a bit scruffy and de
Billy’s zippy accelerando in the closing scene of Act 2 wrong-footed them
for a while. But, they kept cool heads and were in fine voice; the blocking
and acting was precise and nuanced. The overture felt a bit ‘solid’ and I’d
have liked a bit more brightness and sparkle from the ROH Orchestra but the
playing was, as always, accomplished.

This was a beguiling evening which got better and better as it went on. The
cast were committed to the drama, and there was an occasional sense of
spontaneity which added a charming freshness (though, reassuringly, Alfie
the dog and the bicycling sweethearts were back). The dashes of realism –
the piles of rotting tyres and wonky lampshade that frame the sets of Act
3, the louring clouds on the back-cloth that seem to threaten storms ahead
– were outshone by Nemorino’s heart-warming love, optimism and belief. In
uncertain times, it’s good to be reminded that sometimes hopes and dreams
do come true.