Her lover, Cavaradossi, was an artist who preferred an out of favor political party and he helped hide an escaped political prisoner that Baron Scarpia, the chief of police, wanted to keep incarcerated. Scarpia was a womanizer who would have enjoyed a night with Tosca, after which he would have destroyed her as used goods. Caird did not pull any punches and he made his world every bit as brutal as that of twenty-first century television shows.

Scenic designer Bunny Christie showed us the appropriately dim Church of Sant’ Andrea della Valle with a three story high scaffolding that held Cavaradossi’s enormous madonna-in-progress. In Act II, Scarpia’s apartment in the Palazzo Farnese was filled with boxed and partially unpacked works of art, evoking the realization that the police chief stole art wherever he found it. For her last act, Christie designed an execution room atop the Castel Sant’Angelo that focused the sound of the voices.

With movie-star good looks and a large, silvery dramatic voice, Sondra Radvanovsky was the perfect embodiment of Puccini’s early nineteenth century opera singer. She colored her tones to fit each circumstance and emphasized the intensity of her emotions with the passionate phrases of “Vissi d’arte” (“I have lived for art”). Her character grew from the naÔve ingÈnue in Act I to a reluctant killer in Act II. In Act III, she hoped for life with Cavaradossi in a new country. Having discovered Scarpia’s deception, she brazenly proclaimed her intent to meet him before God and jumped into eternity. 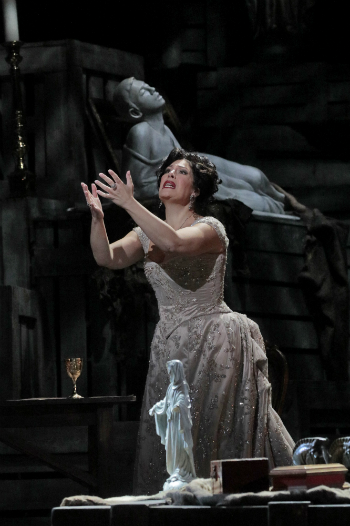 Puccini asks his tenor to sing the aria “Recondita armonia” (“Obscure harmony”) very soon after his first appearance on stage, and fully warmed up, Russell Thomas sang it with the golden sounds of a solid, well-honed tenor voice. I would like to hear more of him soon. Ambrogio Maestri was physically imposing and his manner made Scarpia a sadistic bully. The possessor of a powerful baritone voice, he sang with slightly rough bronze tones that underscored his character’s unrefinment. Only when he offered Tosca holy water in the first act was he the slightest bit polite.

Scarpia’s aides, Brian Michael Moore as Spoletta and Daniel Armstrong as Sciarrone, followed his lead dramatically and sang with dark tones. Nicholas Brownlee, as Cesare Angelotti, however, had a much brighter sound and interpreted his character as though he might once again hold high office. Veteran bass-baritone Philip Cokorinos was an amusing Sacristan who gave just the right comedic touch to this tragic opera.

Conductor James Conlon brought out the drama of Puccini’s music in what is said to be his seventieth rendition of the opera. Thursday night’s show was only his second performance of the work in LA, however, and he showed this audience his distinctive, carefully crafted, richly detailed interpretation. Grant Gershon conducted the adult chorus and Anne Tomlinson directed the children’s group who led the jubilation of the Act I “Te Deum.” Tosca is an opera that needs to be performed with significant individual interpretations and this was a fine representation of Puccini’s masterwork.