The new production debuted at the Wales Millennium Centre on Sunday 4 June
2017 conducted by Tom·ö Hanus, the company’s new music director, with
Rebecca Evans making her role debut as the Marschallin, Lucia Cervoni as
Octavian, Brindley Sherratt as Baron Ochs, Louise Alder as Sophie, and
Adrian Clarke as Faninal. Designs were by Niki Turner, with lighting by Ian
Jones.

Strauss and Hofmannsthal’s Der Rosenkavalier is a complex
theatrical mechanism which seems to defy radical re-working and Fuchs has
not tried to re-invent the opera whilst still providing a way of seeing the
plot anew. All the familiar details and the essential dramaturgy were
there. Like many recent productions, Fuchs and Turner had set the opera in
1911, the year of its composition but the very opening showed us that this
was not an entirely traditional take on the piece. During the prelude
(which depicts the Marschallin and Octavian making love), we did indeed get
flashes of the two characters in vigorous sexual positions, but the main
focus was of an old woman, the old Marschallin (Margaret Balton), sitting
remembering holding a small picture in 1949.

The old Marschallin would be present for much of Act One, and a quotation
from Rilke plus the sands of time running through Turner’s stripped-back
yet traditional set gave us an indication that the idea of time would be
important to the production. In Act Two the same essential set was
partially skewed and the sands of time had started to form piles in the
corners. For Act Three, the set was partially de-constructed and sand
formed huge piles. The old Marschallin returned at the beginning of this
act, still remembering but this time video footage seemed too evoke series
of convulsive conflicts that we know would erupt between 1911 and 1949.
Thankfully, this meant that the normal comic dumb-show of setting up the
joke was abbreviated.

At key moments during the opera the old Marschallin (Balton) and the
younger one (Rebecca Evans) seemed do interact, and it was unclear whether
we were experiencing the older woman’s flashbacks or the younger one’s
flashes of premonition, and of course during the opera the Marschallin does
indeed become increasingly obsessed with time. At the very end, Fuchs
allowed herself a small joke. Strauss intended the final orchestral
postlude to depict the Marschallin’s page Mohammed returning to the inn to
find a lost handkerchief, one last jeu d’esprit. And indeed Mohammed (Kayed
Mohammed-Mason) did appear but this time as an old man, still serving his
mistress.

Rebecca Evans made a touching and thoughtful Marschallin, much given over
to the emotions of the moment; this was a highly volatile performance with
Evans beautifully reflecting the changing emotions of the text. Text was
highly important, and Evans clearly was concerned to make the text as
important as the music. Truly lyric soprano Marschallin’s are relatively
rare, and Evans performance really did make you think of Sophie grown
older. Evans’ voice lacks the heft to really impose itself, and
occasionally I thought that Tom·ö Hanus could have helped a little in the
balance, but Evans never forced and sang with a profoundly beautiful sense
of phrasing. This was not a luxuriant voice, instead it was touching, with
Evans occasionally taking the risk to really fine her voice down to
stunning effect. Clearly Evans has a long career as the Marschallin ahead
of her, and this assumption was a notable achievement. 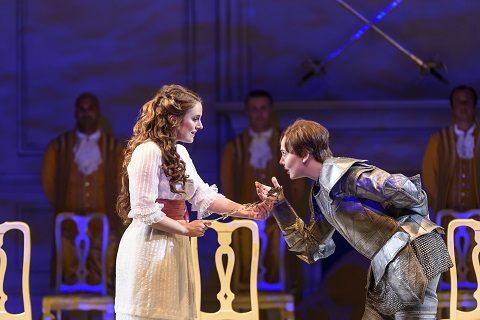 Louise Alder’s Sophie was perhaps less headstrong than some we have seen
recently, and Alder really conveyed the sense of Sophie still struggling to
find her way in the world, sometimes bewildered sometimes angry, and
somewhat confused by the sudden rush of her relationship with Octavian.
Alder brought the ability to finely spin a line, but also to demonstrate a
strong feel for character.

The Canadian mezzo-soprano Lucia Cervoni (a principal at Theater Magdeburg)
made a nicely touchy Octavian, not a little self-obsessed and very much on
his dignity. Cervoni very successfully showed the way the young man
struggled both with the Marschallin’s philosophising in Act One, and with
the sudden rush off young love in Act Two, bringing out the sense of
youthful impulsiveness. This is an opera very much defined by its
relationships; Evans, Cervoni and Alder really established the sense of the
different pulls in this triangle, so that when all three characters met for
the first time at the end of Act Three we got a strong sense of the
different tensions, with many pregnant pauses. Cervoni was successfully
able to lighten her voice in the upper register so that the three women
blended beautifully for a radiant final trio and duet. 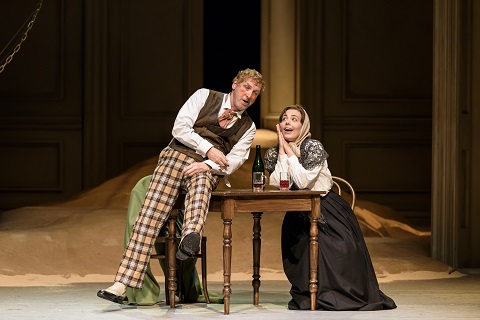 Into all this blunders Brindley Sherratt’s comically self-obsessed Ochs. A
hilarious, key moment was in his Act One scene with Evans’ Marschallin when
Sherratt’s Ochs comically motored on with his speeches, blissfully unaware
that the Marschallin was not paying him any attention. It was this blissful
unawareness of other people’s reactions which made Sherratt’s Ochs such a
comic monstrosity, his self-image never punctured until the Marschallin’s
biting retort at the end of Act Three.

What really brought the production alive was the constant sense of detail
in the characterisation, not only had Fuchs clearly worked with her
principals but these major characters were set against a welter of smaller
details. In a sense this was a superb ensemble production, and this really
counted when it came to providing a setting for the complex relationships
between Evans, Alder, Cervoni and Sherratt’s characters. Only a couple of
moments seemed too generic, or jarred; Ochs retainers in Act Two could have
come from a number of productions, whilst the characterisation of his son
Leopold (George Newton-Fitzgerald) verged in the patronising, but overall
there was a feeling of the production being vividly thought through. This
was certainly helped by Niki Turner’s stylish period costumes (though I
would have preferred something other than cod-armour for Octavian in Act
Two).

The sense of detailed characterisation paid off when combined with Tom·ö
Hanus superb pacing of the opera, so that the action flowed smoothly and
there were few, if any, of the longeurs which can occur (particularly
towards the end of Act 2). I have no idea what the exact timings were, but
this felt like one of the swiftest accounts of the opera that I have heard,
not because Hanus’ speeds were fast but because the drama flowed and held
one’s attention. Even complex scenes such as the Marschallin’s levÈe were
filled with lovely little details which, rather than holding up the action,
simply made the drama fall into place. 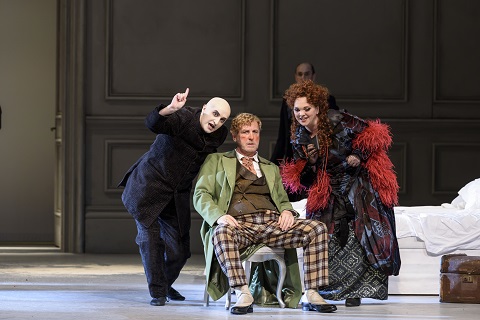 Providing this back-drop was a fine array of supporting characters. Adrian
Clarke’s Faninal was superbly characterful and his Act Two outburst made
far more of a dramatic impact than often is the case. Peter Van Hulle and
Madeleine Shaw as the intriguers were a delightfully over the top couple
(who even got their own enthusiastic sex-scene at the opening of Act
Three!). Paul Charles Clarke made a fine Italian tenor, very much obsessed
with the effect he is having on his potential patron, Matthew Hargreaves
was a finely upright commissar of police. Angharad Morgan’s Marianne
Leitmetzerin managed to combine vividness with very fine diction (which
does not always happen in this role). Morgan is a member of the WNO Chorus
and the production was notable for the number of chorus members in small
solo roles.

This was not the most luxuriant of performances, with cast with largely
lyric voices you felt that in Act One Tom·ö Hanus could have been a little
more aware of the balance. But Hanus had a good feel for the music’s flow,
keeping it moving whilst allowing a nice fluidity and giving the singers
space to shape their lines. The orchestra responded well to Hanus’
direction and produced a performance which finely complemented the singers
in its musicality.

This was a notable achievement from the whole company, and I certainly hope
that we do not have to wait too long to see the production again. WNO’s new
production of Der Rosenkavalier is at the Wales Millennium Centre
on 10 & 17 June, and at the Birmingham Hippodrome on 1 July 2017.