Moreover, 1930s ocean-going offered a panoply of pleasures and luxuries:
the Queen Mary featured everything from indoor swimming pools and beauty
salons, to libraries and outdoor tennis courts. Just the right leisured
milieu for a libertine hedonist eager for a ‘good time’. Irish’s visually
arresting design allows the centre of the deck to crease backwards,
revealing evocations of the smoking rooms, grand salon, richly decorated
with art deco details. Dramatically, too, an ocean liner seems a
potentially acute setting. Britten’s Billy Budd confirms just how
the claustrophobic tension can rise aboard ship, and unless he takes to a
life-boat, there will certainly be no possibility of the Don escaping his
pursuers mid-ocean.

But, peer a bit closer, and the rust spreading between the steel panels is
disconcerting. In the event, the concept proves a bit leaky too. One
problem is the strict class stratification on board: strolling on the Sun
Deck, or dining in their exclusive restaurants, first-class passengers such
as Donna Anna and Don Ottavio would never cross paths with the likes of
Masetto and Zerlina, who would be confined in cramped third-class
cubby-holes in the bowel of the ship. In fact, what are Masetto and Zerlina
doing on board in the first place? They haven’t even married yet!

Two of the crucial dramatic features of Don Giovanni thus run
aground on Platt’s idea. First, Don Giovanni’s ‘slipperiness’ – his ability
to make himself at home amid company from any social class – is essential
to his musical identity, or lack of it: for, apart from the
‘champagne aria’, Giovanni has no real aria of his own and instead adopts
the musical idiom of those he is attempting to charm. But, class-crossing
between the staterooms and the Starlight Club of first-class and the lower
realms of steerage just wouldn’t be possible on board in the 1930s. Thus,
the opera’s political radicalism is also weakened. When Don Giovanni offers
to host a wedding feast for Zerlina and Masetto, he does so to deflect the
latter’s jealousy, using his wealth and status to take advantage of the
peasant pair. But, in Platt’s production, Giovanni comes across the wedding
party when he’s wandering, implausibly, around third-class decks, and when
the masked aristocrats later appear too, their cries – ‘Viva la libertÈ!’ –
have lost their dramatic context. 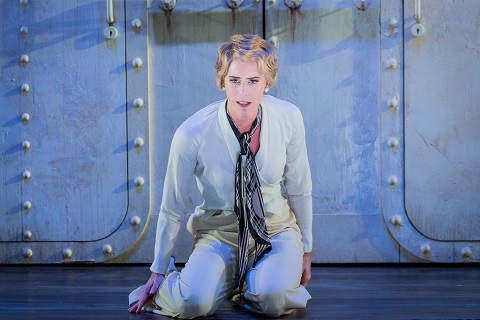 But, perhaps this is to take it all a bit too literally. One advantage of
Irish’s design is that it pushes the singers to the front of the stage and
reflects their voices back into the large auditorium, helping them to
project across the orchestra, who are not housed in a pit. However, it does
mean that there is not a lot of space for the sort of ‘stage business’
which creates both tension and humour; a case in point was Zerlina’s
‘Batti, Batti’ which seemed, in terms of the drama, rather like driftwood.
At times, Platt must resort to ‘gags’ – albeit often witty – to create some
energy, such as when Zerlina attempts to ‘hide’ behind the celery stalk in
her cocktail glass. Elsewhere, things take an unexpectedly violent turn:
there’s blood on the walls when the Commendatore is stabbed and Giovanni
threatens Donna Anna with a revolver before making his end-of-Act 1
getaway. 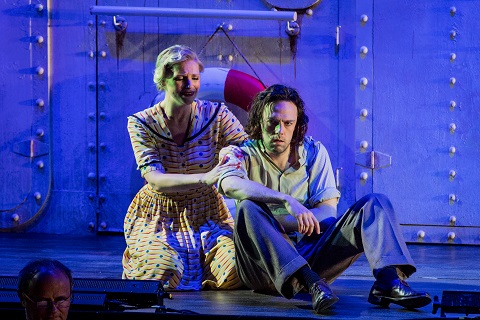 The centre of the stage does open up, though wisely Platt does not allow
the angled rooms to recede too far. The complicated Act 1 ending is
well-choreographed and a sense of intrigue is created when, in Act 2,
Leporello and his master change cloaks and we zip between various cramped
cabins. But, some of the set-piece arias are a little too ‘set’. Leporello
literally teaches Elvira a lesson, as she sits before a blackboard and
chalks up the Don’s conquests – you do the Maths, the schoolmaster seems to
mock! Don Giovanni’s champagne aria is delivered as he attempts to change
for dinner in a cabin which brought to mind Charles Dickens’ description of
one of Cunard’s cabins as a ‘profoundly preposterous box’.

Fortunately, the talented young cast do much to stabilise the rocky vessel.
As the eponymous libertine, Ashley Riches looked debonair in his light-tan
sports-suit, Panama hat and two-tone shoes, and he demonstrated a vocal
suavity to match in ‘L‡ ci darem la mano’. Riches’ tone was firm and warm
throughout, cunningly veiling his contemptuousness; he had the breath
control to whirl through the champagne aria, too, despite having to
simultaneously squeeze into evening dress in a cupboard. 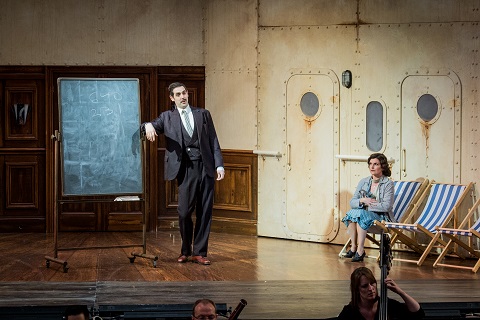 John Savournin was an effective partner for Riches; Savournin made
Leporello more sympathetic than is sometimes the case, revealing the
natural comic timing which was in evidence when I saw him perform in WNO’s

Of the trio of duped women, Lauren Fagan shone brightest, as Donna Anna,
injecting real drama into both recitatives and arias. The Australian’s
soprano is powerful and bright, and she mastered the vocal acrobats of ‘Non
mi dir’ with ease. As her consort, Ben Johnson struggled a bit with Don
Ottavio’s ‘Il mio tesoro’, seeming to need a slightly broader pace than
that set by conductor Dane Lam.

A year ago, I enjoyed Ellie Laugharne’s Zerlina for Classical Opera at
Cadogan Hall, and she charmed with the same sweetness of tone and wicked
sparkle here, forming an effective contrast with Victoria Simmonds’ fervent
– sometimes quasi-hysterical – Elvira. Simmonds’ was not entirely on top of
the role’s demands – the intonation strayed at the top – but this was a
convincing performance dramatically. Ian Beadle (Masetto) and Graeme
Broadbent (Commendatore) also gave accomplished performances. The latter’s
bass had lots of colour, helping to make the vengeful patriarch a more
credible figure, in the absence of a statue, after he’s spent most of the
opera on a slab in the ship’s food refrigeration unit – one dreads to think
what was served for dinner.

Dane Lam drew forthright playing from the City of London Sinfonia, though
at times it was lacking in stylishness; the Opera Holland Park Chorus were
in good voice.

Unable to conjure the fires of hell in the middle of the Atlantic, Platt
has Giovanni plunge overboard and meet a watery end. Overall, there is much
fine singing to enjoy in this Don Giovanni, and no doubt the cast
will settle into their roles as the run progresses. But, I couldn’t help
thinking that the production itself is not waving but drowning.