Originally staged in 2011 by Italian actor and theater director Gabriele Lavia, a sometime Nicola Luisotti collaborator for opera productions in Italy and Japan, this SF production hung twenty two huge, framed mirrors that flew in and out of an empty black space. Lavia did sometimes move the action among them, but usually he simply paraded the protagonists back and forth across the front-of-stage where maestro Luisotti could keep them under his baton.
The mirror metaphor can indeed be visually effective, and it does infer all sorts of conceptual profundity. But mostly it simply reflects what is and then simply asks what it all means. Responding to this lack of content San Francisco Opera brought in an alternate director, Italian theater director Jacopo Spirei who brought with him Tommi Brem, a theatrical video designer. No longer reflections, the mirrors framed video portraits of characters of interest to whomever might be singing an aria. This was only sometimes. Usually the frames were blank. 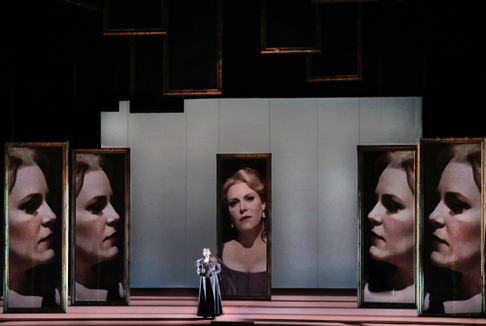 Erin Wall as Donna Anna plus Donna Anna in video image
It all ended with the face and hands of the consumed Don Giovanni plastered on a number of frames, evidently trying to get back in. Or something.
Though Luisotti was no longer in the pit, the protagonists still crossed and re-crossed the front-of-stage pathway to sing the arias we know so well. The new conductor was Marc Minkowski, once famed as an early music conductor now general director of OpÈra National de Bordeaux. Minkowski is not insensitive to what happens on stage — as example his conducting of the 2013 inebriated production of Don Giovanni at the Aix Festival was absolutely wacko. In keeping with this production however he gave us the score exactly as written, his quick, very quick tempos avoiding any exploration of the score whatsoever. And that is what was on the stage.
The splendid San Francisco Opera orchestra did indeed keep the pace, but the smooth sounds of a modern symphony orchestra do not give the bite and scratch needed to articulate the phrasing and structure of a Mozart score at such speed. Arms flailing in the overture Minkowski did indeed let us know he is a divo. His pit erected an orchestral entity that remained haughtily separate from the world of the stage — even though evidently he fully knew what was there. The finales of both acts I and II were a mess. He could not have cared.
Even so it was, after all, Don Giovanni, and there was a cast well qualified to perform the roles. Thus some of the magic of the masterpiece did shine through from time to time. All excellent singers, they were seven artists in search of a production.
Da Ponte’s characters came straight off the pages of the score, no deeper exploration at all, i.e. the production asked no questions (though no doubt these artists had many). Ildebrando D’Arcangelo, the Don Giovanni, was seductive, defeated and unrepentant. Leporello, sung by Erwin Schrott was quick, articulate and knew the score (no puns intended). Donna Anna, sung by Erin Wall, was indeed aggressed by the Don and indeed suffered, Don Ottavio, sung by Stanislas de Barbeyrac, fully understood her need of a year to recover. Donna Elvira, sung by Ana Maria Martinez, was sillily obsessed by the Don. Zerlina and Masetto, sung by Sarah Shafer and Michael Sumuel, gamely did their thing. 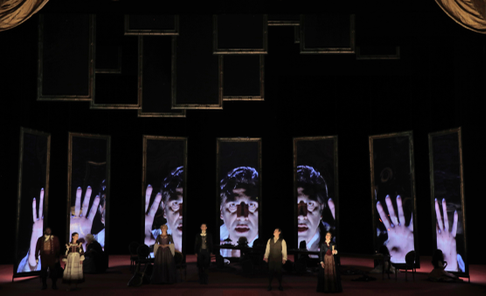 All principals in Epilogue and final video image of Don Giovanni
No doubt the simulcast of the opera house performance onto the score board of AT&T stadium on June 30 is the place to get the best of this Don Giovanni. On-screen opera focuses on the faces of the performers rather than on the production.
Michael Milenski