The production is set in a Naples of the 1950s. But this is a witty
picture-postcard Naples, with clean-cut healthy gypsies, and sunny
temperaments all round; Francis O’Connor’s giant postcard forming a
backdrop from which Fiorilla (Sarah Tynan) and Geronio’s (Geoffrey Dolton)
house appears, and the prow of Selim’s (Quirijn de Lang) yacht dramatically
pierces through. Prosdocimo’s (Mark Stone) balcony overlooking the bay is
always in view, and we see Prosdocimo at work constantly throughout the
opera.

Duncan’s production was very much a combination of music and movement, not
for nothing was Nick Winston movement director and assistant director. Each
solo and ensemble was carefully and wittily choreographed, in a way which
charmed and delighted yet emphasised the artificiality of Rossini’s drama.
Yet Duncan and Winston never pulled focus, and the show was a brilliantly
entertaining piece of musical theatre which ensured that we always
concentrated on the right people on stage. The large set pieces mirroring
Rossini’s big ensembles were a particular delight.

As yet the production seems slightly under-cooked, as if there has not been
quite enough rehearsal time on the Garsington stage. I was aware of small
ensemble problems, and the fact that complex vocal ensembles are
accompanied by complex movements does make the production a particular
challenge. For the first time since coming to Garsington Opera’s new home,
I was aware of the sheer width of the stage, perhaps because Francis
O’Connor’s set, with its large postcard back drop set at an angle, was
rather acoustically unhelpful, projecting sound at an angle.

In many ways Il turco in Italia is one of the most human of
Rossini’s comedies, and the character’s less cardboard cut-out than some.
But Duncan’s production seemed to be encouraging us to enjoy the piece as a
mechanism, and it did not always bring out the humanity of the characters.
Perhaps, once the production has bedded in this will happen more, but you
felt that the cast were concentrating more on performing a show for us
rather than interacting as characters. There were, however, strong
individual performers and those returning to the production (Quirijn de
Lang, Mark Stone and Geoffrey Dolton) were most successful at making us
care for their characters.

Mark Stone, on stage for most of the time and often acting as puppet
master, really made the show. His is not always a natural Rossini voice,
but he brought a frankness, openness and vivid sense of character to
Prosdocimo which made you care for him, and made his need to find a plot
and write his play really matter.

Quirijn de Lang in the title role as Pasha Selim really looked the part,
even managing to look suave, elegant and sexy in a series of embarrassing
be-jewelled mini-turbans. De Lang moved with suaveness and elegance, and
really encapsulated the sort of untrustworthy lounge-lizard familiar from
films (though to characterise a Turk like this seemed, perhaps, borderline
racist). But this is a Rossini buffo bass part (the original singer also
created Mustafa in L’Italiana in Algeri), and whilst I can
understand the wish to try to re-invent the character somewhat, I would
have liked a little more vocal swagger from De Lang. He sang Rossini’s
vocal lines efficiently though his passagework was a trifle smudgy, I would
have liked more vocal bravura.

Sarah Tynan brought real vocal fireworks to the role of Fiorilla and her
account of Fiorilla’s final aria, when she thinks she is being divorced by
Geronio, managed to combine bravura singing with the right degree of
pathos. Selfish and uncaring of the men around her, Fiorilla is not the
most sympathetic of characters, and for most of the opera we could admire
the beauty of Tynan’s singing and the incredibly stylish figure she cut on
stage without really caring for Fiorilla. But perhaps this is churlish
given the complexity and elegance of Tynan’s singing. 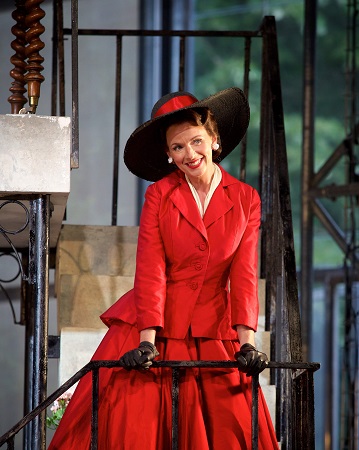 Katie Bray, as Selim’s former lover Zaide, had perhaps an easier job to
make her character sympathetic as the wronged innocent, but Bray really
made Zaide count. She combined a vivacity with warmth of tone, and created
a real sense of character. Geoffrey Dolton had the gift of being able to be
terrifically funny, whilst still making us care for poor put-upon Geronio,
constantly being imposed upon by his wife. Luciano Botelho bravely essayed
the challenging role of Narciso with its high-wire acrobatics (it was
written for Giovanni David who created Rodrigo in Otello and whose
range went, easily, up to high F). Botelho has an attractive lyric tenor
voice with a delightful stage presence, but when singing in alt his voice
had a tight, edgy quality. Some of this may indeed be first night nerves,
but you felt that a more acoustically helpful set might have added a little
warmth. Jack Swanson made a very personable Albazar and you wished that he
had more to do.

In the pit, David Parry drew some not unstylish playing from the orchestra,
though we were also aware of the challenge of keeping some of the ensembles
on track.

This was an enjoyable evening in the theatre, with some brilliant
theatrical moments and engaging singing. Most of the audience will have
gone home happily entertained, but I felt that the production had the
capability of being something much more.