It made me laugh (and in a “good way”).
Productions of this least performed of Mozart’s mature operas usually are stiffly formal, with somber recitatives serving mostly as a respite from one extended aria after another, often posing as more a costumed concert than a viable dramma per musica.
Director Stephen Lawless and a witty translation by Daniel Dooner may have changed all that forever. Political intrigue still looms large in the telling of the story (how could it not?), but the plot twists hinge on a sex-kittenish Vitellia leading Sesto around by his . . .da capo aria. Have you ever laughed out loud as this villainess vamps the conflicted patrician? Has anyone? We did! 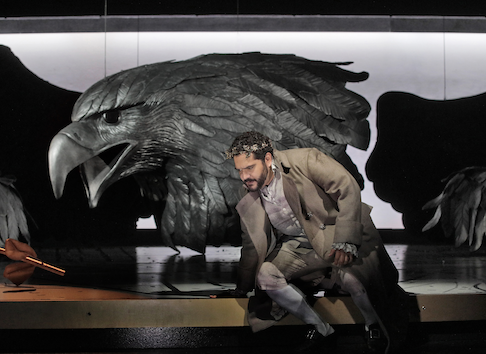 RenÈ Barbera
This does not mean to suggest that Mr. Lawless has encouraged gratuitous schtick. No, rather he has rooted the character relationships in truthful interaction, underscoring the naughty, lethal game being played out by a vengeful, power hungry daughter of the deposed emperor. He also understands that there is much about the piece that is uncompromisingly dramatic, infused with profound human emotions. He trusts that those moments will take care of themselves and be even better for some light-footed balance. His effective use of the playing space included having the chorus positioned in the house aisles for the more formal court scenes.
The director has been gifted with a cast that is nigh unto perfection. As Vitellia, Laura Wild seems well on her way to becoming the Mozart soprano of choice. Her creamy, evenly produced tone had outstanding presence in every register and she colored it beautifully to reflect her changing moods, starting out teasing and urging, and ending up repentant and confessorial. Ms. Wild is also highly adept at executing the florid writing and ornamentations, suggesting a woodwind-like quality that illuminated every extended melisma. Her dramatic gifts equal her splendid instrument, most especially her deft, subtle comic timing.
The title role can often be eclipsed by the musical machinations swirling around him, but not so here. RenÈ Barbera returned to OTSL, having scored early career successes here in comic roles in The Daughter of the Regiment and The Elixir of Love. Happily, Mr. Barbera found just as congenial a fit with the clement, benevolent emperor, his gleaming tenor ringing out with alluring, stylish aplomb. His is one of the most easily produced, engagingly warm male voices currently before the public, and his ingratiating charisma makes his every performance a joy. 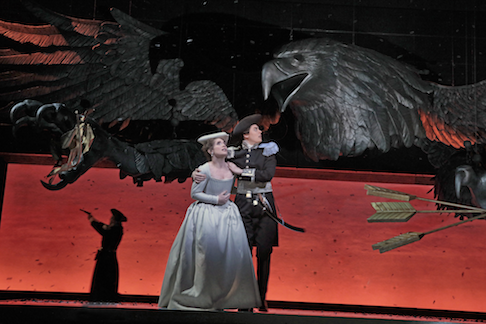 Monica Dewey and Emily D’Angelo
Whereas many practitioners of this role limit themselves to projecting the high-handed nobility of the emperor, RenÈ also incorporates all of the conflicted humanity, the deep hurt of his betrayal, and a convincing personal debate of whether or not to execute his beloved friend. You simply won’t see a more persuasive, well-rounded performance of the titular hero than that by RenÈ Barbera.
The two trouser roles were uncommonly well cast. Sesto has much of the opera’s very best material, and Cecelia Hall was more than up to the task. Her pliant, plangent mezzo created a convincing case for a lovesick, gullible youth, blind to the fast that he is being manipulated not only to betray his best friend, but also to commit a heinous crime. Ms. Hall made Parto, parto into a finely detailed musical journey as she mused and debated her inevitable course of action.
Emily d’Angelo was a potent match with her assured traversal of Annio. Her vibrant, focused tone was flexible and expressive, but also had a nice hint of metal in it that convinced us Annio was a headstrong foil for Sesto. Ms. D’Angelo’s demonstrative reading of her dramatically florid aria won one of the show’s biggest ovations. Icing on the cake: Both ladies-as-boys were lanky and trim, and were utterly convincing as two juvenile men. 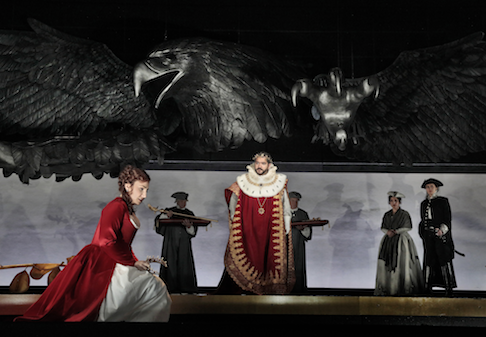 (L to R) Laura Wilde, RenÈ Barbera, Monica Dewey, and Emily D’Angelo
Rounding out the soloists, Monica Dewey was a jewel of a Servilia. Ms. Dewey doesn’t have as much stage time, but her gleaming, poised soprano and delightful stage manner immeasurably enhanced every scene she was in. As Publio, Matthew Stump’s solid bass-baritone and imposing stature provided a welcome balance.
Leslie Travers has provided a handsome set design that suggests ancient Rome, counter-balanced with a luxurious costume design that is more rooted in the time of the opera’s composition. The rather severe formal attire for the chorus and most principals was rather severe, with black and white waistcoats, capes and tri-corn hats for the men (of both sexes) and chorus, and formal gowns for Servilia. Titus and Vitellia were afforded luxurious, red raiment, although Titus’ costumes straddled both color palettes.
The environment includes a huge rectangular platform, subtly painted with a Roman street map, presided over by an immense suspended eagle sculpture suggestive of the Roman SPQR standard, with olive branch and arrows in its respective talons. This eagle de-constructs remarkably as the city is consumed by fire, and crumbles to the floor in four separate pieces as black “ash” confetti falls from the flies. Adding to the dramatic effect was Christopher Akerlind’s masterful lighting design.
Last but most certainly not least, this performance of Titus marked Stephen Lord’s last appearance on the podium as longtime Music Director. Maestro Lord has given us a lot to be grateful for over his tenure, but none more so that this lovingly rendered, stylistically correct, and dramatically propulsive reading of a Mozartean gem. His rapport with the singers and instrumentalists alike was remarkable and his inspired leadership was of the highest order. Bravo, Maestro, e buona fortuna!
James Sohre