Piper’s intricate set fuses the antique with the modern and embraces
Maeterlinck’s allegory with the meticulousness of a pre-Raphaelite painter.
The designer captures the realism of Maeterlinck’s natural world and
decadent decay as well as the symbolic blindness of his text. The result is
a timeless world of fairy-tale and scenic enchantment, allied with a
tangible emotional drama.

Questions are posed from the start, when MÈlisande, a princess bride of
Arthurian lore, trails the ash-grey, twenty-five-foot train of her white
gown as she glides in rapture towards a stagnant pool. Like her tumbling
knee-length hair, the train possesses an erotic energy which immediately
lures the leather-clad crossbow-clutching hunter, Golaud, as he espies her
crown fall into the dark waters. This Golaud, in search of a wild beast in
the forest surrounding the castle of the kingdom of Allemonde, might have
wandered in from a Brothers Grimm tale. MÈlisande is fearful, almost
hysterical – “Don’t touch me! Or I’ll throw myself in the water!” – but
sensing the strength of her will, Golaud is disconcerted and drawn. “Where
do you belong? Where were you born?” Golaud asks. In these opening moments,
Boyd effectively introduces this sensuous figure into an ambiguous
narrative, establishing the opera’s tragic entwinement of loneliness and
introspection with female beauty and sexual longing. 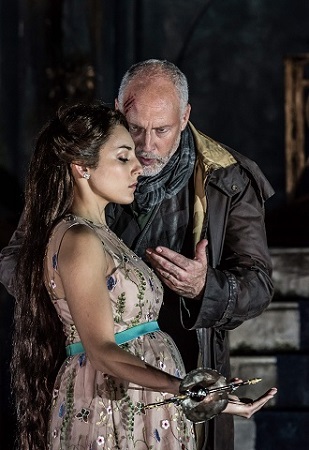 Piper’s set is a huge arching ‘cave’ which enfolds and encloses multiple
terrains: a crumbling Gothic castle with a central curving stairwell rising
to a decaying balcony and medieval turret; the mossy bank beside the Blind
Man’s Well; the beggars’ hovel whose three inhabitants so alarm MÈlisande;
and, dangling aloft, the treacherous ladders that lead to the vaults where
Golaud will test PellÈas’ resolve in the face of the stench of death.

Paradoxically, alongside such gloomy subterranean terrains, the blue
‘ceiling’ of the cave also evokes a world outside – the night sky, the
seashell grotto where MÈlisande professes to have lost her wedding ring –
and glimpses of light through the panels in the decrepit castle doors
foreshadow the final moments of the opera, when MÈlisande will demand that
the doors be opened so that she can watch the magical sunset over the sea,
a symbolic reflection of her own fate.

Malcolm Rippeth’s delicate lighting offers unusual spotlights which do not
always fall where we might expect, highlighting the tarnished gold of
fractured balustrades, the foul vapour mistily swirling above the pool.
Contrasting with the dark corners spotted with shifting shadows there is
some brightness with the stately entrances of the aging, infirm Arkel and
his entourage, the latter confirming the shroud of courtly romance which
envelops the work. 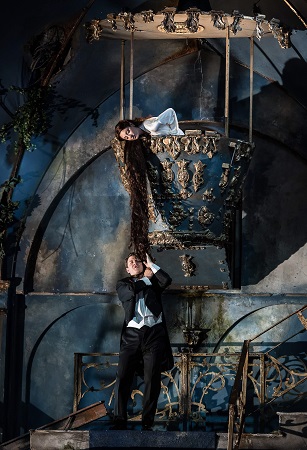 This was a night of tremendous debuts at Garsington for the eponymous pair
of hesitant lovers. Jonathan McGovern has a lovely brightness at the top of
his baritone which captured all of PellÈas’ youthful ardency, aspiration
and doubt. The striking qualities that I admired back in 2011, when
reviewing a recital at the

, have ripened wonderfully and McGovern has developed flexibility alongside
vigour and greater variety of colour. This is not his first essay at the
role and he has built fruitfully on the experience garnered with

in 2015. The baritone’s declaration of love, before he is killed by Golaud,
had a power as penetrating as the uncontrollable ecstasy that PellÈas
experiences beneath the turret from which MÈlisande unfurls her hair. While
the French text was not always perfectly enunciated, McGovern used the
fragmented phrases to reveal – for example, in the scene where he waits of
MÈlisande to arrive so that they might flee – all of PellÈas’
contradictions and delusions. Given that the role falls too low for many
tenors and often taxes baritones at the top this could become a signature
role for McGovern.

American soprano Andrea Carroll only recently completed two years as a
member of the Houston Grand Opera Studio, but she has now been snapped up
by the Vienna State Opera whose ensemble she has joined, and one can see
why. Carroll has a vibrant, gleaming soprano which is particularly rich in
the lower register. She articulated Debussy’s melodic fragments with utter
naturalness, allying crystalline purity with vocal strength; moreover, she
shaped the phrases superbly, guided by the rise and fall of Maeterlinck’s
childlike French prose. Carroll’s vocal and physical beauty gave
MÈlisande a presence which was all-pervading. Joseph Kerman may have found
MÈlisande ‘exasperating … a mysterious, beautiful young creature who
suffers quietly, asks nothing, and never acts’, but while there was no
doubting this Melisande’s suffering – the Lady of Shalott’s lament, ‘I am half-sick of shadows’,
never seemed more pertinent – Carroll conveyed not only her timidity but
also her impulsiveness and her playful coquetry. Her mystery was
duplicitous but there were also striking moments of truthfulness: as she
sang her unaccompanied song, while combing her hair at the turret window,
MÈlisande seemed to step out of time, detaching herself from the dark drama
which unfolded around her. 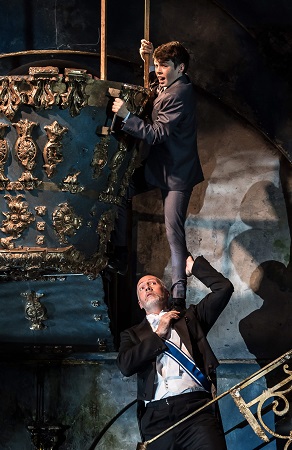 Paul Gay was vocally less secure, finding the upper lying lines difficult
to control at times, but he conveyed all of Golaud’s contradictory,
self-torturing qualities: his sullen moroseness, his immature violence, his
agonised love, his tenderness for his son Yniold. In the scene in which he
tries, in desperation, to force the boy – who is on the cusp of
understanding – prematurely into the deceit and betrayal of the adult world
was intensely moving. Faced with the disintegration of his world, at his
own hands, Golaud’s passion breaks him, and Gay’s delivery of the unstable
phrases with their rapid accelerations and jerking rhythms was tortured and
tragic.

William Davies’ Yniold was a more significant presence in the drama than is
often the case, as he played innocently with his golden ball which, though
it hung like a moon-lantern, offered the protagonists no illumination.
Inevitably the treble’s words did not always come across, but the purity of
tone was a breath of freshness and serenity within the prevailing murky
confusion and growing darkness.

Scottish bass Brian Bannatyne-Scott captured the fading health and status
of King Arkel while retaining his nobility, but did not quite convey the
poignancy of the role. Susan Bickley was a perfectly dignified consort in
regal purple, as his wife GeneviËve, although her account of the happier
past might have had more sense of nostalgic regret for what has been lost.
Dingle Yandell as the Doctor and Joseph Padfield as the Shepherd completed
the fine cast. 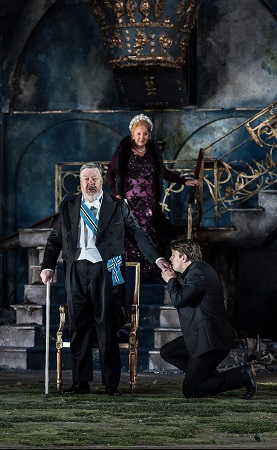 Garsington have just begun a five-year collaboration with the Philharmonia
Orchestra and this was a fortuitous opera with which to open that
partnership, for the players are fresh from their Aix-en-Provence
performances of the work last summer. Under Jac van Steen’s baton the
Philharmonic created exquisite soundscapes in the orchestral interludes and
punctuated the vocal lines adroitly. Van Steen went for a less-is-more
approach, and it worked well; he refrained from overt emotionalism and let
the score speak, and there was a keen sense of unity and consistency
between instrumental and vocal lines.

The details of Debussy’s music-painting were gorgeously crafted: the
throbbing oboe that accompanies the dejected Golaud in the forest; the
fateful chiming of the clarinet when PellÈas presses MÈlisande to tell
Golaud the truth about her lost ring, whose fall into the unreachable
depths of the well is conjured by slithering harp glissandi; the tense,
short crescendos for the lower strings, bassoon and timpani which depict
the closing of the castle gates.

The pervasive secrecy of Debussy’s opera was preserved in Bond’s hands but
he also suggested that the mysteries are more contradictory than we might
at first imagine, the desires both more aimless and more complex. Boulez
remarked that, ‘The real difficulty in interpreting PellÈas is to avoid both pointlessly heroic gestures and rhetorical
attitudes on the one hand and timidity and “safe” understatement on the
other.’ In this magical, troubling production, Boyd and Piper manage both
to tell the (fairy-)tale and protect its intangibility.