Mitchell does away with the Czech village and its mill, and thus there is
no sense of the external milieu – the living community whose disapproval
and denunciation the Kostelni?ka so fears – to match the undeniable local
colour in the score. More importantly, the religious oppression which
stifles the protagonists’ lives is reduced to a token piece of iconography
on a far wall. The result is that there it is not made clear how the
actions and decisions, so often tragic, of the protagonists are inescapably
driven by the context and community. In fact, the only hint of communal
approbation comes when the Mayor’s wife (Hanna-Lisa Kirchen) dismisses Jen?fa’s understated, grey wedding-dress as
unsuitably dour and inappropriate.

However, the confining walls of Mortimer’s austere 1930s kitchen certainly
evoke a fitting claustrophobia, and the slanting ceiling seems
further to crush down the inhabitants, much like the Kostelni?ka’s rigid
authority. It has to be noted, though, that the lack of space inhibits the
choreography of the ensemble scenes, such as äteva’s blustering arrival in
Act 1 and the wedding celebrations in the final act. Act 2 tightens the
psychological screw still further: hidden away by the Kostelni?ka, the new
mother is condemned to a back room, a small black box, and the lack of
decorative adornment focuses our attention on the emotional torment that
afflicts all.

. Since then she her rise has been steady and sure; she was an excellent
Liza in

in 2016, and during the same summer performed Tatyana in

. One of my colleagues noted Romaniw’s ‘wonderful lyrical dramatic voice’
and the ‘real sense of vibrant passion’ that she brought to the latter role
– ‘you constantly felt Tatyana’s presence, whether singing or not, without
ever pulling focus’ – comments that would not be out of place here. There
was astonishing warmth in Romaniw’s portrayal of the hesitant peasant girl
and a true sense of feeling – the fullness of Jen?fa’s desires and hopes,
the veracity of her fears and doubts. In the first Act, the tone
occasionally had a slightly harsh edge as she sang through the Czech text,
but as she relaxed so the sound enriched. Jen?fa’s tenderness for her
child, and the essential goodness conveyed through her Act 2 prayer, made
her visible shock when learning of her son’s death even more intolerably
tragic: ‘So he died’, she says, simply, when the Kostelni?ka bluntly
informs her that she has lost her son. And, her terrible bereavement, at
first quietly accepted, resurges with terrifying force when the dead body
of the child is discovered under the ice and she recognises the tiny red
cap that she knitted for him. Never has such a small motif borne an
emotional weight of greater poignancy. 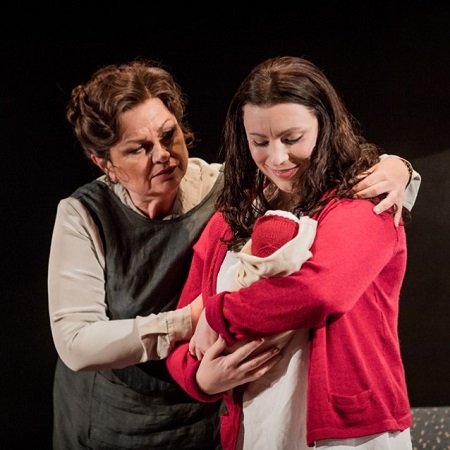 Susan Bullock is making her role debut as the Kostelni?ka, but it’s clear
that she has a piercing appreciation of her character’s essential
qualities, and how to convey them through both voice and body. Bullock is
utterly convincing in communicating the sextoness’s unbending moral will,
but she shows too how her own life is just as tragically constricted as the
lives of those she dominates. Her love for her step-daughter is never in
doubt, and her sense of damnation is palpable as she begs for Jen?fa’s
forgiveness in the final Act.

In Act II she used incisive vocal inflections to take us deep into the
Kostelni?ka’s psyche, as she formulated the words she would use to confront
äteva with his moral fecklessness. And, there was a terrible irony as she
envisaged the accusations that the villagers would fling at her and Jen?fa
should they discover the existence of the illegitimate child, her
imaginings foreshadowing the denunciation and disgrace of the final act.

The theatre has an excellent acoustic and there were a few occasions when
Nicky Spence, a brazenly irresponsible äteva, and Peter Hoare, a dark and
tense Laca, might have held back just a little. But, the soaring strength
of their vocal lines conveyed enormous passion. Spence’s slightly warmer
expansiveness matched the carefree profligacy of the drunken businessman,
while Hoare’s intense focus imbued the veristic arioso with a blend of
bitterness and love which literally, as he twisted his hands and his body
shrank inwards, seemed to wrack his frame, as if he was being eaten from
within by his jealousy. The utter credibility of their relationship and
conflict is perhaps not surprising given that the pair are building upon
their superb performances in David Alden’s production of the opera at ENO
last summer.

The smaller roles were no less accomplished. Jihoon Kim was a sympathetic
Mayor, Anne Marie Owens delivered Grandmother Burya’s
exhortations with style, and Harry Thatcher sang with tremendous directness
and agility as the mill foreman, St·rek. Eleanor Garside’s exuberant Jana –
one of the village girls whom Jen?fa teaches to read, hoping that they may
attain a better life – brought a welcome brightness and liveliness into the
bleakness. Heather Ireson (Karolka), Alexandra Lowe (Barena), Amy
Lyddon (Pastuchyna) and Jessica Robinson (Tetka) completed the fine cast
and joined together to sing a beautifully sincere wedding song in the final
Act.

William Lacey made sure that the BBC Concert Orchestra painted a colourful,
sometimes biting, musical soundscape and if occasionally one might have
wished for a little more Slavic warmth and fire this was more than made up
for by the range of timbre and ceaseless energy of the playing.

Looking at the photograph in the season programme book of the state of the
building site with just 83 days to go before curtain-up, it seemed
incredible that we were sitting in a theatre at all, let alone enjoying
such a vivid and heart-tugging performance.

There was just one ‘wrong note’: the ending. In the 1970s, one reviewer of
the opera, Lindsay Browne remarked that the ending brought to mind the work
of Thomas Hardy or the King Lear-Cordelia reconciliation scene, ‘for the
kind of aching swell of generosity which shines forth from J’s resolution
of many sorrows (Australian Sun-Herald 28 July 1974), and this
doesn’t seem an inappropriate account of the experience of the final
apotheosis of the opera when Laca and Jen?fa are finally reconciled.

Mitchell adds a closing scene of her own: an angelic young boy – the dead
baby? – stands amid a garden of flowers and waves ambiguously (at whom?).
This is at odds with hard-hitting realism of the rest of Mitchell’s
production, and with the rejection of such mysticism by both the composer
and the writer, Gabriel Preissov·, on whose play (JejÌ pastorky?a; Her Foster-daughter) the libretto is based.
It’s a pity, too, since this Jen?fa presents some powerfully
penetrating psychological portraits.