With its feeble libretto by an uninspired Colette, the work survives
entirely due to Ravel’s extraordinary score, which creates tension and
drama through almost purely musical means. I suspect that a full
“realization” of the mise-en-scène specified in the
printed score is almost certain to detract from the work’s power. It
certainly did in my former encounters with the piece.

The SSO’s presentation employed some projections on vestigial ropelike
screens and a scrim, but the best thing about them was their unobtrusiveness.
Every ounce of our attention was focused on the performers. 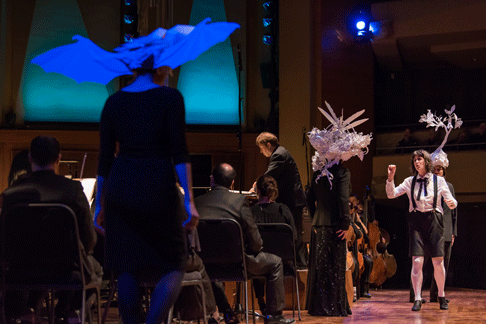 The singers in plain concert gear move with unaffected dignity among
the instrumentalists in dazzlingly elaborate ivory papier-maché
head-dresses, wittily suggesting their personae but leaving most of the
characterization to the orchestra: the individual players  were fleetingly
but vividly illuminated by the spill from the singers’ follow-spots: it
was enough to render them active presences Everyone of stage, from conductor to
boys’ chorus, became equal participants in a common enterprise,
supporting Ravel’s unexampled marvel of a score.

Conductor Ludovic Morlot came to Seattle in 2011 from Belgium’s la
Monnaie; he departs again after next season, having fulfilled his mandate: to
bring a capable but troubled ensemble to a new level of polish and
professionalism, and to open the audience to a new kind of participation in the
living orchestra repertory. 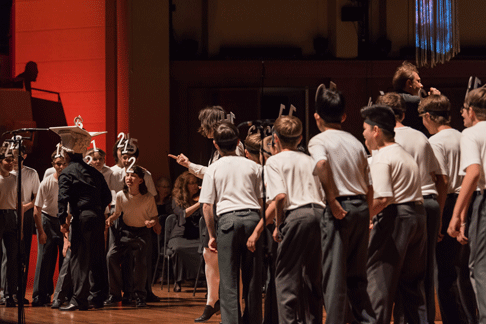 He is a fine all-round conductor; he is exceptional in his sensitivity for
and dedication to 20th and 21st century French music. He
will be sorely missed on the podium, but is too gifted to spend the bulk of his
career with a provincial band, no matter how virtuosic. We have spent far too
many years in Seattle with conductors essentially “retired in
place,” to the severe detriment of imaginative music-making and
orchestral morale.