Based on Goethe’s German-Romantic tale “The Sorrows of Young
Werther,” and sung in French with English surtitles, the nearly
three-hour production’s skeletal plot of boy meets girl; boy loses girl;
boy dies is opera at its compact best. Preferring not to gild the lily with
convoluted (albeit operatic) twists and turns, it delves more deeply into the
hearts and minds of its ill-fated characters, underscored by Massenet’s
stunningly gorgeous music brought to life by Tyrone Paterson leading the
Winnipeg Symphony Orchestra.

Last appearing onstage as Tonio in MO’s 2012 production of
Donizetti’s “The Daughter of the Regiment,”
Edmonton-born tenor John Tessier in the title role may quite rightfully may be
considered a Canadian treasure. He spun every lyrical phrase like fine gold,
first heard during his opening aria “O Nature, pleine de
grâce,” performed with ease and capped by ringing high notes. His
showstopper: “Lorsque l’enfant revient
d’un voyage,” and later, a goose-bump inducing
“Pourquoi me reveiller” elicited well-deserved,
spontaneous applause with cries of bravo. 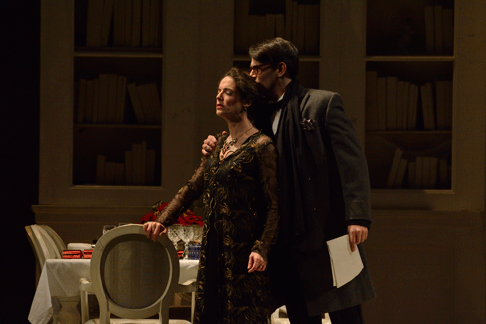 Winnipeg-based soprano Lara Secord-Haid’s sparkling portrayal of
Charlotte’s younger sister Sophie captured the impetuous optimism of
youth, as she skipped and flitted about the stage with her effervescent
colouratura on full display during “Du gai soleil, plein de
flame.” But she also imbued her youthful character with subtle
nuance, creating a fascinating sub-text for her own tragic tale of love and
loss after Werther’s departure leaves her sobbing uncontrollably during
Act II. 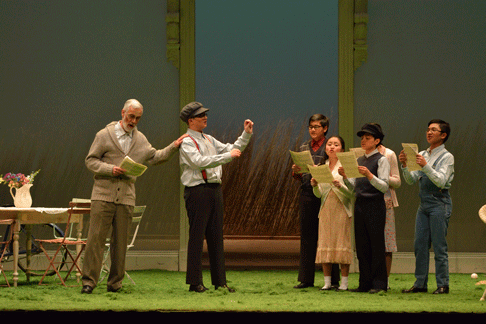 Having said all this, the production itself proved uneven. Hodges opted for
an overall slow-burn approach to the lead characters’ respective
emotional trajectories, allowing Werther’s love for Charlotte to first
smolder like ashes during Act I and II, before finally erupting into flames in
Act III. When the poet arrived to escort Charlotte to the dance in Act I, their
first encounter came across as more polite than passionate. His understated
reaction to hearing of Charlotte’s impending nuptials also did not
clearly read, despite his later, angst-ridden “Un autre est son
époux!”

It’s also difficult establishing a physical/emotional connection when
Charlotte herself is forbidden fruit, so duty-bound she refuses to even kiss
Werther until he is mortally wounded by his own hand. This created a strangely
distancing effect that a few embraces – no matter how furtive –
might have helped mitigate.

Still, other artistic choices were effective, including an added prologue
showing the death of Charlotte’s mother. This established the
opera’s overall themes, while also providing Charlotte’s motivation
for remaining stonily resistant to Werther’s ardent declarations of
love.

The 1920s-styled set on loan from Opéra de Montréal, with the
production itself originally created by Opera Australia appeared striking in
its simplicity, while also engendering fresh appeal. Nevertheless, sightlines
at times became challenging, and the “big box” style of set
visually dwarfed the opera’s sweeping themes of transcendent love,
despite its waving grasses just beyond the formal exits that beckoned of wild
nature and freedom like a siren song.

Effective lighting design by Bill Williams included a luminous moon under
which Charlotte and Werther fall in love during Act I, and relatively abrupt
fades during Werther’s key arias, which nevertheless focused attention on
the doomed poet as he hurtled toward his own death spiral for love.