Derived from Euripides and Ovid, Semele relates the Greek myth of
the eponymous princess, daughter of King Cadmus of Thebes, who prefers
Jupiter – Jove, in his mortal form – to her betrothed, Athamas, Prince of
Boethia, who is in turn loved by Semele’s sister, Ino. Semele craves more
than simply a dalliance with a god, however; she wants immortality. Her
judgement clouded by ambition, she is tricked by Jove’s vengeful wife Juno
into demanding that Jupiter make love to her in his immortal form, thereby
sealing her own destruction.

When Handel’s and William Congreve’s ‘secular oratorio’ was first seen
1744, the composer’s regular librettist Charles Jenners condemned it as ‘a
bawdy opera’, and the contemporary London public were disconcerted by the
risquÈ insinuations of the text – English, not the expected Italian – and
frequent dramatic incursions by the chorus which broke with the da capo conventions of opera seria.

But, ever the man of the theatre, the politically astute Handel knew what
he was doing. Congreve’s text had been written thirty years earlier for
John Eccles, but the work had been withdrawn, throwing as it did rather too
acute a light national anxiety over the succession in the aftermath of the
Glorious Revolution of 1688. By the 1740s, the political context had
changed. After the death of his wife, King George II had set up one of his
many mistress, Amalie von Wallmoden, with a title and large income, and the
public feared that she might become Queen. Moreover, the nation was still
troubled by the threat of a Jacobite Revolution. This latter danger was
embodied by the dissolute figure of Charles Edward Stuart – the young
pretender, Bonnie Prince Charlie – whose religious leniency and sexual
licentiousness were lamented in equal measure by the dour Hanoverians, who
surely found anti-Jacobite resonances in Handel’s portrayal of Jupiter.

Handel’s tale of human ambition and marital infidelity among the immortals
is thus a heady mix of sex and power which, at the time, shone a satirical
spotlight on both national and theatrical politics. But, as Miskimmon and
Shaw recognise, it’s a passionate brew that is no less relevant today, as
the soap operas that play out on both the television screen and the
political stage confirm. Handel stirs sensuousness into the satire and, if
she does not quite always control the balance between triviality and
tragedy, then Miskimmon offers both playfulness and pathos, potently
illuminating the perils of jealousy, self-love and ‘vaulting ambition’.

Miskimmon presents a busy mime during the overture as high-society guests
in fashionable modern dress gather for the wedding of Semele (Heidi Stober)
and Athamas (Christoper Ainslie) in a plush civil hall – royal-blue
curtains, an outsize red heart, golden chandeliers and towering cake –
while Llio Evans’ Iris, the messenger of the gods (part stage-manager, part
Shakespeare’s Ariel), runs a tech check and takes position atop the heart
to watch the nuptials unfold. But, as the edgy rhythms and nervous motivic
interplay strike up in the pit, so the jealous Juno – tired out by
pregnancy and her husband’s infidelity, pushing a double-buggy and
surrounded by her pink-clad brood – appears, to remind us that drastic
divine intervention is imminent.

That’s when the fun starts. As Semele is dragged to the altar by Cadmus
(David Soar) and urged by the chorus to bring peace and luck to the nation
through this auspicious wedlock, Jupiter (Robert Murray) saunters around
the anxious guests, drawing nonchalantly on a cigarette. When Semele calls
upon the deity for guidance, he short-circuits the chandeliers, shatters
the heart of roses and blows up the wedding cake. The drapes are drawn back
to reveal the planetary paradise whence Semele is whisked by a crew of
celestial flight attendants, their berets capped with golden wings.
Ensconced in Jupiter’s lunar love-nest, she is stripped of her earthly
wedding frock and dressed in the silvery beams of stars and moons – or,
more prosaically in lamÈ cloaks and cat-suits. 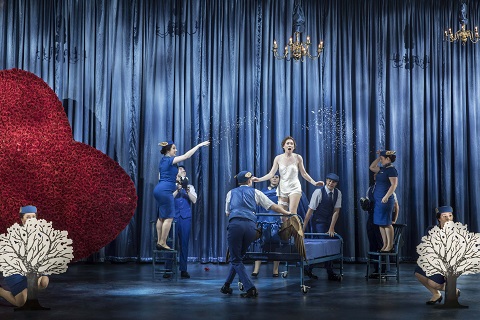 Shaw makes the most of the wide Garsington stage and presents us with a
night-blue observatory panorama of pendulous orbs amid zodiacal light and
nebulae. The splintered chandeliers are replaced by gleaming globes. It’s a
hypnotically beautiful vista, and as the real night descends around the
Garsington pavilion one can almost hear the cosmic harmony. When the globes
lower, to nestle around the sleeping Semele, she looks like Tytania amid
her faery bower of magic lanterns.

However, despite the air of enchantment there’s mischief afoot, in the form
of the wrathful Juno (Christine Rice) who, with childbirth imminent,
impatiently – and hilariously – grabs the gas and air from her inattentive
nurse, David Soar’s drowsy Somnus. The latter also proves reluctant to join
in the plan to destroy Semele, until the scheming Juno bewitches his duvet
into an erotic bedpartner and promises him the love of the nymph Pasithea.
Disguised as Ino, Juno convinces Semele to demand that Jupiter comes to her
in his immortal form. As Stober’s Semele poses and preens –
‘Myself I shall adore,/ If I persist in gazing./ No object sure before/ Was
ever half so pleasing’ – framed within a wonky light-bulb rimmed heart, the
message to selfie-snappers and narcissistic Instagrammers is clear. 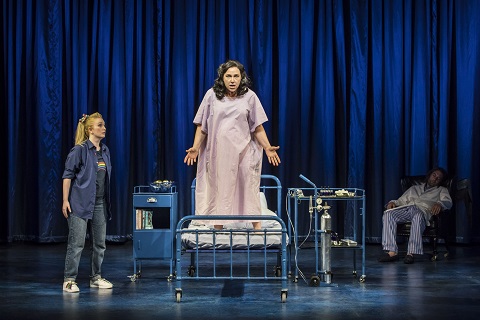 Bewitched by Somnus, Jupiter is unable to deny her request and removes his
mortal form’s leather gloves; when the inevitable thunderbolt flashes,
Semele becomes a luminous astronomical body. But, despite her overweening
egoism, the image created by Shaw and lighting designer Mark Jonathan of
her progress towards the heavens, reflected in a huge mirror-orb, creates
genuine pathos. She climbs into her cosmic coffin and the Chorus returns,
the wedding guests now mourners at Semele’s funeral, their candles of
remembrance placed in a stellar formation of flames over which her ashes –
like interstellar dust – are scattered.

Back on earth, happiness is being restored. Hermes has come to Ino in a
vision, revealing her sister’s fate and Jupiter’s wish that Ino marry
Athamas. He seems happy to oblige. Apollo appears to announce that a new
god will rise from Semele’s ashes: cue the arrival of a golden cherub,
Bacchus – in a neat touch, played by Stober’s cute young son – who is
snatched up by the be-winged, gold-suited Jupiter, to the fury and despair
of Juno who departs, presumably to plot her next act of retaliation.

It is the choruses that betray the work’s ‘oratorio’ origins and
Miskimmon’s direction of the twenty-eight-voiced Garsington Opera Chorus is
superb: precise, detailed, imaginative, credible. The choreography and
timing is perfect: even Juno’s children – a veritable clan of van Trapps –
collect up the shining orbs with flawless exactness. And, the Chorus are in
tremendous voice. They almost steal the show.

Not quite, though. For me, that accolade goes to Christine Rice who,
piercing Juno’s nails into Iris’s palm as her coloratura roulades attest to
her suffering, uses every inch of her wide range to convey the goddess’s
fury. Hearing her low notes burn one could not doubt her scorching spite
and resentment. Rice’s Juno is both terrifying and comic, and her flashes
of vocal fire are the equal of her husband’s lightning strikes.

In the title role, American soprano Heidi Stober captures of all of
Semele’s headstrong ambition and solipsism, but the sensuousness of her
phrasing and the amber glow which swathes her soprano from bottom to top
makes the wilful princess an absolutely mesmerising minx. She has the
breath control and agility to tackle the virtuoso arias with confidence,
but each one is individually characterised. Her achievement is all the more
noteworthy given that Stober twisted her knee during Act 2; one would never
have known, so physically and vocally lively and engaged was she. 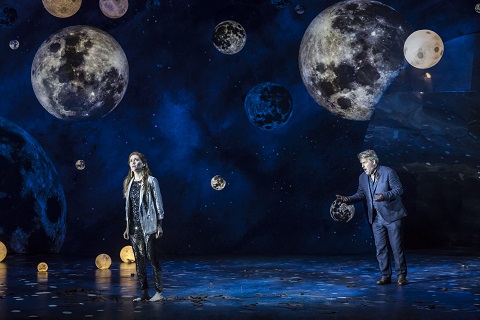 Handel’s characterisation of Jupiter is unusual, for there is little
imperiousness and majesty. Robert Murray’s easeful, sweet tender was
perfect for the opera’s ‘greatest hit’, ‘Where’er you walk, cool gales
shall fan the glades’ – an attempt to beguile Semele to distract her from
her demands for immortality. Murray moved from the amusingly futile hope
that his ‘softest thunder’ and ‘most melting bolt’ might do least harm to
his beloved, to a love song of great tenderness. As the petals fell on his
prone darling, poetic artifice and sincere devotion were fused. In
contrast, ‘Ah! take heed’ rang with thrillingly with dread.

Doubling up as the authoritative Cadmus and slapstick Somnus, David Soar
showed his dramatic range. His bass had terrific power and resonance; and,
like all the cast and chorus, his diction was superb – for once, surtitles
were genuinely redundant.

Ino’s Act 1 aria, in which she pleads with the rejected Athamas to turn his
sad eyes in her direction, was expressively sung by mezzo soprano Jurgita
Adamonyt?, and beautifully accompanied by Ashok Gupta (organ) and Jane
Fenton (cello). During the aria, the Chorus removed the chairs set out for
the aborted nuptials and, typically of the care and precision executed
throughout, for once action in the background did not distract at all from
the expressive focus established by Adamonyt?.

I was not entirely convinced by the relationship between Ino and
Christopher Ainslie’s Athamus, but perhaps one is not meant to be. Ainslie
has a fairly soft-grained countertenor, and Athamas’ first aria of passion,
‘Hymen, haste, thy torch prepare’ did not project with the requisite
weight, though it was technically accomplished and stylishly phrased.

‘Endless pleasure, endless love’, Semele enjoys in her celestial boudoir.
This witty, winning production allows us to share in her delight.