This production was the last production performed at Garsington Manor, in
2010, before the company’s move to Wormsley; and,

recently, Garsington’s Artistic Director, Dougie Boyd – who conducted on
that occasion and under whose baton the production returns to the
Garsington stage – told me that the wider stage and improved technical
facilities had led to changes to design and staging which encouraged
Garsington to describe this as a ‘recreation’ rather than a revival. I had
not seen Cox’s vision in its previous manifestation, but I found the
nestled layers of Robert Perdziola’s design to be a brilliant conceit.

The shabby garret room bestowed by Count Almaviva on the soon-to-be wed
Figaro and Susanna, settles into the angled corner of the Countess’s
soft-silk boudoir, which itself sits snug in the walls of the Count’s
portrait-lined study. Surrounding all is the garden: the pines, topiary
hedges, shrubbery and terraces. Beyond that, of course, are the gardens of
Wormsley, and Cox made good use of the location: not only did the one-day
time scale of Figaro perfectly mirror the real-time progression to
dusk and darkness, but when Cherubino leapt from the Countess’s window to
evade the Count’s wrath, we witnessed his somersault over the balcony and subsequent helter-skelter dash through the Garsington grounds,
towards the lake, with disgruntled, inebriate gardener, Antonio, in hot
pursuit.

And, so, the trajectory of Shakespeare’s Othello – which moves
from the streets of Venice to distant Cyprus, to ever more enclosed
settings culminating in the private chamber where Desdemona meets her death
at the hands of her jealous, duped husband – is reversed in Figaro
, which progresses from inner rooms, first private then of state, to
external nooks and crannies of intrigue and deception. And, this is
emphasised by Cox’s staging and Perdziola’s set, in which, paradoxically,
the rings of the onion are peeled away, thus taking us ever further from
the domestic interior.

The individual spaces were each well utilised, too. Though Figaro’s attic
bedchamber was somewhat cramped, crowded with upturned boxes and
bed-frames, a step ladder at the rear enabled supernumeraries and
principals alike to climb up, creating an impression of space and an
opportunity to project. The vista widened for the Countess’s boudoir, with
the towering window and terrace beyond further extending the stage-scope
stage-left, and the swivelling periaktoi stage-right exposing the
Countess’s closet for our delectation when first Cherubino and then Susanna
were therein concealed. Into the Count’s study trouped Marcellina, Bartolo
and various notaries and maid-servants during Act 3, bringing the outside
world to the Count’s private domain. And, in Act 4, the expanse of the
Garsington stage created a credible garden milieu, with all its nooks,
crannies and caves which facilitate the domestic intrigue.

The production also showcased Garsington’s values and ethos, with several
significant roles filled by returnees and those who had planted the roots
of their careers in Garsington’s figurative musical gardens. This was
baritone Joshua Bloom’s fourth season at Garsington; he made his debut here
in La Cenerentola in 2009, and sang Leporello in the 2012 Don Giovanni. Here, he was a wonderfully controlled and
methodically crafted Figaro, his huge vocal capacity never once
overwhelming his musical intellect. When challenging the Count’s
proprietorial assumptions, Bloom’s voice was indignantly resonant; but
when, in Act 4, Figaro believed himself duped and betrayed, Figaro was
endowed with a credible vulnerability, which tempered Bloom’s sturdy
baritone. Bloom has presence, panache and vocal power: a winning triplet.

Soprano Jennifer France is returning to Garsington following her role debut
as Marzelline in Fidelio in 2014 (when Bloom was Don Fernandez)
for which she was awarded the prestigious Leonard Ingrams Foundation Award
for outstanding young artists. ‘Outstanding’ is certainly an adjective I
would use to describe her Susanna on this occasion. This Susanna is a
feisty lass – verbally and physically – not beholden or subordinate to
husband, mistress or master; but, her fierce will and self-belief never
once temper the sweetness of her vocal utterances. France’s soprano is
lithe, clean and her stamina unflagging; she was as bright and brisk in the
final Act as in the first. She is also a consummate actress, adaptable,
relaxed and vivacious. A star in the making. 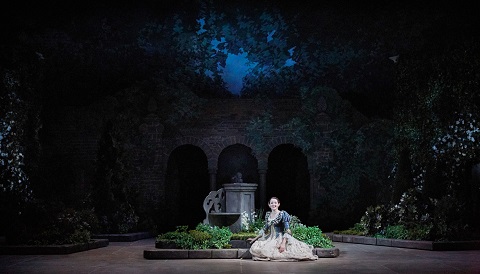 Some of the cast were new to Garsington. And, Duncan Rock’s Count was an
interesting proposition. Cox and Rock dispense with vulgar aristocratic
assumption, and with buffoonery, and present a Count who is thoughtful and,
at times, acute and subtle, but whose duping is thus doubly effective and
prompts sympathy alongside gleeful comeuppance. There was the usual
incredulity and confusion, but also a genuine wish to understand how it has
come about his servants are running rings around him, and a, perhaps,
justified disgruntlement at his dependents’ independent willfulness. Rock
balanced aristocratic presumption with human susceptibility.

I wasn’t entirely convinced by Canadian soprano Kirsten MacKinnon’s
Countess. She certainly looked the part – beautiful, stately – and
MacKinnon has a bristling richness at the top. But, ‘Porgi amor’ was
somewhat hesitant, and she struggled to control and shape her vibrato;
while first Act nerves might have been understandable, MacKinnon also
seemed to rush through the phrases of ‘Dove sono’ and wandered off-pitch.
There were a few rough edges too; there are places where glitzy dazzle is
no compensation for lack of dulcet sweetness. That said, she made a
positive contribution to the ensembles and her Act 3 duets with Susanna
were a delectable intertwining. 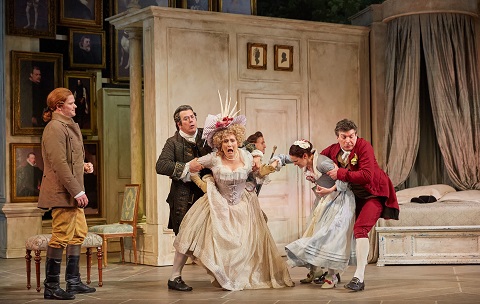 The last time I saw Janis Kelly, at

in 2016 as Berta in Rossini’s Barbiere, she threatened to steal
the show. And, the same was true here: her Marcellina was a cross between
‘Hyacinth Bucket’ and Queen Elizabeth II, but her voice is still fresh and
youthful. The Act 3 revelations of Figaro’s origins were expertly done –
Kelly switched from financial grabbing matriarch to matronly concern in the
twinkling of an eye; and, Kelly’s theatrical experience no doubt was of
enormous help to the younger members of the cast. 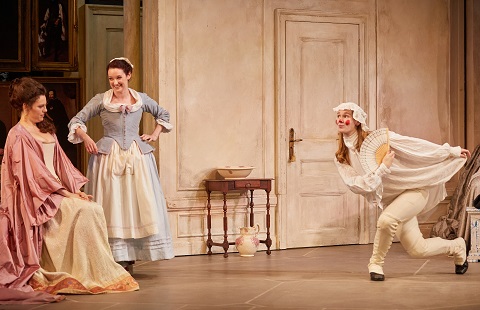 My first thought was that Marta Fontanals-Simmons was too tall for the
adolescent Cherubino, but she proved a master (mistress) of fresh-voiced
enthusiasm and cross-dressing faux-awkwardness. There were strong
performances too from Timothy Robinson as Basilio – ‘What I said about the
page was just a suspicion’ was nasally declaimed with wicked delight – and
Stephen Richardson’s Dr Bartolo. Richardson ran away from the orchestra in
the patter of ‘La vendetta’ but he was a surprisingly sympathetic
character, his yearning for love and reconciliation outweighing that for
revenge. Alison Rose’s Barbarina was a strongly delineated musical
character portrait and Andrew Tipple’s inebriated gardener, Antonio, was
gruff of sentiment but precise and vigorous of tone.

There were a few rough edges at this first-night performance, and though
Dougie Boyd conducted with vivacious alertness, drawing a full range of
emotions from his band, he couldn’t quite keep the Chorus tightly in rein,
and the Act 3 Act ending was a little messy. But, the accelerating
progression through the Act 2 finale was spot on, and I’m sure any minor
teething problems will iron themselves out.

This is a delightful Figaro revival/recreation – what you will –
that will undoubtedly get even better as the run progresses.