After Leipzig’s sensational production last year of Wagner’s early work Die Feen, the only current staging in opera, I returned to this optimistic German city for Gounod’s Cinq Mars, or here renamed Der Rebell des Kˆnigs. While Gounod’s music packs less thrills than his Faust or even RomÈo et Juliette, the vocal and dramatic chemistry in this production certainly did not disappoint and made the trip more than worthwhile.
Gounod based his 1877 Cinq Mars on Alfred de Vigny’s historical novel about Marquis Henri de Cinq Mars’s failed attempt at rebellion against Richelieu, the manipulative Catholic Cardinal advising King Louis XIII. The libretto was written by Paul Poirson and Louis Gallet, who also wrote Massenet’s ThaÔs, and some lesser known works by Bizet and Saint-SaÎns.
Anthony Pilavachi created a traditional tableaux vivants, faithful to most of the directions in the libretto. Markus Meyer’s costume design from that time and painting frame set, a frame within a frame, worked well. The pictures added to the inauthentic portrayal of ourselves as we tread into the social spheres, in this case the King’s court. All the world is still a stage.
To turn this into a true grand opera, Gounod added an impossible romance between Henri and a princess and included a delightful ball scene in the second act, humorously choreographed by Julia Grunwald. The Leipzig Ballet put on an entertaining, pastoral dance scene that offered some levity and witty moments provoking laughter amongst the audience.
As Henri de Cinq Mars and Princess Marie de Gonzague, who for political reasons must wed the Polish King, the stars of the evening Mathias Vidal and Fabienne Conrad led with passionately romantic chemistry an excellent cast. At the end of Act I and Act III, their duets received boisterous applause. In the final act, Vidal, right before Cinq Mars’s death, channelled the glamorous dramatics of Jonas Kaufmann: his singing produced deeply moving emotions to which the audience responded with the loudest bravi. 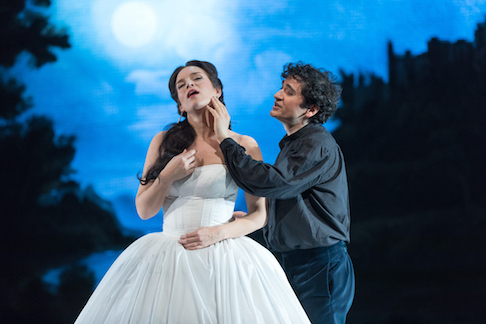 Vidal and Conrad in an impossible romance
As head of Richelieu’s network of spies, Mark Schnaible created Father Joseph with the necessary religious villainy. He conveyed enough sickening contempt to remind me of a corrupted satanic Catholic. Toxic in the worst of ways. At the curtain call, for one moment he almost seem to rouse some boos, Schnaible was that successful at his antagonism.
The supporting roles were all well cast. As the pistol whip Marion Delorme, coloratura Danae Kontora stole each scene. Delorme hosts the party during which the ballet occurred. Not only did she carry her scenes with charm and wit, her voice commanded the stage and almost eclipsed Ms Conrad. Together with Delorme’s mischievous counterpart Ninon de Lenclos (an entertaining Sandra Maxheimer), the two devious ladies dazzled and brought out overtop flamboyance in their coquette scenes in the second act.
Amongst the supporting men, Jonathan Michie as Conseiller de Thou impressed the most. Always caring and forewarning towards his best friend Henri. In Act I, he particularly charmed in his bromance, although some of their funny French shenanigans were lost in translation. Later Michie demonstrated his vulnerability in his protection over Cinq Mars, before his friend’s tragic ending. Jeffery Krueger and SÈbastien Soules, also contributed remarkably as de Montmort and de Fontrailles. 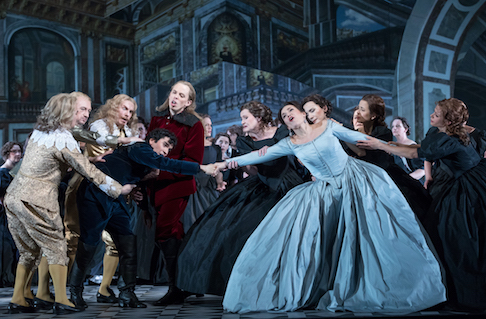 The cast and choir in Cinq Mars
Alessandro Zuppardo prepped the Choir of the Oper Leipzig who provided indispensable energy. They offered great momentum in the beginning as they drew the audience into the story. They also engaged in lovely theatrics on stage in the frivolity at the ball in the Act II. Above all, the German choir authentically conveyed French patriotism in rousing moments.
David Reiland (from OpÈra ThÈ‚tre de Saint-…tienne) conducted the Gewandhaus with much verve, never overshadowing the soloists. His pace created a continuous momentum which he led through each act. I was never bored with this composition by Gounod.
While Cinq Mars didn’t reach the epic grandeur of Leipzig’s early Wagner Die Feen, this production should be seen by any opera aficionado who wants to be treated to Gounod’s excellently executed, unrecognised work. It will be performed several more times in early 2018.
David Pinedo