Despite being in a functioning school hall in south London, with a minimal set, dodgy lighting, and done on the proverbial shoe-string, it still managed to transport us into a languid, sun-soaked Mediterranean.  Added to which Phillipa Thomas is the best Carmen I’ve seen since Maria Ewing in the Peter Hall production at Glyndebourne in the ‘80’s.  While Ewing had a breath-taking stillness about her, Thomas brings an innocence to the role.

In his programme notes the director Ptolemy Christie writes that the original Carmen in Prosper Merimee’s book was ‘vicious, intoxicating, ruthless, double-crossing and dark.  She’s bad news.   In the opera she is also vicious and of course intoxicating but she is also a creature of humour and light.’   Phillipa Thomas came onto the stage with a huge, slightly naughty smile on her face — she was going to enjoy herself, and who can blame her when she’s nailed this role so well, and evidently has a good time singing it (even with an announced but imperceptible cold).   She allows the role to develop, initially a curious pretty alley cat at her first meeting with Don Jose when she throws him the flower — she knows she fancies him and wants to play with him.  She allows her character to unravel and when her smuggling mates go off to the mountains, her happiness at being in love with Don Jose is genuine.  Even in the final act when she’s trying to get past Don Jose, the music is uncertain and although her heart is hardened against him, Carmen mirrors this, at the same time showing that’s she’s moved on.  This Carmen doesn’t shake her booty but celebrates it.  She has no inhibitions on stage, she’s a stage animal and she inhabits her role — one to keep a sharp eye on. 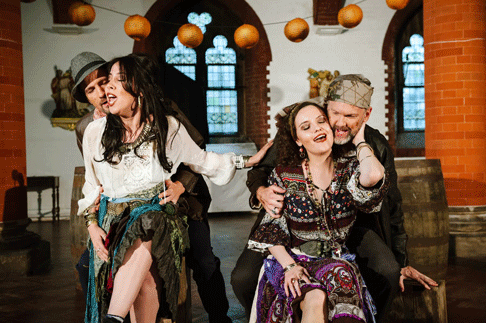 This luxury Carmen casting wouldn’t have worked had it not been for the production around her which used what they didn’t have to their advantage; at the beginning of Act 11, Frasquita and Mercedes gathered round the upright piano in the Lillas Pastia Bar giving a seedy image, and in the mountain scene, the cards were clearly visible when Carmen sees death in them.   Christie also got round the crown scene outside the bullring in Act 4 without a crowd.    He placed the focus solely on Carmen and Escamillo, the extent of their love and put them in gorgeous eye-pleasing costumes.    This in turn made Don Jose’s entrance and the last scene more menacing and powerful.  Christie also injected energy into the production and cast; Carmen as a piece is an onslaught of emotions and this cast didn’t shy away from that — they were believable.  James Hutching’s Don Jose looks like a young boy and plays the role with acute vulnerability –  his Flower Song was real tear jerker.  He coped well vocally although this role is a big sing for him.  Loretta Hopkins looked like a mixture between a NHS nurse and a milkmaid, a good combination for Micaela while David Fletcher was an aptly oily Escamillo, but vocally this isn’t his role.   Credit should go to the rest of the cast for their energetic back-up. 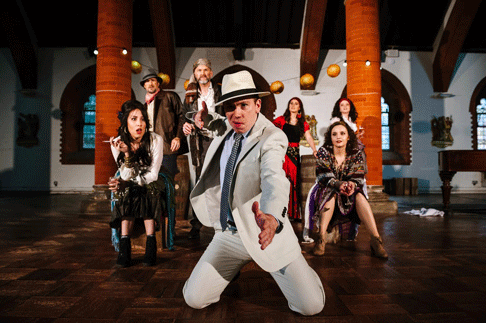 The sight of a little black upright piano for Carmen was daunting but fears were soon aligned.  The music director Jeremy Silver kept the show on course, the tempo never lagged, and legato passagios were emotively spun out.   With the invisible cuts, this was a compulsive and enjoyable show.