There is a host of fine operas out there languishing more or less
unperformed (in some cases, quite unperformed). A few of them might even
qualify as ‘great’. Franz Schreker’s Die Gezeichneten, whatever
its proponents might claim, is certainly not one of those: not even close. Nor,
however, is it a piece that fails to merit the occasional outing. Whether it
merits the torrent of productions seemingly in store is rather less clear. For
what it is worth — and this is partly a matter of taste, or lack thereof
— there is not a single opera by Mozart, Haydn, or Gluck I should not
rather see before sitting through this again. That said, I was immensely
grateful not only for the opportunity afforded by the Bavarian State Opera not
only to see the opera staged, but to see and hear it performed and staged so
well — so much so, indeed, that the whole experience was enjoyable,
absorbing, very much more so, I think, than the intrinsic merits of the opera
might suggest. 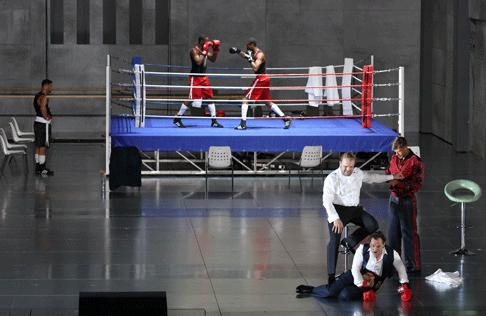 That might sound odd, but it is not really so very odd — at least not
necessarily. A peculiarity, indeed a fascination, to the opera is that almost
every charge one might lay at its door might conceivably meet with the
rejoinder: ‘that is the point’. It depends whose point, really: it
is less often the point if we focus narrowly on ‘intention’, but
why should we? Krzysztof Warlikowski’s production seems to nod to this
thorny question by interpolating, immediately after the interval, before the
third of the three acts, Schreker’s own character sketch of 1921, in
which he presents — even, to an extent, ‘reclaims’, as we
might say — accusations thrown at him and his art. It is, we may be
reasonably sure, intended ironically or, perhaps better, with understandably
vicious sarcasm, having been constructed from criticisms he had received:

I am an Impressionist, Expressionist, Internationalist, Futurist, a musical
purveyor of verismo; Jewish, and rose through the power of Jewishness;
Christian and was ‘made’ by a Catholic clique under the patronage
of a Viennese arch-Catholic countess.

I am a sound artist, sound fantasist, sound magician, sound aesthete, and
have no trace of melody (other than so-called short-breathed empty phrases,
newly known as Melodielein). I am a melodist of the purest blood, as a
harmonist however, anaemic, but perversely in spite of this a full-blooded
musician! I am (unfortunately) an erotomaniac and work balefully upon the
German public (eroticism is obviously my innermost contrivance, despite
Figaro, Don Giovanni, Carmen,
Tannhäuser, Tristan, Walküre,
Salome, Elektra, Rosenkavalier, and so on). …

The rest, in which he continues, to explain that he is not of the true
modernistic ‘left’ (Schoenberg and Debussy), owes something to
Verdi, Puccini, Halévy, Meyerbeer, et al, and so on, may be
read here. (It is
well worth doing so, if you have the German.) It made for a powerful moment, or
rather few moments, in the theatre, not least since Warlikowski has it read by
the tragic, ugly hero-artist (the libretto was originally intended for
Zemlinsky), who thus becomes at least in part an explicit realisation of
Schreker’s plight. The problem, however, remains that, insofar
as we may dissociate criticism of Schreker from anti-Semitism — perhaps
it is impossible historically, but it need not be so now — many of the
criticisms levelled tend actually to be born out; either that or the
comparisons (Figaro, Tristan, etc.!) are rather embarrassing,
doing neither composer nor opera any favours at all. 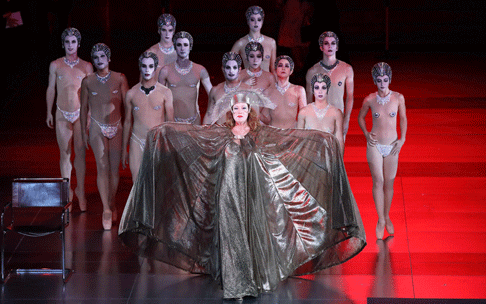 What we have, then, is an evening in the theatre in which that problem is,
if not worked out, at least explored. The slipperiness of artistic creation and
agency is embodied in Alviano Salvago. Is he a good artist or a con artist?
There are many other possibilities; we do not end up necessarily falling short
of Mozart and Wagner because we are not trying. Salvago has created a garden of
delights, an island park of Elysium, which he wishes to give to the people of
Genoa. Is the suspicion of its establishment justified? In part, perhaps. Dark
things clearly go on there. Are they the creator’s doing? Not
intentionally, but they can be readily understood, made out to be, especially
by other, more attractive noblemen who wish to be able to pursue something far
more dastardly, indeed truly shocking — such as to leave our
aesthetic-moralistic sniping at Schreker-Salvago look at best misguided. Do we
really want to be the ones to say ‘yes, I’m sorry, your music is
overblown, verging on the formless, an illustration or at least a piece of
evidence, moreover, that Schoenberg was right: once a certain point of
chromaticism has been reached, there really is nowhere else to go other than
somewhere you would not…’, and so on? Of course we do not,
especially when we know with whom we are allying ourselves, especially when we
know how the crowd may be swayed — either by Salvago or by his opponents.
On the other hand, Goebbels is not the only option: there is Schoenberg too;
there is Moses und Aron, where we can see and hear these antinomies,
or better dialectics, actually treated with the seriousness they deserve.

Give ourselves a third hand, though, or, Blair forbid, a ‘third
way’, and perhaps we may wish to tarry. It is not as bad as Korngold,
say. There is genuine fascination in the harmonic and instrumental colour:
evidence of the most extraordinary ear. Alas, there is such an utter lack of
variety that it all sounds more or less the same. One may like the sound; I
might, for a few minutes. But for three acts? Three acts, that is, intruded
upon only by a strange vulgarity in the third: dramatically effective, to a
certain extent, as a suggestion of crowd dynamics, yet ultimately incongruous
and, more to the point, unconvincing. The lack of ‘traditional’
melodic invention is not the end of the world in itself, but let us not
convince ourselves that this is replaced by the still well nigh incredible
perpetual self-transformation of Erwartung. Nor is the lack of musical
characterisation necessarily fatal, although it is clearly a flaw, for this is
not Fidelio, in which characterisation is simply not the point.
Returns, however magnificent they sound in themselves, diminish all the time,
without ever being replaced by something which, in that old Romantic way, we
might consider to be true inspiration. Contrivance is all very well; who cares,
ultimately, if the result is good. But is it?

Warlikowski proves himself, unsurprisingly, a dab hand at the erotomaniac
side of things. The burlesque dance performed before the angry Schreker-Salvago
is not the half of it, although it is perhaps the most memorable side. He shows
also, quite unsparingly, how evil one side of the accusers is: that is, the
party of Vitelozzo Tamare. Rich, unscrupulous, deceiving, plausible, violent:
it is they who do the real harm, who have kidnapped and abused Ginevra Scotti,
whilst framing the poor Salvago. How many other productions manage to
incorporate a boxing training session into proceedings, as if to underscore the
lavish obscenity of the violence? The humanity of the genuine artist, Carlotta,
is underscored equally well, not least given an exemplary, heartfelt
performance from Catherine Naglestad. She looks for the soul and perhaps she
finds it: or perhaps, given her fate, she realises there is none at all, and is
better off out of the game entirely. In that, encasing herself, she becomes an
installation, perhaps an artwork of her own. The raging rodent crowd —
more than a nod to Hans Neuenfels’s Lohengrin — would
neither understand nor care. Salvago does though — we think.

The Bavarian State Orchestra under Ingo Metzmacher played with such glorious
golden tone that it might have been the Vienna Philharmonic in Strauss —
other, that is, than the score itself not having Strauss’s sense of
drama, of direction, of characterisation, and so on, and so on. There was no
sense of hurrying, which may or may not have been an unalloyed advantage. I
think it was pretty much an advantage, for one certainly gained the impression
of the score being permitted to speak for itself, even if to be hoist by its
own petard. John Daszak gave a deeply moving account — like so many of
the performances, seemingly moving beyond the limitations of the work
‘itself’ — of the central role. Christopher Maltman proved
diabolically irresistible as his wicked opponent in love, art, and so much
more; there was more than a hint of an ultra-decadent Don Giovanni here
(definitely without the idealism — or Idealism). Tomasz Konieczny gave a
magnificently forthright performance as Duke Adorno: duly ambiguous as to whose
side he was on, if any, never anything but fully committed, though, in vocal
terms. The doubling of his part with that of the Capitaneo di giustizia —
gleefully ripping off his mask to confirm what we suspected — only
heightened the troubling implications. The huge cast did not, so far as I can
recall, have a single weak link to it; this, and the equally fine choral
contribution showed just what an opera house and company can achieve. The
extraordinarily self-reflexive quality of the evening and its aftermath will, I
suspect, continue to intrigue. The Vorspiel zu einer Drama, the
concert version of the opening Prelude, both says it all — and yet, in
another way, says none of that.