Wagner described Tristan und Isolde as a dramatic action rather than an opera. An actor’s director, Carmen Jakobi seemed to have this in mind. With a mostly empty stage and a few geometrical building blocks around which the singers acted, Ms Jakobi emphasized theatrical drama through the aesthetic of Japanese Noh Theater. Set and designer Kimie Nakano’s creations reminded me of Samurai fashion. Her sharp designs suited the elegance unfolding on stage. Ben Ormerod’s exquisite colours in light and shadow highlighted the moonstruck melodrama.
The singers in their acting elevated the experience to the sublime.
During the First Act, Ms. Bisset displayed Isolde’s venomous hatred towards Tristan through fierce acting. Harriet Williams sang Brang‰ne with a concerned gravitas. As Isolde’s handmaiden and confident, she counterbalanced Ms. Bisset’s raving passions. She even relayed some slightly Sapphic suggestions to the erotic overtones of Wagner’s music.
After Brang‰ne switched Isolde’s intended poison for Tristan with a love potion, the lovers collapsed on stage, while reaching in a desperate grasp longing for each other. Wedd and Bisset’s chemistry heightened the love between Tristan and Isolde with profound effects. 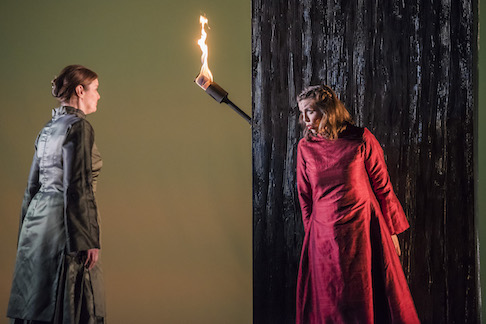 Lee Bisset as Isolde and Harriet Williams as Brang‰ne
In Act II, the two stars continued to fire up the drama. In their love duet, these two expressive powerhouses erotically charged their chemistry with rapturous kissing and lustful groping. I haven’t seen anything so explicit, yet elegant and authentic, quite like this before in Wagner. I don’t know enough about the man, but based on his highly charged music, I am pretty sure he would have approved of this sexual display.
In the final act with Tristan’s rotting flesh wound inflicted by Melot on full display, Wedd created a terrific momentum. With rip roaring vocal energy, he brought out all the drama in his part. “It’s all about the und in Tristan und Isolde,” I can still hear my college teacher proclaim. As Wedd sung about his love for Isolde, his other half, his und, I finally got what Mr. Stephenson meant: there’s no love without and. Tonight, what used to be a mere academic idea became a passionate memory. I was so struck by my epiphanous recollection, I actually let a laugh escape. 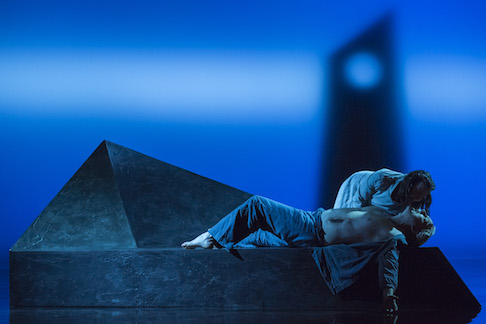 Peter Wedd as Tristan and Lee Bisset as Isolde during the Liebestod
The other actors certainly added to the drama. Stuart Pendred’s Kurwenal offered convincing despair over the dying Tristan. Though his acting conveyed the worry and love for his fraternal companion, Pendred’s voice lacked body. After having been told about Brang‰ne duplicitous switch, Geoffrey Moses with avuncular conviction frailly vocalised Marke’s compassion for Tristan. Stephen Rooke conveyed Melot effectively: I just wanted Tristan’s nemesis to die.
A protege of Boulez and loyal Bayreuth enthusiast, Negus invigorated Wagner’s magnificent suspense ceaselessly, though not without a few off sounding passages from the orchestra. The Brass unnecessarily relocated above the audience towards the end sounded painfully muffled. However, the extraordinary singing positively inspired the orchestra to great heights. With the strings swelling and contracting, Negus offered dynamic momentum to Wedd and Bisset’s sizzling eroticism.
Ms. Bisset stole my heart as Isolde. I envy the audience who heard her Sieglinde. I checked all Ms. Bisset’s future engagements. For now, one must travel to Britain to witness her talents. With their chemistry conveying true love with such authenticity, I can’t imagine I will soon encounter another coupling quite like Wedd and Bisset.
During the applause, after Isolde’s Liebestod and the music had died off, this modest soprano appeared to be so drained from her performance, so utterly exhausted, it seemed Ms Bisset herself would burst into tears. Based on the flamboyant characters in the audience, this in-crowd appreciated all too well the rustic excellence at Longborough. I cannot wait to have my heart broken again here.
Next year at Longborough Opera Festival, you can experience Wagner’s Der fliegende Holl‰nder.
David Pinedo