When Israel Mizrahi’s set and costume designs debuted at Opera Theatre of Saint Louis a few years back, I opined: “At long last we have been treated to a multi-faceted production that not only equals, but in many ways surpasses the dazzling original.” DMMO’s Blank Performing Arts Centers has a thrust stage configuration similar to St. Louis, and Mr. Mizrahi’s set design proves to be a most congenial fit. The magnificent forest of massive trees is a veritable Shakespearean garden. Positioned upstage of the proscenium, the trees are suitable for climbing, perching, and frolicking. A lush green grassy ground cloth is carried forward onto the thrust front of the pit, dotted with strategic stumps and flowery mounds for additional seating possibilities.
Boris Aronson’s original scenic concept was all tracked scenery and cinematic dissolves which informed how the piece developed and was played. Since the DMMO venue afforded no computerized movement capability, director Matthew Ozawa carefully devised a choreographed shifting of necessary furniture, props, and doors. The theatricality of the effect proved to be visually engaging and dramatically fluid. Only twice did we have to wait a bit for the setting to be completed (placing and removing the massive dinner party table for example), but we were compensated with some tasteful instrumental Sondheim variations. The only stationary furniture is a handsome grand piano up left, that is delightfully out of place in this bucolic Eden. Nate Wheatley’s magical, sensitive lighting design captured all the intrigue and mystique of a midsummer night when the sun never quite sets.
Mr. Mizrahi (who had also directed in Saint Louis) also bequeathed a stunning array of costumes to Mr. Ozawa. From stuffy straight-jacketed business and formal attire to the suggestive undergarments and accoutrements of half-dressed cast members lounging (and longing) on stage, this was a costume plot by turns gleefully hedonistic and repressively, gorgeously laced up. The whimsical little angel wings attached to the quintet and some servants at once suggested cupids, angels, and fireflies flitting in the perpetual Swedish twilight. 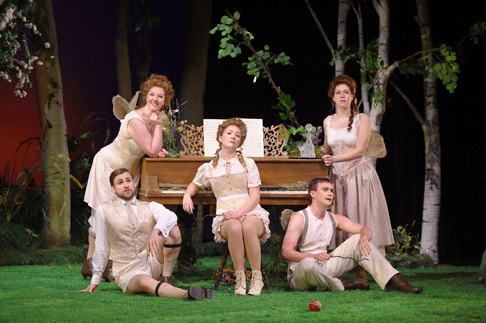 The Liebeslieder Quintet
Director Ozawa forged a good blend of Swedish directness and an American penchant for sentimentality. Hugh Wheeler’s libretto remains a model of civilized wit, and the direction explored rich subtext, coupled with telling stage business. Inventive blocking made full use of the sprawling playing area, and character relationships were well defined. Initially, I resisted the somewhat stilted, quaint elocution of the spoken lines, declared with operatic resonance to the back wall rather conversing with each other. But I was soon enough won over by the attention to diction and the absolute success in setting up and landing the many laughs.
Fresh from a triumphant star turn the night before as Maria de Buenos Aires, damn if Elise Quagliata didn’t score another knockout performance with her acerbic, self-effacing Countess Charlotte. Ms. Quagliata not only made the long-suffering wife all too human, but she delivered every one of her scripted comedic zingers with laser accuracy. Moreover, Elise sang the part with a vibrant, plush mezzo that was richly sympathetic.
Kelly Kaduce proved to be a predictably beguiling Desiree Armfeldt, largely owing to her being one of opera’s pre-eminent actresses. The role was originally written for the slightly weathered physical beauty and extremely limited vocal means of actress Glynis Johns. Indeed, Ms. Johns decidedly belongs to the Lauren Bacall, whoopee cushion method of tonal production. It is ironic that one of Sondheim’s best-loved songs, Send in the Clowns was specifically crafted to her one octave range and shortness of breath.
Since Ms. Kaduce is not only too youthfully beautiful for the aging actress, and since she sings with a polished, poised soprano, I wondered how she would manage. My fears proved groundless, thanks to Kelly’s knowing (if sparing) injection of an underlying sadness for her life’s routine, and her (and her coaches’) success in finding ways to make the part “sing” that was uniquely hers. I have never heard The Glamorous Life patter actually sung before, albeit up an octave and with delectable operatic flourishes. In short, Kelly Kaduce has added another jewel to her repertoire by making Desiree her own special creation.
As Madame Armfeldt, the venerable mezzo Joyce Castle deployed exquisite diction and evergreen vocalizing to make a mini-drama out of Liaisons. Written for the gravely bass range of character actress Hermoine Gingold, Ms. Castle negotiated the subterranean passages with a firm legato. What’s more, she has the timing of a seasoned comic and drew some of the evening’s biggest laughs with her imperious delivery. Her withering delivery of the word Raisins was perfection. 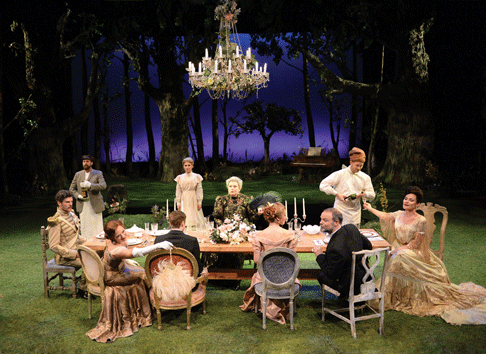 The Dinner Scene
Troy Cook’s assured Fredrik Egerman was marked by a clean, buzzy baritone that was uncommonly supple. The tricky patter of Now was tossed off with consummate ease. Mr. Cook has a sincere delivery, the right look, a wonderful chemistry with Ms. Kaduce, and many sterling artistic attributes. I only wish his resonant declarations sounded a bit more truthful and less operetta-ish.
Lauren Snouffer is a deliciously giddy, virginal Anne Egerman, feigning naivete with convincing results. Ms. Stouffer’s shimmering soprano gleamed above the staff, and her pure sense of line enchanted the ears. Her foil (and eventual lover), Herik Egerman was winningly taken by Quinn Berneger. His pleasing lyric tenor effortlessly suggested the conflicted young man’s duplicitous character, and his enthusiastic ‘cello playing’ did not distract him from offering a firmly sung Later.
Talented local high school student Aviana Gedler proved a real find, as she turned in an assured performance as the young daughter Fredrika Armfeldt. Melanie Long was an especially perky Petra, her sassy sexiness bringing a welcome brazenness to counter the propriety of the other repressed, clandestine philanderers. Her powerful, well-considered version of The Miller’s Son, was securely delivered, even if containing a few wayward sustained pitches. John Graham made the most of his stage time as the horny Frid.
The one principal cast member I had seen in his role before is the assured, distinctive baritone Lee Gregory. Of his Saint Louis Carl-Magnus I wrote: “At first I thought Mr.Gregory’s Dudley Do-Right approach might not wear well, but his utter belief in it, and relentless delivery of it ended up being a very satisfying portrayal. Coming off more the stupid prat than usual, the story was the richer for it.” While Lee still sings with gleaming security, I found his take has become more caricatured. With all of the other performers grounded in heightened realism, it seemed that this appealing, talented performer was in another show.
You will likely never hear a finer sung rendition of this score, and much of the glory must be shared by the Liebeslieder Quintet of singers who were splendidly matched, soloing magnificently and blending smoothly as required: Charles H. Eaton (Mr. Lindquist); Chelsea Miller; (Mrs. Nordstrom); Grace Kahl (Mrs. Anderssen); Christian Sanders (Mr. Erlanson); and Stephanie Schoenhofer (Mrs. Segstrom). These attractive, gifted singers from the Apprentice Artist Program present and past, are far too young to sing about “remembering” sexual peccadilloes that are well in the past, but they are most appealing, and sing Sondheim’s complex vocal writing with conviction.
In the pit, conductor Eric Melear drew nuanced, colorful playing from the orchestra. I never cease to marvel at Jonathan Tunick’s flawless orchestration, the waltz scoring evoking a sinuous Ravelian sweep. Maestro Melear sometimes favored more deliberate tempi, but his collaboration with the singers and his identification with their phrasing was complete.
A Little Night Music has nothing “little” about it, as it adds up to a “lot” of classy entertainment.
James Sohre