Hate breeds hate. What happens to a person when his family is killed, he is turned into a slave, manipulated and forced to suffer in isolation? You become a vengeful madman. Not so different from disenfranchised young men and women in our modern world.
Part of the 19th Century epic poem “Kalevala”, assembled from Finnish mythology and folklore, the legend of Kullervo recounts the life of this young man, whose uncle Unto kills his father and his family. Kullervo survives, is sold as a slave to a herd’s man. Discovers his family survived somehow, but realizes now he slept with his sister. Greek tragedy, Finnish style.
Due to delay of construction of the new Helsinki Opera House, this Finnish commission premiered instead in L.A. It opened a year later in Finland. Heiskanen’s barebones production doesn’t constrict the opera to any time or place and gives it a sense of immediate relevance. His stage direction emphasised the dramatic action between the performers.
He used the choir’s presence to full effect: from the moment the opera opens with the choir, blasting at the audience, in a narrating function similar to the ones in Greek Tragedies. It reminded me of the dramatic resonance of Pierre Audi’s abstract productions in Amsterdam. Though, Sallinen throws in several twists and turns that totally threw me off. 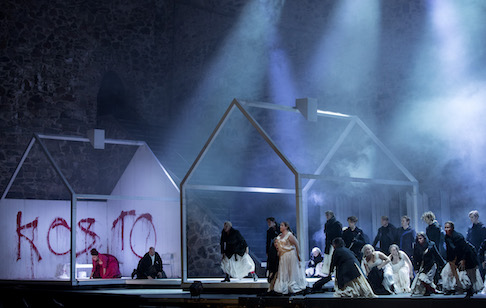 The Choir as Unto’s tribe during Kullervo’s slaughtering spree
Antti Mattila’s simple set design with four houses, three merely frames, and one black cabin inside golden, where Kullervo’s dramatic family moments took place. A captivating energy flowed between the actors across the stage generating a thrilling momentum. The staccato rhythm of the Finnish language added to the violence of the drama. Completely unfamiliar with Kullervo, I read the libretto, so when I got caught up in the engrossing drama, I would forget to read the surtitles!
Ville Susanan carried the role of Kullervo with a glamorous star quality and gritty vocals. Full of brutal impatience, his voice filled with a fatalistic despair, yet with a concealed receding sensitivity beating underneath his outer shell.
Daniel Karlstrˆm provided the voice hope. With his boyish innocence, he compensated the violence and hatred in the air between other characters. As Kimmo the slave boy, who cares only for Kullervo’s happiness, he provided a sense of humanity to the goings-on. His failure to protect Kullervo results in his own madness. In the epilogue, right before Kullervo jumps into a fire (in Heiskanen’s staging a doorway opens, possibly to the underworld), Karlstrˆm gives an eerie goodbye as Kimmo. 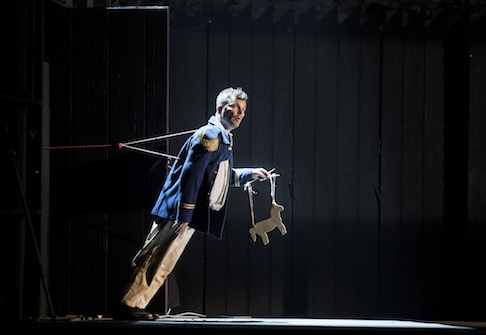 Karlstrˆm as the voice of hope in the end gone mad
The libretto filled with sexual tension to Sallinen’s feverish music during Kullervo’s scene with the herd man’s young wife. Nina Keitel brought seductive tones in her manipulative role. She seduces and ultimately betrays Kullervo: “the moon shined down, round and beaming/and full of warm anticipation/But now the moon is lean, like a sickle/Yes you are coming, coming alone”.
Then Kullervo sings of her betrayal. She has baked a loaf of bread with a stone inside. Kullervo blasts her action: “Look! Look what you’ve ruined. Look at my/father’s knife/it’s been broken in pieces/It has been castrated by a single stone.”
All this led up to one of the many climaxes. First, an unplanned moment occurred when one of the gulls that swarmed outside the castle, had positioned itself in a portal high above the stage. Right before Kullervo kills the wife, and Keitel sings with the mightiest vibrato blasting through the castle, the bird flew down over her across the audience, as if even this loudly squawking creature could not endure Sallinen’s musical violence.
The rest of the Finnish supporting cast also proved indispensable. Sallinen has a dark sense of humor. The role of the foolish hunter was conveyed annoyingly well by Petri B‰cktrˆm. Niklas SpÂngberg and Tiina Penttinen as Unto and his wife, fuelled by alcohol, made for an angry and embittered couple.
Sallinen’s surprise came at the beginning of the second act, during Kullervo’s dream sequence reveals he slept with his sister and had a child. Sallinen just threw me off. Did this really happy? And…Jazz? Birthe Wingren athletic singing and dancing as the Blind Singer revealed her impressive stamina through Sallinen’s bewildering and grotesque Cabaret sequence. Yet after the dream, or rather nightmare, Sallinen’s opera returned as if nothing has happened, seamlessly continuing the earlier musical suspense of Kullervo’s narrative. 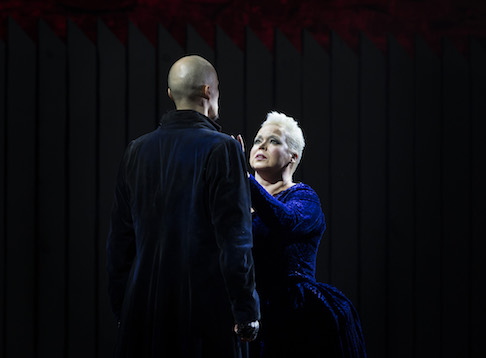 Powerhouse Rusanen-Kartiano sings of mourning her son Kullervo?
The showstopper of the evening belonged to Johanna Rusanen-Kartiano. She already had delivered some exquisite vocals earlier entwined with Kullervo’s sister together with the grand sound of Sanna Matinniemi’s voice. After he confesses of sleeping with his sister and his father banishes him, it was her uncompromising love that resonanted. This made for the poetic passage in the libretto. When Kullervo ask his mother if she will mourn his death:
I will weep the whole verdant Spring.
If I cannot keep on weeping
in the presence of other people,
In the sauna I will hide,
weeping till salt tears shall flood it,
and my tears have washed its floor.
Myself and the audience was crushed by the unconditional maternal love delivered by Rusanen-Kartiano as Kullervo’s Aiti. The applause for her was explosive.
It’s not strange that Heiskanen’s staging still resonates twenty five years later. It withstands the test of time. As somebody in Savonlinna told me, this legend is in the DNA of every Fin, and so is the opera. I can see why. When it’s staged again, I will be there to see it for sure!
David Pinedo