Streaking shards of blue – the surging waters of the Volga that will engulf
K·t’a, or perhaps the electric flashes of the storm which propels her
fateful confession – shoot across the wide stage at Holland Park, as
piercing as the timpani’s thumping fate motif.

A boardwalk weaves around a steel ‘cage’ housing some Edwardian furniture
and a samovar – hinting that the oppressive hounding of the individual by
communal conformity was just as prevalent in the early-twentieth-century
West as it was in the nineteenth-century Russian village where Alexander
Ostrovsky sets his realist play, The Storm, which is the source
for the composer’s libretto. Fuchs’ ‘gentrification’ of the milieu might
also be justified by Ostrovsky’s own setting of K·t’a hopeless plight as an indication of the
power of the ruling merchant ‘autocracy’.

The wide span of the Holland Park theatre does not really lend itself to
intense psychological drama but Fuchs’ direction is as economical as
Jan·?ek’s score, clearly and precisely charting the opera’s rapid
progression from turbulence to tragedy. Just as the unbending bars of the
cage on the left of the stage emphasise the ever-present binding grip of
community and tradition, so the reed beds far right suggest the
irresistible dream of escape which provides a dramatic counter-force. 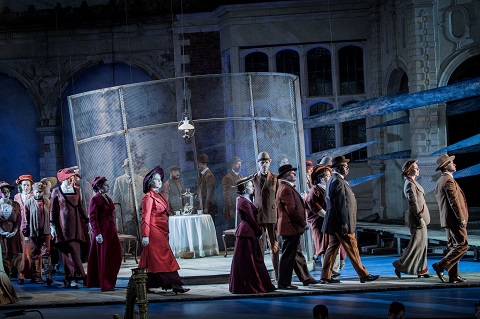 The chorus don’t have much to do, for Jan·?ek – who was not really
interested in presenting a social critique of the Russia of sixty years
before – reverses Ostrovsky’s focus from the town onto K·t’a herself. Fuchs
and movement director Clare Whistler effectively use stylised movement to
suggest both the facelessness and the monotony of repression.

In the title role, Swedish soprano Julie SporsÈn was perhaps more effective
at conveying K·t’a’s later rhapsodic intoxication on dreams of passion and
freedom, than she was at capturing her fragility and meekness in Act 1 in
the face of Kabanicha’s cruel domination. I felt that a softer edge to the
sound was required to evoke the young girl’s docility – after all,
initially the tension is not between K·t’a and the community, for she
shares the ‘values’ which Kabanicha and DikÛj impose; and a singer needs to
capture both K·t’a’s compliance and her self-scrutinising fear of
transgression. 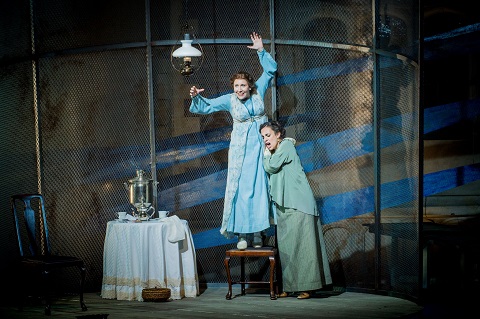 But, in K·t’a’s monologue with Varvara, SporsÈn convincingly suggested the
nascent hysteria within K·t’a’ as she realises that her only hope is to
prevent Tichon’s departure. And, in the double love scene in Act 2, her
melodic lines swelled with limitless emotion, as if simply by singing
without cease her revelation and love could be made to last forever. ‘Now
observation that time is passing, as the night-watchman marks the hour. 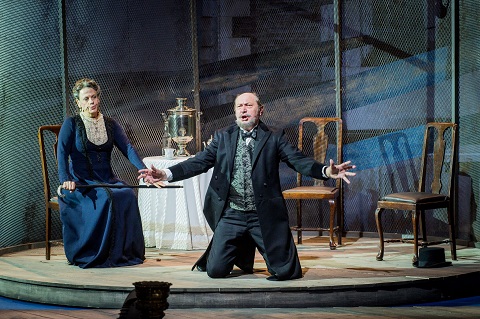 Anne Mason was superb as Kabanicha. Her mezzo was burnished and powerful,
leaving no doubt of Kabanicha’s nastiness without descending into
caricature. Her disparaging sneer, ‘Is he a lover you’re saying goodbye
to’, at the end of Act 1 revealed her utter lack of compassion. Mason was a
disturbing combination of frightening hostility and almost farcical
hypocrisy – and Fuchs’ hint that Kabanicha and DikÛj, sung with stentorian
stature by Russian bass Mikhail Svetlov, are secret sadomasochists was
uncomfortably credible. 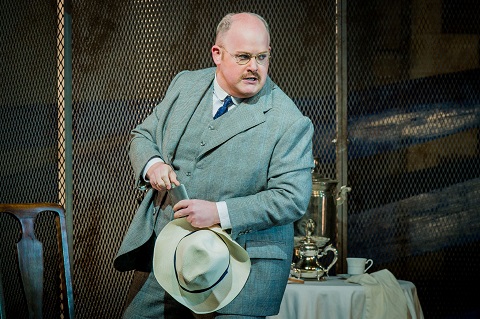 Nicky Spence and Peter Hoare must be getting used to pairing up in
Jan·?ek’s operas having appeared together earlier this summer at Grange
Park Opera in Katie Mitchell’s 1998 Welsh National Opera production of


, reprising a partnership formed at ENO
in David Alden’s production of the work last year. They were equally
comfortable in their roles as Tichon, K·t’a’s weak-willed husband, and
Boris, her impetuous lover, respectively.

Spence was utterly credible as the put-upon merchant who swigs
surreptitiously from a hip flask to avoid the stresses of both his business
and his mother’s bullying. It’s certainly the only spirit in him; but, it
also makes him deaf to K·t’a’s pleas. 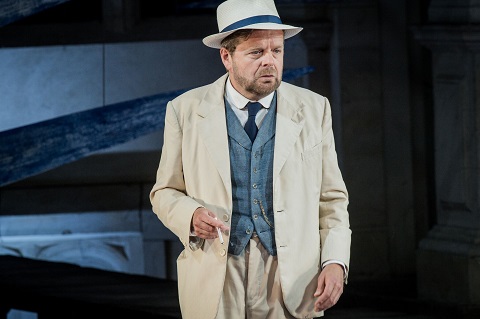 Hoare’s tenor soared with strength and passion, but Boris is no dark,
brooding Laca, and Hoare’s characterisation brought out his
irresponsibility and immaturity. Boris is an outsider in the community –
Ostrovsky’s stage directions indicate that he should wear Western dress –
and it is fitting that Fuchs makes Boris the first to dare to step from the
restrictive wooden platform into the rushing Volga, coaxing K·t’a to follow
him into the waters which represent, for her, both life and death.

Clare Presland was a charming, characterful Varvara, her strophic songs
offering some much-needed, if temporary, relief from the prevailing
tension. Presland used her full-toned mezzo to communicate Varvara’s
free-spirited amorality: she believes that it doesn’t matter what you do as
long as you don’t get found out. But, this was a rounded portrait and
Presland did not suggest that Varvara was blameless. She and Paul
Curievici’s personable, warm-voiced Kudrjaö might have been a little more
impassioned in their Act 2 duet, but, then, the joy of the moment is merely
a fragile peace. 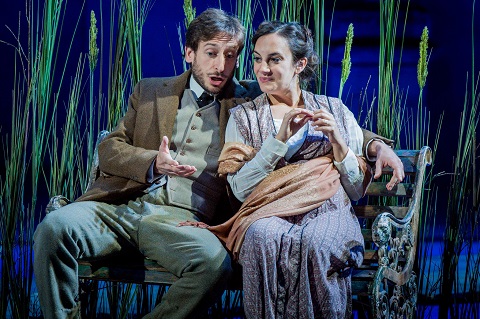 Sian Edwards drew precise, taut playing from the City of London Sinfonia
but I missed some of the ‘rawness’ of Jan·?ek’s score: the contrast between
the extreme juxtapositions of high and low, the almost suffocating mass of
the whole ensemble. The chromatic turn figure which conveys the lovers’
anxious expectation should surely plague one’s heart like the twist of a
knife; the troika should explode with almost feverish vigour, indicating
and inflaming Tichon’s agitation. Perhaps Edwards was cautious so as not to
overpower her cast, but a few more risks would have raised the
psychological thermometer still further.

Fuchs controls the ending’s rapid denouement skilfully. Hypocrisy and
injustice resonate with discomforting power. But, in fact, K·t’a is
defeated by her own shame at having destroyed her moral values.
She recognises that the ecstasy of religious fervour has been replaced by
an erotic giddiness: the storm is, DikÛj proclaims, a punishment from God.
And she believes him. Overcome by her own conscience, she kills herself:
which makes Kabanicha’s proud, self-righteous claim of ‘victory’ so
brutally ironic and the final pounding of the timpani’s ‘inevitability’
motif so mocking. The only relief is the wordless chorus – the soul of the
Volga – whose voices sweep K·t’a away.