Ms. Rae not only has all the fireworks in her arsenal to effortlessly negotiate the roulades, trills, arpeggios, embellishments and melismas, but also has a poised, polished, bell-like soprano, freely produced and serenely secure. While hers is not an overly large lyric instrument, the clarity of her technique gives it great impact in the house.
Her attractive physical presence lends for a totally believable, love torn young woman, and she can suggest a tortured victimization and highly affecting fragility. Brenda finds every dramatic nuance in a generous, musically faultless realization, in short, a wholly winning traversal of one of the repertoire’s “gold standard” roles. Having scored successes in Frankfurt, Munich and now, Berlin, Brenda Rae seems to be on a career trajectory that echoes, without mimicking Diana Damrau. Ms. Rae offered exceptional singing.
Offering even more in the way of an individualized, characterful role assumption, bass Christian Van Horn gave his finest performance that has reached my ears to date as Raimondo Bidebent. Just as Mr. Van Horn physically towers over the other performers, his rolling, eloquent bass asserts itself with an imposing, visceral presence. His every appearance was a cause for bel canto celebration.
Zachary Nelson finds a very happy fit for his gleaming Italianate baritone as the manipulative brother Enrico Ashton. Mr. Taylor offers ear and eye candy in his second, um, appearance, as a comforter is turned down on his bed, revealing his reclining buff upper torso, prompting much raising of binoculars. Zachary’s potent stage presence was wedded to mellifluous singing deployed with focused dramatic intent. 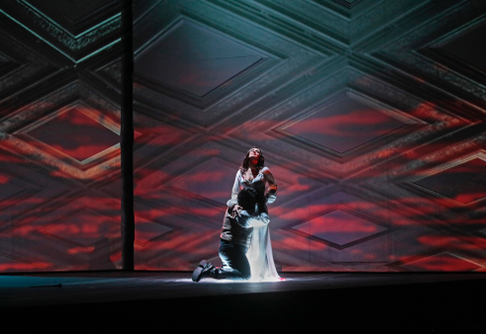 Brenda Rae as Lucia,
Mario Chang as Edgardo
I quite liked Mario Chang’s Edgardo, which featured a warm, pointed lyric sound, and a good sense of line and phrasing. If Mr. Chang pressed a little hard at times, or lumbered a bit through the occasional high lying passage, this was nonetheless a commendable take on a treacherously difficult role. I encourage Mario to take a lesson from other tenors of similar physical type, and cultivate a more engaging vocal charm that will elevate the romantic exchanges into more meaningful theatre.
Three Apprentice Artists covered themselves in glory: Sara Coit’s warm, solid mezzo and Carlos Santelli’s gleaming tenor shone in solo lines and added immeasurable depth to the famous sextet. The role of Normanno was well-served by tenor Stephen Martin’s poised singing. Chorus Master Susanne Sheston’s chorus was musically pleasing and dramatically engaged.
Conductor Corrado Rovaris led an incisive, propulsive interpretation. At first, I thought it might be a little too restless and driving, but the Maestro knew exactly how to balance the evening’s set pieces. Rovaris flawlessly partnered with his soloists to relax and indulge the romantic revelry and reflective solos, even as he turned up the heat again for some riveting dramatic confrontations. The orchestra played with stylistic acumen. Worthy of special mention is Friedrich Heinrich Kern’s atmospheric playing of the glass harmonica, a rare treat in the Mad Scene.
The design seemed to straddle two worlds. Riccardo Hernandez has crafted a rather simple, 21st Century set design consisting of two large side walls creating a V-shape that can retract to reveal another wall up stage center. They are imbedded with well-concealed rows of large doors that occasionally open to create a colonnade effect. Alas, in an attempt to make them into a seamless wall when desired, the doors seem to have been tightly fitted, producing recurring scrunching sounds that get unwanted titters from the audience.
There are cockeyed images of wooden ceiling panels on these walls, suggesting the oppressive, skewed atmosphere of rigid Scottish political intrigues. Peter Nigrini has designed some effective projections overlaid on these panels, evoking greenery, blood, graveyard and more, all of which augmented Christopher Akerlind’s effective lighting, which featured moody washes and meaningful specials. The walls provided excellent reflective surfaces to give the singers even more presence.
With the addition of a clear modern acrylic fountain in Scene Two, and with the look beginning to suggest a B&B Italia showroom, costumer Emily Rebholz kept the piece grounded in tradition with a sumptuous interpretation of palace attire. You had to squint a bit for any touches of plaid (they were there) but, oh my, what a visual feast. The women’s gowns were especially eye-catching and the color palette was suitably luxuriant.
Ron Daniels provided clear, efficient direction. While there were no jarring innovations, neither were there any startling revelations. Mr. Daniels trusted the piece and the luxury of helming some of today’s top interpreters, and kept it simply effective. Lucia’s brandishing of the bloody bed sheet, and her appearance to Edgardo as a bridal spirit after his suicide were nice touches.
Santa Fe Opera seemed to embrace the concept of “yesterday’s opera today.” Traditional elements and stellar performances were married to inventive 21st design components that made for a smoothly integrated, highly engaging rendition of this Donizetti masterpiece.
James Sohre