One unwavering element in this long (3-1/2 hour) evening was the excellence of the musical execution. Chief Conductor Harry Bicket led a magnificent instrumental ensemble who responded with a richly detailed reading that was as diverse in its colorful effects as it was supple in its rhythmic propulsion. Maestro Bicket is justifiably renowned for his way with this genre of course, and his baton inspired all concerned to music making of the highest order. The cast of singers was also decidedly first tier.
In the title role, the elegant soprano Elza van den Heever has conquered another Everest role in her growing reputation and repertoire. Her well-modulated voice has just a hint of steel in it that serves her well in the sorceress’s furious outbursts. Sometimes though, her dramatic immersion turns otherwise creamy tone a tad shrill. Her soft singing was wonderfully controlled and she could skillfully draw us in with a messa di voce that scaled down to a near whisper, even if in the process of these melting piano phrases she did sometimes dispense with consonants. Ms. van den Heever’s phrasing and breath control, her meticulous passage work, her passionate dramatic investment, and her fluid physical movement, all combined to create an impactful musical characterization.
Daniela Mack was a dynamo (dynama?) as the conflicted Bradamante. Ms. Mack is a major talent with a luminous mezzo that easily encompasses the divergent demands of this challenging part. Her astonishing, fearless coloratura fireworks threaten to out-Cecelia the great Bartoli. Her melting laments pierce the heart. Her dramatic commitment informs her distinctive vocalizing to create a memorable role traversal.
Paula Murrihy, a witty Orlovsky in Fledermaus, turned on a stylistic dime to offer a superlative account of another trouser role, Ruggiero. Her splendid phrasing, enchanting timbre, and meticulous technique proved a bewitching combination, allowing her to spin out wondrously sustained vocal lines, and toss off beautifully calculated melismas, peppered with florid ornamentations and even surprising staccato effects. Ms. Murrihy’s plush, vibrant treatment of her arias was rewarded with some of the evening’s most sustained ovations.
As expected, soprano Anna Christy was once again her delightful self as Morgana, animated in her stage presence, and singing with soaring lyricism and absolute precision. Ms. Christy has to be one of operadom’s most endearing soubrettes, possessed of an impeccable technique and a vocal quality characterized by an agreeable silvery glow. Anna seems to be having the time of her life and is happy to take us along for the ride.
Handel does not give Melisso a great deal to do, but we were grateful that Christian Van Horn was on hand to do it. Mr. Van Horn’s solid, individualized bass was a welcome occasional balance to all the higher voices, and his accusatory aria was fluidly and powerfully delivered. Alek Schrader’s characterful tenor was deployed to create a distinctive Oronte. Past roles have proven Mr. Shrader can be an inspired physical comedian, and his proclivity for pratfalls and manic movement was on ample display here. He must also be the only tenor in history who, in one performance, is required to sing beautifully while a) holding a cigarette in his mouth; b) executing a repetitive dance step recalling “The Pony;” and c) jumping up and down in an ape suit. The role of the boy Oberto seems almost an after thought, but Jacquelyn Stucker performed it most charmingly, showing off a winsome demeanor and a honeyed soprano. 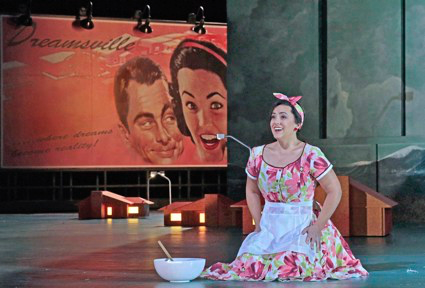 Anna Christy as Morgana
I eschewed LSD in the 60’s, preferring clearheaded operatic studies to an acid trip. Thanks to stage director David Alden, I may have now made up for missed hallucinogenic experiences. Mr. Alden is well known for his post-modernist takes on opera, and he seems to delight in raising more questions than he answers. Together with his design team (set and costumes, Gideon Davey; lighting, Malcolm Rippeth), he has redefined “sensory overload” with a cornucopia of images that would cross Hieronymus Bosch’s eyes. I suppose a magical island can be anything it wants to be, but does it have to be anything and everything? In this case, we are supposedly “in an abandoned theatre.” (Sort of presaging the Crosby Theatre after the second intermission.)
Sure enough, there is a small, ornate white proscenium frame and platform down right, and a long wall of doors the width of the stage just above it. Soon after the downbeat, a few Roxy-like ushers appear (one of them will be Morgana), bizarre Night-of-the-Living-Dead acrobats start clambering over the house walls, and Bradamante (in brown business suits and fedora) and Melisso (as flash camera wielding paparazzo) stroll from the back of the house down the left aisle to the pit railing. All of this was very difficult to see, and impossible to figure out. It did establish the level of clarity for the evening! Not to say that there were not many entertaining moments. Many.
The row of doors came and went, often amusingly deployed with a Keystone Kops chase effect. A performer would disappear through the far left door during an instrumental break, a befuddled character would be left to ponder the colleague’s exit, then the character would re-enter in time to sing again through the far right door, “surprising” the befuddled colleague. You get the drift. This running gag was actually well used, and some of Mr. Rippeth’s trapezoidal lighting effects were wondrously moody.
Once the wall of doors retreated off right, we got into more problematic collages of imagery. It seemed we were now perhaps trapped at A Night in the Museum. Primal artifacts like dinosaur skeletons, fossilized remains, primate extras in ape suits and the like dotted the expansive stage. A “chandelier” suspended over center stage consists of a spinal column culminating in a bony claw from which a bare bulb ghost light is hung. Just try and get that image out of your head now.
And wait a minute, there is a diagonal wall running from down left to up center, on which is reproduced Hokusai’s The Great Wave off Kanagawa. Adding to the confusion, panels soon part in this mural to reveal another stage, with green grand drape, on which action will be played. So we are in an abandoned theatre that “may” be a museum that has a stage of its own, but hold on, let’s throw in an oceanic image to suggest the original island setting, and add a whole lot of evolution-of-the-species implications. And let’s sing Handel while doing it! Too bad George didn’t write Lucy in the Sky with Diamonds. Oh wait, one George was involved in that. . .
Designer Davey also had a field day with his costumes. Yes, Oronte is in and out of a Planet of the Apes suit. Bradamante trades in “his” well-tailored business drag for a handsome cocktail dress and later, in Act III, wears a multi-colored 50’s sitcom ‘mom frock’ with bandana. Morgana is a bespectacled usher, before a wannabe siren, before a Vegas showgirl, before . . .well, how can I be expected to remember? Alcina is most usually in a becoming, slinky black gown, with her “magic wand” signified by her right hand sporting a long neon pink satin glove. This is oddly (and I am sure intentionally) phallic. During Alcina’s tour de force aria closing Act II, Mr. Alden has extras poke pink gloved hands out of the cracked doors in choreographed precision, then they appear over the wall of doors, and then pink gloves begin to trickle from the flies, before raining down on the poor dear, pelting her into a mad cackle at aria’s end.
Did I mention the frequent, tightly performed choreography devised by Beate Vollack? I have to concede this whole lengthy evening was extremely well rehearsed, no more so than Ms. Vollack’s eclectic dances which ranged from Steve Martin “Happy Feet” pattering, to line dancing, to ballroom pairings, to Ms. Christy’s lavish peacock-fanned parody of All I Care About is Love.
Along this Magical Mystery Tour, we were at one point in a science laboratory, with the upstage “stage” backdrop now covered with cave paintings as might have been created by Keith Haring. Aluminum appointments included a sink, which I would like to believe is the “everything-but-the-kitchen-sink” that was now not missing in the eclectic mix after all. Favorite goof of the night found a gorilla-suited extra as Atlas bearing a disco ball “globe.”
Surprisingly, very little of this (mostly) inspired lunacy was a distraction to the musical excellence, and the game performers found a way to commit to the physical staging demands while still singing very effectively. Too, there were several still moments that were arresting in their simplicity. In fact, there may have arguably been a few too many slow, wispy, introspective passages. In a long evening, a bit more pace and presence might have improved what is already quite a good thing.
Of future consideration for producers should be the length of productions, especially one with repetitive arias like these. The parking lot was notably emptier after the second intermission. Perhaps some judicious pruning, and combining the evening into two acts (as is often done in Europe) is an answer to not only keep audiences engaged in the performance at hand, but also to keep them coming back for similar offerings. This Alcina was an entertaining, musically rewarding, and thought provoking evening, which for many reasons will be recounted for years to come.
James Sohre