), Alder has sung Marzelline in the BBC Philharmonic’s Fidelio at
the

, performed with the Academy of Ancient Music in Monteverdi’s Vespers at
the Barbican Hall in June, and contributed to the Wigmore Hall’s ambitious
project, ‘Schubert: The Complete Songs’, participating in an unusual
programme of songs for female vocal ensemble, ‘Schubert and Women’s
Voices’.

Despite this hectic schedule, Alder even managed to find the time and
energy to step into the breach at the Wigmore Hall, when travel problems
scuppered baritone Andrei Bondarenko’s planned recital at
the end of July, and presented at short notice a concert of songs by Hahn,
Debussy, Liszt, Poulenc, R. Strauss and Britten. Interestingly, a
performance by Alder of the latter’s On this Island, which closed
this Wigmore Hall programme, had previously impressed me on the occasion
when I first heard the soprano sing at the Hall in
April 2014
, leading me to declare that the ‘demanding programme indisputably marked
soprano Louise Alder as a name to watch’.

Both that 2014 recital and this July’s concert with pianist Gary Matthewman
included songs by Richard Strauss, some of which have found their way onto
Alder’s debut album,

, which was released last month on the Orchid Classics label. The disc
presents a life’s progress through song – from Youth (Das M‰dchen), through
Longing (Sehnsucht), Passions (Leidenschaft), Partnership (Liebe),
Motherhood (Mutterschaft) and Loss (Verlust), to Release (Befreiung). And,
although the songs in each section do not represent a chronology of
Strauss’s career, the recording is in effect a survey in miniature of a
life’s work, for Strauss composed over 200 songs, from the early
‘Weihnachtslied’ written when he was just six-years-old to the Four Last Songs which were his final musical utterance, published
posthumously by his friend Ernst Roth in 1950. 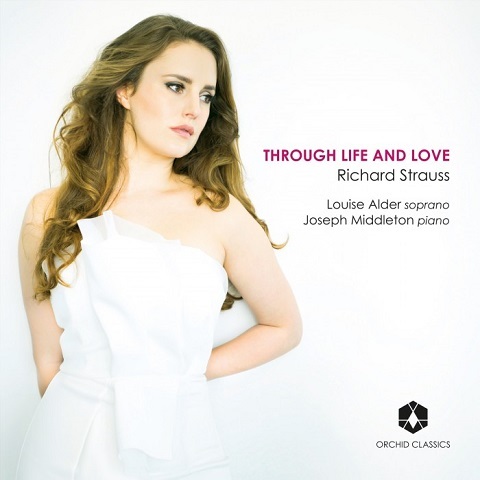 Alder’s soprano is crystalline and has a thrilling shine. Although the
colour palette is not extensive, the purity of sound is startlingly
beautiful, and Alder can make the sparkle still brighter, or diminish the
fullness to a fine thread, at will and with discernment. The German is
well-enunciated – her experience with Frankfurt Opera no doubt informs her
excellent diction – though I am less enamoured of her tendency to heavily
roll the ‘r’s, sometimes quite markedly (particularly in the middle of
words, which can disrupt the sweet sound). It’s a pity, too, that the song
texts are not included in the accompanying booklet. Pianist Joseph
Middleton plays with an elegance that can be stylishly urbane or delicately
reflective, and communicates the narratives of these songs with sensitivity
and insight.

There are two settings of poems by the expressionist poet Richard Dehmel.
Alder negotiates the uncertainty and economy of ‘Leises Lied’ (Soft Song,
Op.39 No.1) with lyricism and focus: the vocal leaps are flawlessly
executed and tuned, and ‘Gl‰nzt mir im Herzen immer’ really does
‘shine’ with radiant youthful ardour. Middleton’s upper register quavers
hover inscrutably, finally ‘resolving’ onto an ambiguous second-inversion
triad. In contrast, the harmonic saturation and flowing melodism of
‘Befreit’ (from the same Opus and included in the section entitled ‘Loss’),
allow us to enjoy the glowing bloom of Alder’s soaring lines as she floats
through the extended arcs. Strauss wrote in his diary on 1 June 1898,
‘Composed song Befreit by Dehmel very beautifully’; one feels he
would add, ‘and sung with exquisite and subtle beauty it was on this
occasion’. Alder and Middleton – who ensures every detail is heard but
remains in a hinter-world between reality and dreams – adeptly suggest that
the emotional intensity is contained within the singer’s heart: what we
hear is the imagined embodiment of a soul’s bliss.

The piano’s restless rippling in ‘St‰ndchen’ (Serenade, Op.17 No.2), first
scintillatingly glittering then dipping down into darker realms, perfectly
captures the youthful excitement in Alder’s voice as she urges her beloved
to creep softly from his bed and join her amid the twilight magic of the
flowers, lindens and nightingales. The harmonic shift of the final stanza,
‘Sitz nieder, hier d‰mmert’s geheimnisvoll’ (Sit, here it darkens
mysteriously), is accompanied by an enchanting retreat to a hushed pianissimo, the deepening harmonic colours suggesting incipient
true passion beneath the adolescent eagerness. ‘Breit’ ¸ber mein Haupt dein
schwarzes Haar’ (Spread over my head your black hair, Op.19 No.2) – like
‘St‰ndchen’ a setting of the poetry of Adolf Friedrich von Schack –
showcases the plush gleam of Alder’s soaring soprano, as rich and flowing
as the imagined streaming black locks, which shines still brighter against
the deeper hues of Middleton’s noble chords.

The latter is the last song in the ‘Longing’ section which opens,
appropriately, with ‘Sehnsucht’ (Op.32 No.2). Like so many of Strauss’s
lieder, this song was dedicated to his wife Pauline, and it was also the
composer’s first setting of the poet Detlev von Liliencron. Here, Alder
shapes the enigmatic fragments thoughtfully: her low voice is even and
poised, but surges with colour when the vision of the road ahead appears
before the protagonist. The fierceness of the avowal ‘If you directed your
eye to me coldly, I would resist, my maiden’ (Und richtest du dein Auge
kalt auf mich,/Ich trotze M‰dchen dir) is startling, but short-lived, as
the image of the beloved’s eye – ‘Wie eine Sonne mir in schwerer Nacht’
(like a sun to me in the heavenly night) – weakens the resistance. Alder
floats to a heavenly top A which captures the soul-piercing beauty of the
burning sun and lover’s gaze. No phrase so purely demonstrates the sheer
beauty of Alder’s soprano, and her technical control, than the final,
sustained declaration, ‘Ich liebe dich’.

The two songs of ‘Motherhood’ form an effective, complementary pair.
Alder’s soprano slips lightly through the confident exuberance of the
adoring mother’s praise for her infant’s golden curly locks, blue eyes and
rosy cheeks in ‘Muttert‰nderlei’ (Mother-chatter, Op.43. No.2), Middleton’s
accompaniment wryly thickening as she admires his perfect plumpness –
‘fatter than a fat snail’! There is pride, awe and joy in Alder’s voice as
she captures the mother’s unconditional love, as embodied in the smoothly
descending melisma, ‘so lieben’. In contrast, ‘Meinem Kinde’ (Op.37 No.3)
is redolent with soft tenderness as the mother leans over her sleeping
child’s crib, Middleton’s swaying cross-rhythms conveying the lilt of the
rocking cradle.

Songs from Strauss’s first published collection, ‘8 Gedichte aus Letzte Bl‰tter’ Op.10 (1885, settings of poems by the Austrian
Hermann von Gilm), both open and close the 23-song sequence. The first song
of ‘Youth’, ‘Nichts’ (Nothing), opens with a playfully leaping
accompaniment – Strauss instructs the pianist to play ‘mit Laune’ (with
humour) – and Alder’s crisp vocal line has a conversational ease. However,
the broadening of the phrasing and the irresistible ascent of the vocal
melody for the question, ‘Ist die Sonne nicht die Quelle/Alles Lebens,
alles Lichts? (Is not the sun the source of all life and all light?), takes
us into the reflective sentiment of the operas. In ‘Die Nacht’ (The Night)
Middleton’s skill in evoking – through the piano’s unceasing, gradually
enriching, pulsing quavers – the unstoppable shadow of the night which
creeps from the woods and extinguishes all the lights of the land, is
matched by the tinge of awe which Alder introduces into her vibrato-light
melody. The sense of disturbing transformation is wonderfully captured
through the change of harmonic colour with the line ‘Alles nimmt sie, was
nur hold’ (It takes everything that is dear), while the growing strength of
Alder’s vocal climbing vocal line suggest both fear and wonder at the
night’s power to take the silver from the stream and the gold from the
cathedral roof, dismissive both of nature and of man’s gods.

‘Zeuignung’ (Devotion), placed at the start of ‘Release’, confirms Alder’s
and Middleton’s ability to encompass both delicate tenderness and blissful
exultation within a song lasting less than two minutes. Middleton, in
particular, seems able to discern the precise moment in the song where
Strauss infuses the flowing triplet accompaniment with an over-spilling
joy, leading into the final stanza with a finely shaped rubato then
enriching the dense chords with power and passion. The disc ends with the
final song in the Op.10 set, ‘Allerseelen’ (All Soul’s Day), in which
Middleton’s sensuous syncopations suggest the underlying emotional tumult
of the recently bereaved protagonist as she strives to relive past moments
of joy. The woman’s delusion is intimated by the harmonic chasm which opens
when she imagines that she is reunited with her beloved, ‘Gib mir nur einen
deiner s¸ﬂen Blicke,/ Wie einst im Mai (Just give me your sweet gaze, as
once you did in May), and Alder and Middleton push on compellingly, making
the climactic Ab declaration that she holds him close to her again even
more tragic and ephemeral. Then, the mask skips: arpeggiations and rhythmic
doubt infiltrate the accompaniment once more, and the self-assurance of
Alder’s final ‘Wie einst im Mai’ is undermined by the falling seventh and
by the overly earnest weight of the soprano’s low register.

Alder will resume her engagement with Frankfurt Oper later this autumn
where she will sing Despina, Sophie (Werther) and, in March 2018,
Clorinda (La Cenerentola). Before that, there are plenty of
opportunities to enjoy Alder’s performances in the UK, when she helps
Classical Opera launch their new venture,

at the Wigmore Hall in September, travels to Scotland to join the BBC
Scottish Symphony Orchestra in performances of Beethoven’s Ninth Symphony
in Glasgow and Perth in September, returns to the Barbican in early October
for a semi-staged performance of Purcell’s


with the Academy of Ancient Music under Richard Egarr, and then heads north
again to Newcastle for a performance of Mendelssohn’s Second Symphony with
Paul McCreesh and the Royal Northern Sinfonia at the

. Clearly, Alder has no intention of resting on her laurels: her star
remains surely and brightly in the firmament.