Conductor Isaac Selya and his orchestra of twenty-seven played the overture with its emotion-inducing harp music as the red sun slipped behind the mountains, leaving orange clouds and purple shadows to introduce the mysteries of night. Director and Designer Josh Shaw used three levels backed by rough walls that resembled ancient ruins as the basis for each scene. Maggie Green’s costumes involved a variety of tartans that evoked the mystique of historical Scotland.
The opera opened with a fight between Lucia Ashton’s relatives and their Ravenswood opponents. Enrico Ashton, Lucia’s brother, sung by Daniel Scofield, won this skirmish, but the war was nowhere near over. Enrico vented his fury in magnificent song at the idea of his sister falling in love with the family’s sworn enemy, Edgardo of Ravenswood. Scofield was only one of the stars of this show who had large, resonant Italianate voices. Tenor Nathan Granner as Edgardo matched him note for note. 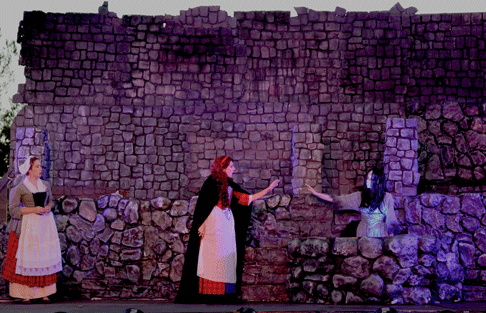 Jacqueline Marshall’s beautiful harp music announced Lucia’s arrival at the fountain where she waited for Edgardo. Bevin Hill was a full service Lucia who hit all the notes at the right times and was able to deal with all the technical aspects of the role. Not every tone was beautiful, however. Following Lucia’s description of the spectre in the fountain, it emerged in the form of a wraith-like dancer who followed the soprano throughout the opera as a prime indicator of her mental state.
When Edgardo, who does not know that his messages to Lucia have been intercepted or that she has been told he loves another, arrived and found her marrying Arturo, he and the guests sang a magnificent sextet. Enrico and Edgardo sang of their fears for Lucia, and she took over the melody. Lyric bass-baritone Nicholas Boragno as Raimondo, the man of God, wondered about an evil end to the situation. Bridegroom Arturo, sung by lyric tenor William Grundler, and Lucia’s companion, Alisa, sung by mezzo-soprano Danielle Bond, sang of their fear for the future. Each character sang about this fatal day in the exquisitely blended sonorities that form the opera’s dramatic lynchpin.
Because Forest Lawn closes its gates on both spectres and living beings alike at ten o’clock, this performance had to skip the Wolf’s Crag Scene in which Enrico challenges Edgardo to a duel. Act III opened on Lammermoor Castle with the guests enjoying copious food and drink. All are shocked when Raimondo tells them that Lucia has murdered Arturo. 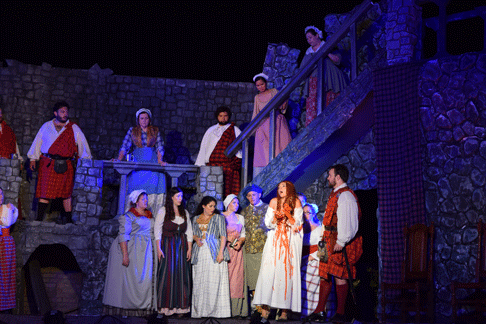 Appearing dazed, Lucia wore a blood-stained gown and held a dagger in one hand as she sang her Mad Scene accompanied by the flutes of Eve BaÒuelos and Michelle Huang. Hill sang with great control but her character was mentally in another world. At the end of this piËce de resistance Lucia fell to the floor, lifeless. Later, in the Ravenswood graveyard, Edgardo hears the bell tolling her death. Stabbed through the heart, he leaves this unhappy world singing of the future he and Lucia will have together in Heaven. Although the story was sad, the performance was enthralling with audience members humming Donizetti’s tunes as they wound their way down the mountain that is Forest Lawn.
Maria Nockin