This world premiere of a spellbinding new one-act opera was inspired by Aleister Crowley’s fairy tale of the same name. Crowley was a larger-than-life British persona, a prolific poet, recreational drug user, magician, bisexual, and founder of his own cultist religion. The company chose to present the work in the long Annenberg Hall of the Barnes Foundation, a massively important collection of Impressionist, Post-Impressionist, and early Modern masterpieces.
Dr. Albert C. Barnes was an American chemist, art collector, educator, and writer.
After growing up in a rough and tumble Philly neighborhood, Barnes earned a medical degree from the University of Pennsylvania, amassing his fortune by co-developing Argyrol, a silver nitrate antiseptic. Along the way, he managed to procure one of the world’s finest collections of late 19th- and early 20th-century art and create the Barnes Foundation, an educational institution dedicated to promoting the appreciation of fine art and horticulture.
While a student at Curtis, composerHertzberg spent a good deal of time at the Institute, and sensed a link between Barnes’ logic of eccentric groupings and mystical symbols on display in his “palace of art,” and Crowley’s elusive visionary tale of Lola and her chaotic, surreal quest to meet and wed her Fairy Prince on the way to a transcendent awakening.
The audience was allowed ample time before the show to experience the stunning collection and begin to absorb a mystique that characterizes the puzzling arrangement of the sequence of images. About 30 minutes prior to the performance, your peripheral vision catches a creature passing through the gallery. Then another. Some are in colorful unitards with skullcaps and faces painted to match. Others might be a fairy princess, a prince, two cranky old clowns. All of them float silently among us, gazing at and being inspired by the art. They become part of the exhibition itself and equally worthy of scrutiny and admiration, thanks to the fanciful costumes designed by the Terese Wadden. 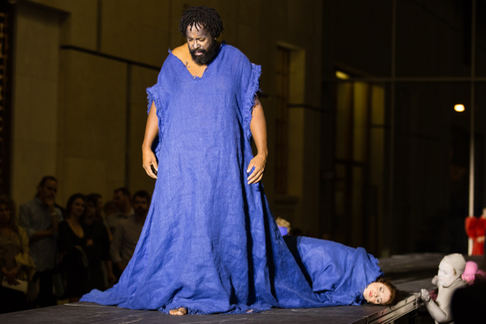 Man of the Blue House (bass-baritone James Osby Gwathney, Jr.)
Eventually the creatures lead us to the great room where we assemble, mostly standing all around a very long runway of elevated platforms. This is the stage proper but much more is in store. The creatures are silently walking, no, gliding among us. And then. . .WHAM! A crashing whack of the bass drum ricochets through the room like a gunshot. And if that didn’t make us perk up. . .WHAM! Another. And another. And then with a wordless layering of vocal sounds, chants, organ like intonements, the cast among us began a musical journey that was an unparalleled delight.
Director R.B. Schlather has realized this otherworldly rite of passage as miraculously executed immersive theatre. In the ritual opening as the voices threaten to reach Nirvana, we “get” that we are encouraged to move around the room as the opera unfolds and a parade begins around the runway like pilgrims at Mecca. When the action begins at one end of the platform and surges to the center, viewers surge with it, not only changing the dynamic of the relationship between “audience” and “actor,” but also the spatial relationship of the audience itself.
I have never seen this sort of interplay work so well, engaging without being demanding, spontaneous yet rehearsed within an inch of its life. Since there is no scenery other than the assembled cast and audience, Jax Messenger’s minimal lighting design contributed some beautiful effects, not least of which was the surprising, almost blinding back light effect that comes from an unexpected place at a crucial dramatic moment. David Zimmerman’s spot on make-up and wig design beautifully complemented Ms. Wadden’s costumes.
The central role of Lola is a big, complicated sing and soprano Maeve Hˆglund was triumphant. Ms. Hˆglund has a solid technique wedded to a rich, alluring soprano that can climb the heights with an easy sheen. She is called upon to execute extreme emotional states, and whether hurling out angular accusations, or musing introspectively, her responsive instrument was a joy to hear. It does not hurt that she is also pretty as a princess and utterly at ease in her stage demeanor. 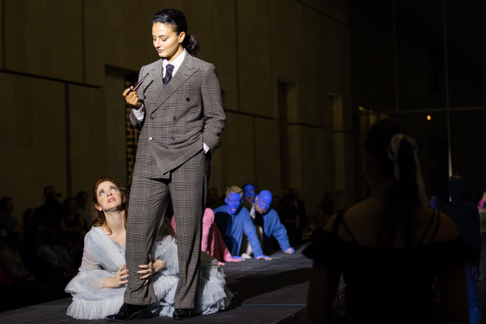 The Fairy Prince (mezzo-soprano Rihab Chaieb), Lola (soprano Maeve Hˆglund)
In the trouser role of the Fairy Prince, Rihab Chaieb matched her co-star strength for strength. Her smoky, beguiling mezzo was poised and pliant, and she cut an exotic, authoritative figure as the swaggering royal. Ms. Chaieb is a first rate musician who ably met the considerable musical demands set out for her, including an easy sensuality in her caressing manner with any number of loving, arched phrases.
Soprano Jessica Beebe made the most of her solo time as Luna/Hecate, regaling us with ample tonal beauty and shimmering delivery. George Rose Somerville was totally invested into his garrulous portrayal of Morbus, and John David Miles hectored with conviction as Pestilitas. The sirens Parthenope (soprano Rebecca Myers), Ligeia (soprano Veronica Chapman-Smith), and Leucosia (mezzo-soprano Joanna Gates) intertwined their polished voices with radiant beauty. James Osby Gwathney, Jr.’s well-modulated bass-baritone made a substantial impression as Man of the Blue House. As the collective ensemble, Palace of Names, the Opera Philadelphia Chorus was superb, offering dramatic commitment as well as ravishing vocalizing.
Holding all of this together was the masterful conductor Elizabeth Braden. The musical execution was faultless, no mean feat with her forces spread across a sixty foot runway and throughout the audience. Maestra Braden found just the right balance between her exceptional instrumentalists and the vocal forces, and made a compelling case for Mr. Hertzberg’s evocative score. There are hints of Debussy, echoes of Strauss, reminiscences of Penderecki, but at the end of the day his is a unique style, and he writes gratefully and inventively for the voice.
But The Wake World not only sings, it soars. Mysterious. Challenging. Moody. Risky. Enriching. What an inspiring night in the theatre.
James Sohre