in 2010, one of my colleagues wrote, ‘There are so many amazing images
in this production that it’s hard to take them all in at once’. Here,
it’s more a case of there are so many diverse visual images that it’s
hard to make them come together in any coherent way.

The sets do establish an ‘epic’ mood: coarse-grained rock textures suggest
monumental edifices and set off Pollard’s striking fabrics, face-paint and
fabulous headdresses (topped with antlers in Act 2!). Bruno Poet’s lighting
design is one of the best things about the production. On the poster
advertising this opening production of ENO’s 2017/18 season, a blade of
light slices through darkness, bouncing off granite to bathe a standing
woman, who gazes aloft as if in supplication, in a cone of light. A similar
triangle of red dissects the black drop which confronts us at the start,
gradually widening and opening up a small geometric space on the wide
Coliseum stage. Throughout, Poet sculpts his light like sliding walls, to
create mystery. Sometimes diagonal rays sear across the stage; at other
times subtle mists shimmer. 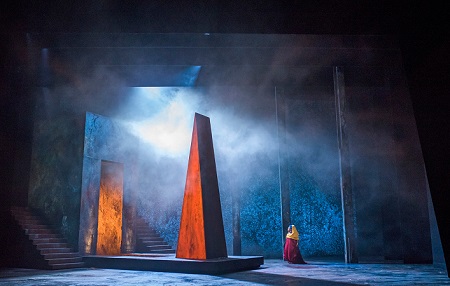 A prevailing hieroglyph – the ‘breadcone’, designating a ‘gift’ or
‘offering’ – evokes a pyramid. But, that’s just about the only hint of
Egypt we get. For, while the visuals are spectacular, they don’t help to
‘tell the story’, and there is no coherent sense of context. A programme
article explains McDermott’s thoughts about the period setting, which he
describes as ‘a slight mash up’: ‘It’s not ancient and it’s not modern. I’m
not dissing the past, but we’ve got modern battle gear and yet priests and
temple dancers too. It’s its own world, like a dream which is not real but
has its own logic and you can do anything with that as long as you stay
within the logic.’

The allusions are indeed eclectic, but I’m not sure I could recognise their
‘logic’. RadamËs first appears wearing a gilt braided blue tunic, topped
with fur pelisse, worthy of a Napoleonic Hussar, but in the fateful tomb he
has ditched his uniform for a grubby grey shirt. The participants in the
sacred ritual which prepares the Egyptian general for battle against the
Ethiopians seem to have been modelled on the semi-clad women who sit behind
the windows of Amsterdam’s red-light district, while the celebrants at the
victory procession sport an array of outlandish 30s-style outfits. The
priestesses of Isis who await the wedding of Amneris and RadamËs look like
they have borrowed their red robes from Margaret Atwood’s Handmaids.
Amneris herself seems to have got trapped in an outsize origami confection. 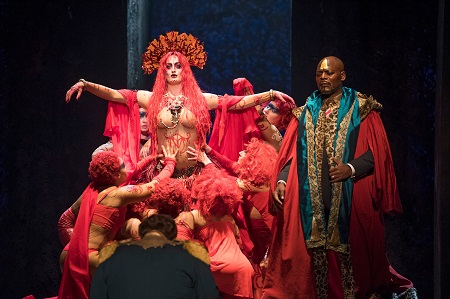 Within this smorgasbord of references there is little sense of who the
protagonists are, of the love triangle between them, or of the
context which pits their love against their loyalty. Static visual images
have taken priority over the development of character and relationship.
There is scarcely any convincing interaction. The programme offers an
account of McDermott’s rehearsal methods: he has encouraged his cast to
‘explore three options: stand still, move forward, or move backwards’.

Most seem to have plumped for the first option. Singers barely look at each
other or engage physically; instead, on the whole they stand stock still,
facing the audience. Basil Twist’s beautiful silks flutter and billow but
the only other movement on stage comes from the dancers and acrobats of
Mimbre, who entertain Amneris when she prepares to welcome home RadamËs by
tumbling light-footedly or forming geometric human sculptures. In the
triumphal scene, some of the latter look so complex and potentially
precarious that perhaps they should come with a warning, ‘don’t try this
at home’. 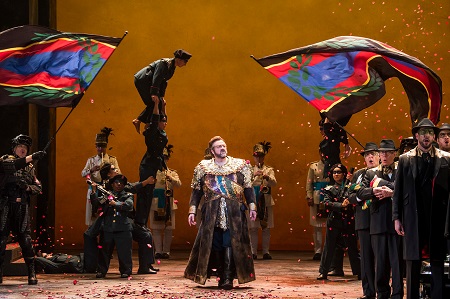 We have no elephants, but there is some flag-waving and coffin-carrying –
and, some terrific trumpet playing from the six onstage players whose
gorgeously warm tone glows with an energy that is missing among the
artfully positioned but static throng. Indeed, the ENO orchestra play
consistently well for Canadian conductor Keri-Lynn Wilson who balances
vigour and refinement, injects tension effectively and conjures exoticism
and magic at the start of Act 3. The enlarged ENO Chorus produced some
beautiful hushed, reverential singing in Act 1. 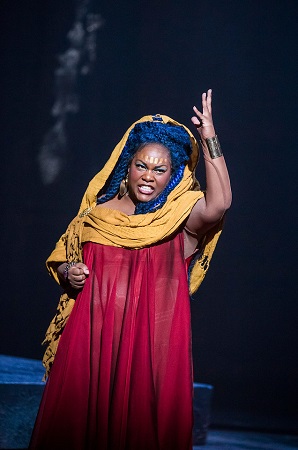 ENO is fortunate in that they have an eponymous Ethiopian princess whose
glorious soprano gleams with an intensity to match Poet’s beams of light.
American Latonia Moore is simply fabulous: she soars above the rest of the
cast – literally and figuratively. When she commenced ‘Ritorna vincitor’,
she made one immediately sit up and listen: for the first time we had
persuasive, genuine human emotion, and as the performance developed she
showed that from the gentlest pianissimo to the plushest
fortissimo she could make us believe unwaveringly in Aida’s devotion,
defiance, despair and dignity. ‘O patria mia’ was infused with strength and
sincerity, and if she seemed a little nervous about the top C that could be
forgiven. In Aida’s duet with Amneris, Moore’s soprano blazed radiantly and
effortlessly.

Gwyn Hughes Jones’s tenor has plenty of ringing vibrancy. His RadamËs is a
plausible soldier and makes a confident entrance, sustaining the final Bb
well in ‘Celeste Aida’. Even more shine at the top might help to convince
us of his passion for Aida and give fervour to his confrontation with
Amneris, but Jones has the stamina for the role and the Tomb Scene intimacy
is moving, the poignancy of the lovers’ short-lived reunion deepened by the
presence of Amneris, watching from above. 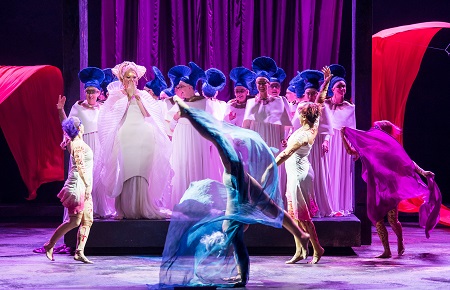 As Amneris, mezzo Michelle DeYoung seemed to be struggling. Certainly, her
Act 1 costume was ‘larger-than-life’ but vocally DeYoung was too ragged and
unfocused to convey the tragic princess’s conflicted emotions. It didn’t
help that some distorted vowels made the clunky English translation even
more cumbersome. De Young’s characterisation was unmodulated and somewhat
superficial, though her voice did relax and begin to bloom in the Judgement
Scene.

Eleanor Dennis was poised and imperious as the High Priestess, and Robert
Winslade Anderson (deputising for the indisposed Brindley Sherratt) and
Matthew Best were more than competent as Ramfis and the (white-suited?)
Egyptian King respectively. Musa Ngqungwana’s Amonasro wasn’t quite
imposing enough; a bit more patriarchal authority was needed.

Whatever misgivings there may be about McDermott’s ‘logic’, if there’s one
reason to see this show, it’s the opportunity to hear Moore in a role she
has sung to great acclaim many times, including at the Met and the ROH, for
her performance confirms her as a lirico spinto of great
distinction.