Romanian soprano Aurelia Florian sings Violetta in all ten performances (through October 17). She is young and pretty, her voice is strong and rich throughout all registers, and her high notes are splendid (she does not take the optional high E flat in the “Sempre libera”). Verdi famously wanted a real woman for this role, a woman who could actually suffer. Mme. Florian does indeed suffer, if as a heroine of opera’s coming verismo. In Verdian terms la Florian’s Violetta is far from the proto-verismo of his delicate Desdemona, hers is more his decisive Lady Macbeth.
Most of all Mme. Florian greatly pleases us as an excellent singer. That she is also a suffering mid 19th century courtesan is less compelling.
Alfredo, the Brazilian tenor Atalla Ayan, is an excellent singer as well. His voice is wonderfully even throughout its registers, its tone more decisive than rich. He offers his arias with a vocal enthusiasm that is infectious, easily projecting his vibrant emotions. 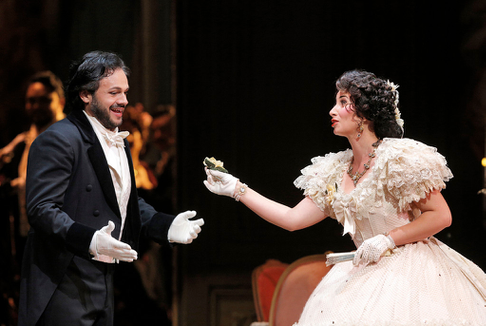 Atalla Ayan as Alfredo, Aurelia Floria as Violetta
In the first act both singers easily found their characters, Violetta seated alone in her grand salon to contemplate her “Ah fors’Ë lui,” then to burst onto her balcony to deliver its antithesis, Alfredo, behind the scene, grandly intoning his ardor.
The second act became difficult, the complex turns of the plot demand subtle development of character and emotion, here the actors were exploiting the fine movement of their voices, leaving the unfolding tragedy to find its own way. The loss of dramatic focus was most evident in the Germont of young Polish baritone Artur Ruci?ski. Mr. Ruci?ski is an extraordinary singer, able to gloriously project text in musical line, providing enormous satisfaction to his listeners. But he did not achieve the warmth and maturity and the deep humanity of this sympathetic, honest man trapped in provincial morality.
The Copley production in this fifth edition staged by Shawna Lucey became clumsy in the gambling scene, the chorus and ballet cumbersome, and the showdown (Alfredo humiliating Violetta) pallid. Without having deepened and exploited the opera’s personalities the death scene read as incidental. 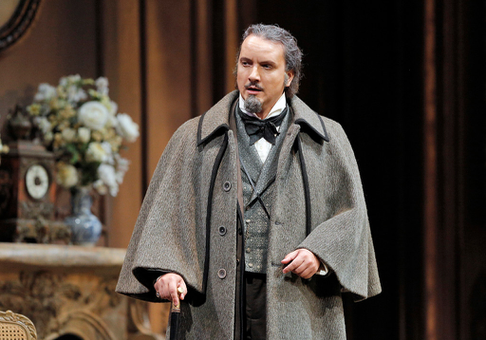 Artur Ruci?ski as Germont
Meanwhile conductor Nicola Luisotti was finding every palpitation of emotion in the score, the strings of the San Francisco Opera orchestra choking with emotion in the overture, the clarinet solo unabashedly sobbing while Violetta writes her note to Alfredo, the enormity of the tragedy welling up in the death scene, the finality of death hammered in the final, magnificent roll of the tympani.
In concert with the truly excellent singing the magnificence of the Luisotti orchestra trapped this evening into inexplicable musical and dramatic frigidity.
As Verdi wished (and was initially denied) the Copley production sets the action in 1852 or so. Verdi wanted the contemporary moment. Of course it is now 2017. Our contemporary moment is of great complexity, and of a breadth far beyond the concerns of Verdi. It is a fascinating question how to stage a timeless work of art in a production that recognizes, respects and exploits the artistic and moral accomplishment of the intervening 150 or so years.
This production marked the first time supertitles were used for La traviata at San Francisco Opera. The supertitles were created by Jerry Sherk (SFO’s then production manager, now legendary). They tell the story simply and easily in the abstract manner of supertitles of that era. It is time to create new supertitles for future productions that echo the rhythms of the phrases as they are sung.
It should be mentioned that sloppy masking in the first act allowed an annoying, blinding light from a stage manager’s desk to escape into the house.
Michael Milenski