Medea in Corinto
(Medea in Corinth, 1813 and much revised over the course of the
next ten years) was Mayr’s best-known opera and remained a repertory staple
for a time even after his death. It has been revived frequently in our own
day, especially in Italy, where audiences can of course follow the plot and
shifting emotions without recourse to supertitles.

Mayr’s opera tells basically the same story that opera lovers know from
Cherubini’s MÈdÈe (a work often performed in a much-altered later
version and in Italian, under the title Medea). But the treatment
of the Medea legend by Mayr and his librettist, the immensely gifted Felice
Romani, is different enough from Cherubini’s that the work has its own
identity and appeal.

American Record Guide
has reviewed three previous CD releases of Mayr’s Medea in Corinto, the best of which, the reviewers agreed, was the studio recording from
Opera Rara, with Jane Eaglen, Yvonne Kenny, Bruce Ford, and Raul Gimenez.
(See reviews by, respectively, Desmond Arthur, September/October 1994;
Charles H. Parsons, March/April 2000; and Ralph V. Lucano, Nov/Dec 2010.)
That recording also included an appendix of additional numbers that were
composed by Mayr for the work and that were either omitted before opening
night or got used in certain later stagings of the work. 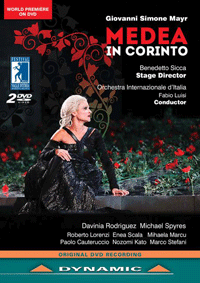 The two other CD recordings that have been reviewed in ARG were
made at live performances in Italy. Both of them are apparently disfigured
by one or more singers who wobble or sing off-pitch. The Myto set features
the vibrant Leyla Gencer in the title role; the Oehms set has Elzbieta
Szmytka (overstretched by the part) and can be heard by anybody with online
Naxos access (e.g., through one’s public library), as indeed can the
recording under review.

The pioneering Vanguard recording (1970) stars the magnetic Marisa
Galvany. Its CD re-release seems to be out of print at the moment, but
excerpts are on YouTube.

In this opera, the princess of Corinth (here called Creusa) was promised to
King Aegeus (Egeo) of Athens, before she shifted her affections to the
heroic Giasone. Egeo has a big and dramatically varied role. Medea is given
a powerful scene with the spirits of hell (reminiscent of a scene in
Cavalli’s Giasone, composed a century and a half earlier).

Romani and Mayr give the chorus multiple occasions to rejoice, reassure,
worry, and be solemn or horrified. (In this new recording they sound fine,
mostly, except for some reason in the scene with Creusa at the beginning of
Act 2.) The orchestra frequently offers colorful interjections: we get
several arias in which a solo instrument (e.g., violin, English horn, even
harp) performs in duet texture with the voice or in alternation with it.

As in many of Rossini’s serious operas, recitatives are accompanied by
orchestra rather than keyboard. The Medea/Giasone duet in Act 1 is a large
four-movement structure of a type that scholars and critics normally call
“Rossinian” and would become normative for Rossini’s successors: Donizetti,
Bellini, and the young Verdi. Vocal lines are quite florid (not least for
Egeo) but often also tuneful or even dance-like, sometimes reminding me of
Donizetti (to come) or of phrases from Mozart’s CosÏ fan tutte and The Magic Flute (some twenty years earlier).

The recording derives from one or more staged performances at the Valle
d’Itria festival in July-August 2015. Inevitably, the performances on the Opera Rara studio
recording are freer of imperfections. In this festival recording we
encounter moments of orchestral unease and some slow wobbling from the
Medea and (worse) the Creusa. The sound quality, generally fine, can get
congested when Davinia Rodriguez (Medea) and Michael Spyres (Giasone), both
intense-voiced, are singing simultaneously. Rodriguez’s lower register is
consistently hooded, sometimes sounding very Callas-like, which may
displease some listeners but, to my ear, aptly indicates Medea’s grim
determination to avenge herself on the lover who abandoned her. Indeed,
Rodriguez seems to me a more convincing Medea than Eaglen was on the Opera
Rara recording, and the chorus of the spirits of hell register more vividly
here in the splendid conjuration scene (“Antica notte”) than on the Opera
Rara recording.

Spyres has now performed or recorded numerous French heroic-tenor roles,
including Rossini’s Arnold and Berlioz’s Cellini. (He sings splendidly on
the new recording of HÈrold’s Le prÈ aux clercs, which I will be
reviewing here soon.) As Giasone he is often utterly admirable, showing
great stamina and presence. But he sometimes strains, at full voice, for
high notes that, in Mayr’s day, would have been sung in falsetto or
half-voice. And, quite unnecessarily, he adds several notes that are higher
than anything written by the composer, and has to lunge for them, making
him sound, at that moment, less than heroic. His coloratura is sometimes
firm, other times ungainly. Still, he sings consistently in tune.

Indeed, all the singers sing in tune. Furthermore, they put the words
across well, which helps us care about the characters’ shifting emotional
states. The renowned Fabio Luisi conducts expertly, blending dramatic
impetus with delicacy and precision. By comparison, David Parry’s
conducting on the Opera Rara recording sometimes feels sluggish and
unvaried.

The booklet essay is enormously detailed about the compositional and
performance history of the work but gives no indication what version is
being heard here and whether any of the numbers differ from the equivalent
ones on previous recordings.

I had no trouble downloading the libretto, but then struggled through some
unidiomatic or even outright erroneous translations. For example, talamo—literally: “chamber”—is the standard libretto-word for
“marriage bed.” It is here translated as “thalamus,” as if the characters
were discussing the function of somebody’s brain. The booklet essay is
similarly disfigured. I suggest that Dynamic hire better translators,
perhaps ones who are native English-speakers.


A DVD of this same performance is also commercially available and has
been uploaded to YouTube. One can also purchase a DVD of

a 2010 staged performance from Munich, with what—to judge by excerpts
on YouTube—is a splendid cast (Medea: Nadja Michael; Giasone: Ramon
Vargas; Egeo: Alek Shrader). Watching either of the videos. or listening to the CD set under review,
would be the best way to get to know Mayr’s famous opera.

The Opera Rara recording, despite much first-rate singing (e.g., from
Bruce Ford as Giasone), now slides down to second-best. Still, it
remains indispensable for people who wish to compare Mayr’s various
revisions, cuts, and insertions. It is currently available only as a
digital MP3 download (in any of three formats), not as a CD set. It has
also been uploaded entire (and also as separate tracks) to YouTube.

and appears here by kind permission.

is emeritus professor of musicology at the University of Rochester’s
Eastman School of Music. Six of his articles have won the ASCAP-Deems
Taylor Award for excellence in writing about music. His most recent two
books are

Music and the Exotic from the Renaissance to Mozart

(both Cambridge University Press). The first is now available in paperback,
and the second soon will be (and is also available as an e-book).