Even before curtain-up, the gently falling snow was sparkling against the
black night sky of late-nineteenth century Paris. This is a production
which strives to balance ‘realism’ with romance: exquisite design details
create verisimilitude, while the visible mechanisms of theatre serve to
remind us that we are voyeurs. Occasionally, there are ‘slippages’, as when
the candles ‘go out’ in Act 1 but the interior set remains flooded in light
as MimÏ and Rodolpho scrabble around ‘in the dark’ looking for her keys.
But, when the tables of the plush CafÈ Momus push the
front-facing diners to the front of the stage, or the duets of Act 3 are
repeatedly directed ‘at us’ – through the fourth wall – a distance is
established which creates tenderness and poignancy. 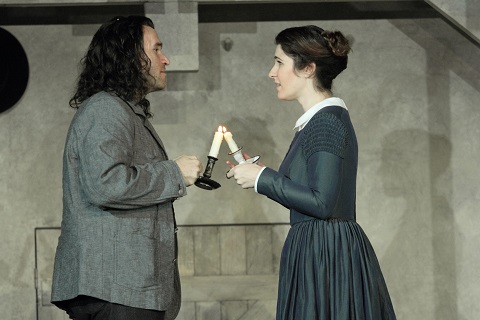 Jones tells the story straight. Act 1 takes us into the eaves of the
bohemians’ garret – brutally cross-sectioned in its barren bleakness: a
paint-splattered chair and tiny three-legged stool, a cheap violin case,
some paint pots and brushes, a brazier which will be fuelled by Rodolfo’s
pulped play-script. A ladder protrudes through the skylight which admits
the fairy-tale conical moon-beam conjured by lighting designer Mimi Jordan
Sherin.

The attic atelier swivels and recedes but remains a shadowy presence in
Acts 2 and 3, as Laing whisks us – and the vibrantly attired Christmas Eve
revellers – through the glittering arcades of the Quartier Latin
to the up-market CafÈ Momus, and finally to the
unwelcoming toll gate at the BarriËre d’Enfer, through which
pedlars enter the city and beside which we witness the contrasting couples’
squabbles and sweet-talk, as winter presages spring. 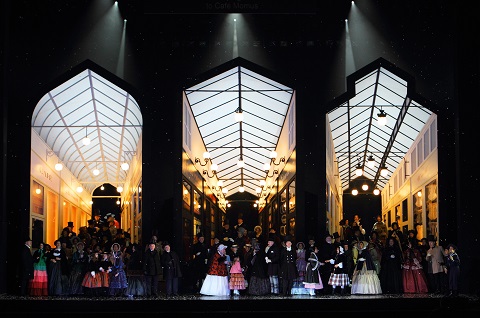 Some of Jones’ and Laing’s scene shifts have the beguiling enchantment of a
Christmas ballet. Money has obviously been lavished on Act 2, and the
dazzling lights of the triplet of arcades lure the merrymakers into the parfumerie, cave de vin and Salon de sociÈtÈ,
before swivelling to make way for the stuccoed-ceiling CafÈ –
down-at-heel would-be artists certainly couldn’t afford the cover charge
let alone the champagne, so it’s no surprise Alcindoro has to pick up the
tab. Later, the CafÈ itself divides and diverges, casting its
diners into the night street, where lamplight sentinels illuminate the
scarlet splendour of a passing military band.

Act 3’s bare street and isolated tatty tavern emphasises the gaping expanse
between love and fulfilment, hope and reality. This is confirmed at the
close of the act, when the tavern slides almost imperceptibly across the
stage into the blackness, and reinforced by the stab of green light which
accompanies the brutal closing chords of Act 3. Act 4 takes us back to the
austere attic, where the horse-play has a desperate air as the boys
graffiti the beams and bare walls ‡ la Picasso. The light now
seems, painfully and ironically, to shine even brighter. But, the shadows
cast by the attic beams darken, creating a criss-crossing chiaroscuro which
hides the mourners lined against the rear wall, while the dying MimÏ is
thrust to the fore, into the light. 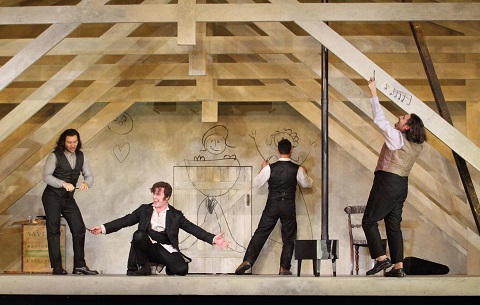 Though she was dressed like Jane Eyre in an ugly grey frock, and later
given a hideous pink bonnet by Rodolfo, Australian soprano Nicole Car was
an impetuous MimÏ – her bounds of energy matched by bursts of lyricism and
vocal bloom. She phrased sensitively and displayed a pure, even tone across
the registers. Perhaps a little more variety of vocal colour might have
helped to fill out the character, and the same was true for Michael
Fabiano’s Rodolfo, who seemed oddly self-absorbed at times – the prone MimÏ
got a kick rather than a glass of water in Act 1, and this Rodolfo was
keener to be consoled by Marcello than to cradle the dying girl in his
arms. Fabiano’s tenor was strong and true – ‘Che gelida manina’ won cheers
and applause – but needed a little more softness and flexibility to
convince that Rodolfo’s heart ruled his head. The ‘supporting’ pair were
superb. Mariusz Kwiecie? was spared the straggly wigs inflicted on the
other men and his characterisation of Marcello also seemed to have more
freedom and complexity; his Act 3 duet with MimÏ was wonderfully moving.
Simona Mihai will take over as MimÏ later in the run but here she was a
show-stealing Musetta, climbing sassily onto the tables to deliver her
risquÈ waltz – during which she removed her silk knickers to taunt the
sulking Marcello – but showing genuine care and compassion in the final
act. 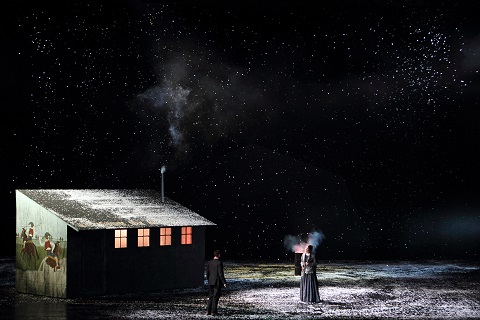 The rest of the cast sang well but needed more direction from Jones to
really make their mark. Florian Sempey’s Schaunard and Luca Tittoto’s
Colline sometimes seemed a bit ‘lost’, disappearing into the recesses of
the garret, and the boisterous larking about with herring and crayons in
Act 4 felt somewhat forced. Wyn Pencarreg’s Alcindoro was a sober figure
and Act 2 was thus shorn of some of its fun. And, I must have blinked as I
missed the toy-seller Parpignol, though the children of Tiffin School
chanted and clamoured brightly.

Antonio Pappano swept things along with characteristic vigour and vitesse but while the bursts of orchestral colour were certainly
impassioned and thrilling, after a while it felt a bit too ‘full-on’ and it
would have been nice to have time to take in some of the details and
subtleties.

However, despite a few small quibbles I enjoyed this performance immensely.
John Copley’s La bohËme, which has finally been retired, had an
astonishingly long life and I wouldn’t be surprised if Jones’ production
isn’t similarly enduring.