Full credit, then, to director Olivia Fuchs, conductor Sian Edwards and the
Birmingham Contemporary Music Group for this imaginative, thoughtfully
programmed and highly engaging contextualisation of the work – one which
gave us not only eight songs for a mad King, but also the songs of the deluded monarch: the music that rings and rages through his
mind, heart and soul; real or imagined.

Librettist Randolph Stow explains in the score of Eight Songs that
the text was inspired by ‘a miniature mechanical organ playing eight tunes,
once the property of George III’. A scrap of paper sold with the organ
stated: ‘This organ was George the third for Birds to sing.’ Stow
describes how disturbing it was to imagine the King ‘in his purple flannel
dressing-gown and ermine night-cap, struggling to teach birds to make the
music which he could so rarely torture out of his flute and harpsichord. Or
trying to sing with them, in that ravaged voice, made almost inhuman by
day-long soliloquies’.

Davies’ score incorporates fragments and allusions to early
eighteenth-century and mid-twentieth century popular songs, and so the
BCMG’s programme comprised music from the same periods, and contrasted the
freedom offered to the soul by the sounds of nature with the constriction
and suffering resulting from disruptive human relationships and illness.

Throughout the programme, our Mad King – baritone Marcus Farnsworth – was
present at the foot of the concert platform of Wilton’s Music Hall.
Strait-jacketed, emitting occasional twitches and moans, he was by turns
delighted, distracted and distressed by the sounds he heard. Alone,
vulnerable and exposed, this lonely figure seemed to charge us with the
same voyeuristic pleasure that his contemporaries took in his fall from
grace.

The extended narrative was presented as a continuity, although some
disruption and interruption resulted from necessary re-arrangements of the
stage. These slight hiatuses, though, did not detract from either the
persuasive wholeness and striking intensity of the concept, or the
skilfulness of its execution.

Book-ending and infiltrating the ‘prelude’ to Eight Songs – which
begins with George in his aviary attempting to teach his birds to sing –
was Alaskan-based John Luther Adams’ multi-layered soundscape, songbirds. Perched in the gallery, percussionists Julian
Warburton and Steve Gibson provided percussive cracks and rumbles to
accompany Tony Robb’s piccolo trills and flutters.

Adams’ work was composed in the 1970s, at which time Messiaen had of course
been taking inspiration from birdsong for several decades. Adams has noted
that with ‘the self-consciousness of the self-styled young iconoclast’ he
deliberately set out to eschew Messiaen’s influence, and we were able to
judge for ourselves, for an example of the latter’s own orni-morphism
followed. Le merle noir (The Blackbird), composed in 1951
for the Paris Conservatory, explores the way the bird’s song can be not
simply portrayed or mimicked but actually grounded in the mechanism and
implementation of an instrument itself. Pianist Mark Knoop exploited the
composer’s divergent registers to establish the tremulous mood at the
start, before flautist Marie-Christine Zupancic delicately crafted the
diverse detail of the bird’s ‘cadenzas’.

Though our King had seemed entranced by Adams’ ‘Morningfieldsong’, during Le merle noir his head was bowed and clutched; a figure emerged
and seated herself at the front of the stage, wrapping herself in Wilton’s
generous red velvet curtain – a figure who, judging from her purple lace,
frizzed hair and kohled eyes, had wandered straight from Gay’s Beggar’s Opera. Soprano Jennifer France’s subsequent rendition of
the anonymous ballad ‘Mad Maudlin’s Search for Her Tom O’Bedlam’ was highly
theatrical. Accompanied by Tom McKinney’s paradoxically elegant guitar,
France’s soprano rolled richly around the text. In fact, the latter is
almost surreal in its imagery and fragmentation: what are we to make of Mad
Maudlin’s claim to have ‘cut mince piece from children’s thighs’, ‘boiled
ten thousand harlots’ in a cauldron and ‘beaten The Man in the Moon to
powder’. 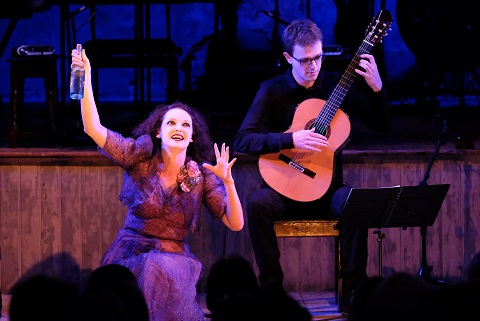 It certainly added to the disorientating strangeness, and the sense of
‘oddness’ continued in Rebecca Saunders’ Molly’s Song 3 – shades of crimson which adds four radio sets to its ensemble of
alto flute, viola and steel-stringed acoustic guitar. The music is derived
from Molly Bloom’s inner monologue at the close of Joyce’s Ulysses
; in an explanatory note in the score, Saunders explains that Molly’s Song 3 ‘seeks to sustain a musical energy strong enough to
with stand the assaults of a succession of destructive events’. It’s
certainly fraught and dramatic, the viola player (Christopher Yates) in
particular being asked to produce an astonishing array of timbres.

Some soothing balm was administered by France’s charming rendition of
Alminera’s aria ‘Augelletti che cantate’ from Handel’s Rinaldo (in
1711 Handel arranged for the release of real birds in the theatre at this
point in the opera). She traced a mellifluous line – convincing the King
that he had re-gained his Queen – while the flute swept through its
virtuosic song.

But, the picture of pastoral peace and emotional reunion was but a cruel
illusion. In the closing stanza, France confined the King to his
strait-jacket once more. The musicians took their places for Eight Songs, for Davies and Stow intended that the players should
be visually present performing music which is both diegetic and
non-diegetic, and an exteriorisation of the King’s neuroses.

Much of the work requires the players to improvise from graphic notation
and the synchronisation and precision of the BCMG was remarkable, always
confident and taut as they moved between pointed unisons and strident
dissonances, but bursting with energy too. Even the ‘out-of-phase’ rhythmic
disintegrations and fragmentations sound ‘just right’, as the players
depicted the dissolution of the King’s mind. In the third song, ‘The Lady –in-Waiting (Miss Musgrave’s Fancy), King and flute duetted in
chirrups and tweets with playfulness and freedom. In the climactic ‘Country
Dance (Scotch Bonnet)’, after the piano’s opening cocktail bar ‘smooch’,
the piano and bass drum hammered terrifyingly as the King grabbed Alexandra
Woods’ violin and violently smashed it to smithereens.

The role of the Mad King encompasses more than four octaves and asks the
performer to deliver a range of multi-phonics. Farnsworth’s groans,
bellows, screams, whispers, gargled phonetic gestures, Sprechstimme and,
occasionally, song vividly conveyed the King’s torment. After a brief
disappearance, he returned for the ‘Country Dance’, his long-johns and
night-shirt now decorated with red feather boa, his lips rouged, for a
flamboyant melisma, ‘Comfort Ye’ – a sardonic allusion to Handel’s Messiah, a particular favourite of George III’s – before
descending to a disturbing, rasping ‘my people’. Flamboyance was followed
by frenzied wrath when the King, unable to join in with the musicians,
exploded with frustration; the shattered, forever to be silent violin was a
poignant embodiment of his own impotence and irrelevance.

Farnsworth recited the ‘Review’ of his regnum with dignity, but he was a
haunting presence, his majesty already obliterated and forgotten. He
marched around and out of the Wilton’s auditorium to a merciless, whipped
drum-beat – punished, disregarded, elapsed. The empty stage was a reminder
of the ‘gap’ between the King’s powerful and pitiful selves, a ‘gap’ into
which the King, his two ‘selves’ estranged, plunged into nothingness.