In fact, Brunel’s Grade II* listed Grand Entrance Hall has rung with the
sounds of serenades before: as Brunel Museum director Robert Hulse explained during his interval talk, it was
the venue for the world’s first underground concert party in 1827. Though
its engineering was both remarkable and rock-solid, the Tunnel’s finances
were more ropey: the money ran out before the ramps needed for horse-drawn
freight had been built and when it finally opened in 1843 it was accessible
only to pedestrians.

Ever the showman – and not deterred by the fact that he himself had
almost drowned in the shaft when a collapse during construction
resulted in a flood that killed six men – Brunel turned the Tunnel into
a sort of underground pleasure-garden. Acrobats and singers entertained
the millions of Londoners who paid their penny to enter the first ever
road tunnel under a river – it became known as the ‘Eighth Wonder of
the World’ – and wander through the bazaars, fun fairs and food stalls. 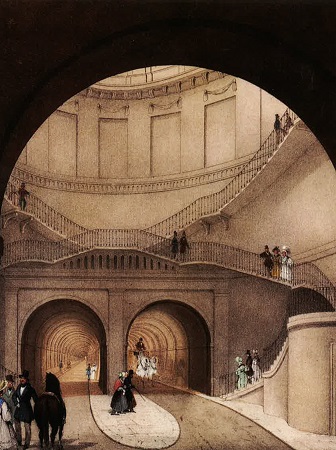 Then the steam trains came. The Tunnel was purchased in September 1865 by
the East London Railway Company and that was the end of the subterranean
show business. Until, in 2016, 190 years after construction began, the
fitting of a free-standing, cantilevered staircase made the ‘sinking’ shaft
accessible to the public once again and London gained a new underground
performance space.

On this occasion, The Opera Box had teamed up with The Music Troupe to
perform two short operas, as part of the Totally Thames Festival 2017.
As music director Edward Lambert seated himself at the piano, I
reflected that it must have taken ingenuity of which Brunel himself
would have been proud to get the Bechstein down the ‘ship-in-a-bottle’
staircase. But, the new concert space certainly provided Lambert with a
fittingly eerie performance space for his new opera, The Oval Portrait, the prose libretto of which is drawn from a short story by Edgar Allan Poe.

‘The Oval Portrait’ is one of Poe’s shortest stories, barely two pages
long. A wounded man, the Narrator, seeks shelter in a ruined chateau
where he ponders the strange paintings adorning the walls of his room.
He is particularly captivated by the astonishing verisimilitude of one
portrait, in an oval-shaped frame, depicting a beautiful young girl on
the threshold of womanhood. He finds a book under his pillow which
tells him that the young bride in the picture was the wife of the
painter; she was life-loving, jealous of his art; he was obsessed with
capturing her likeness, neglectful of his living wife. Dispirited, she
weakened but ‘smiled on and still on’, ever eager to please her
husband. When he finally finished the portrait, the painter exclaimed,
“This is indeed Life itself!” He turned to his wife, only to find that
she had died.

Lambert’s twenty-minute opera has less to say about the tale’s
philosophical intimations on the complex relationship between art and
life, and is a simpler, cautionary tale. Poe does not give us a ‘moral’
at the close; his story ends abruptly, with the book’s declaration that
the painted “turned suddenly to regard his beloved:- She was dead!” Lambert ignores
Poe’s essential ambiguity, and gives us an ‘afterword’, the first time the
voices of the Narrator and The Book – comprising a chorus of four singers –
are overlain:

Narrator: And, as I read how the last brush stroke and the list tint had
taken away the life of the lade of the oval portrait …

The Book: So let it be now that you who have read these words/ And have
gazed on the portrait of the lady shall also die.

So, instead of a reflection on the dangers of aestheticism we have a more
straightforward gothic tale. But, the five singers of The Opera Box told
this tale effectively. Samuel Pantcheff’s Narrator was intensely, vividly
alert. He swept through the lyrical vocal lines with strong
characterisation and his diction was impressively clear given the extremely
resonant acoustic. In the manner of a Greek chorus, attired in black, ‘The
Book’ processed in, smeared their faces with white streaks and then took
their places at four music stands to recite the book’s text. 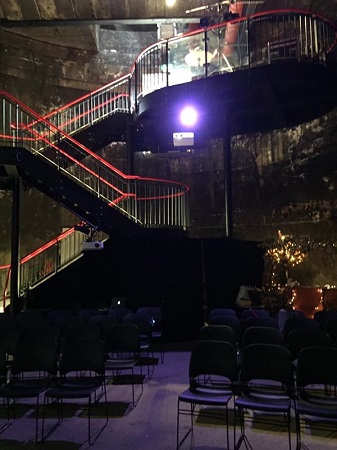 The venue helpfully aided both blend and projection, so it’s difficult to
comment on the ‘quality’ of the singing, but the intonation was secure and
the delivery compellingly urgent. The Book’s polyphonic opening – rather
like a Renaissance motet – was controlled and the entries clear. The
homophonic repetitions emphasising the painter’s neglect of his young bride
as she sat in the dark turret for many weeks while his gaze was fixed on
his easel – he did not see that “the light in that lone turret/ Withered
the health and spirits of his bride who pined visibly to all but him.” –
became increasingly disturbing, and confirmed Lambert’s effective
text-setting.

Lambert’s piano reduction (the work is scored for piano, clarinet, bass
clarinet, viola and cello) was evocative, largely comprising extended
episodes of contrasting ‘patterns’ – anything from neoclassical Alberti
bass-type figuration to Nyman-esque repetitions. At times, the
accompaniment seemed rather dense in texture, and the rapid, pounding
chords resonated rather too loudly, competing with the rumbles of
London Overground trains overhead and leading the singers to push their
voices rather too forcefully. I don’t know how much time the company
had to rehearsal in the performance space, but a little more
consideration might have been given to the effect of the
extraordinarily generous acoustic, for the overall sound-mass was
occasionally overwhelming.

The same was true for the subsequent performance of Mozart’s
Der Schauspieldirektor
(The Impresario), in which Lambert’s enthusiastic overture established
a dynamic platform from which it was difficult for the singers to
retreat, although later arias had greater lucidity. The work was
commissioned by Emperor Joseph II to entertain the guests attending a
private luncheon in the orangery of Schˆnbrunn Palace in Vienna, in
1786. A public opera competition was held which both Salieri and Mozart
presented one-act operas which took an ironic swipe at the world of
opera. Salieri’s opera buffa Prima la musica e poi le parole, which was full of jibes about Mozart’s frequent collaborator Da
Ponte, triumphed over Mozart’s
Singspiel (the composer called it a ‘comedy with music’).

A parody on the professional and personal vanity of singers and other
theatre-folk,
Der Schauspieldirektor (given here in a new translation by director Mark Burns, which teases
out some topical tropes) presents a theatre director, Mr Frank
(Pantcheff), who is having troubled raising funds to engage some new
actors. Mr Phil Anthropist (Daniel Joy) promises to help but only if
his lover, Madame Heartfelt (Jennifer Witton), can be the prima donna.
Along come Miss Silverklang (Elizabeth Karani) and Mr Buff (James
Schouten), to vaunt their vocal wares. Exasperated by their egos and
eccentricities, Mr Frank is ready to give up but agrees that the
audience should decide who should be hired.

Witton coped well with the diva’s challenging runs and hit the
stratospheric heights with sparkle, but the acoustic magnified every
rough edge on the way up: less really would have been more – the venue
would have done all the work. Karani, her fitness-freak challenger, was
her match in their vocal duels, displaying lots of vocal colour and
evenness across the registers. Exuberantly attired in mis-matched pink,
yellow and scarlet Daniel Joy was a self-serving, self-absorbed
‘philanthropist’ whose appealing tenor was complemented by dramatic
nous. I’m not sure I’d describe James Schouten as a buffo bass, but his
Mr Buff had plenty of puff and bluff. Pantcheff provided strong focus
and presence for the rest of the cast, and his extended stretches of
dialogue were fluent and engaging.

There were plentiful gags about singers’ status, salaries and
self-love, as well as the relevance of opera in the modern world. But,
while Burns can turn out a neat triple-rhyme and tap fruitfully into a
contemporary lexicon, his direction made less of an impact. Arias
tended to be delivered from the centre of the stage-space, with the
rest of the cast manically mincing, arm-waving and engaging in
histrionics behind, with little meaningful interaction between them.
There was potential here for some really sharp satire and tightly
focused drama but, in the event, we had horse-play and lightweight
cattiness.

Moreover, the company need to give some thought to what might be termed
professional procedures. After Mr Hulse’s interesting but extended
mid-way presentation, I assumed that we were ready to get on with the
show, especially as we were invited at its conclusion to applaud and
welcome back The Opera Box. In the event, another 25 minutes passed
before things got underway, during which time a stage-hand had wandered
about with some chairs and seemed to be preparing a new set, but got
distracted by some friends in the audience. It’s all very well to
cultivate a ‘friends and family’ ambience but, given that the costume
changes must have taken just a few minutes, when barely 60 minutes of
music extends to an event lasting nearly two hours you are in danger of
stretching the audience’s patience.

That said, the talented young cast sang and hammed valiantly. The Opera
Box put on a good show which was welcomed by an appreciative audience.