Forster’s short story – which he described in another letter (to Florence
Barger) as ‘violent and wholly unpublishable’ – seems to bring together the
concerns that the writer explored in two of his novels, A Passage to India and Maurice. It tells of a young
English missionary, Paul Pinmay, who travels into the wilderness to attempt
to convert a powerful tribe leader, Vithobai, who has so far resisted the
earnest Edwardians’ proselytising. When he preaches to Vithobai of Christ’s
love, in what is to be a tragic confusion of the literal and metaphoric the
native chief wants to hear more about ‘“this god whose name is Love”’.
Seeing ‘how intelligent the boy was and how handsome, and determining to
win him there’, Paul plants a kiss on Vithobai’s forehead and ‘drew him to
Abraham’s bosom’: ‘And Vithobai had lain in gladly – too gladly and too
long – and had extinguished the lamp. And God alone saw them after that.’

When Pinmay returns, he seems to have failed in his mission but a message
arrives that Vithobai and his entire people have embraced Christianity.
Pinmay’s ‘reward’ is to be appointed by the Bishop to become the minister
of the district. When Vithobai, now baptised as Barnabus, visits Pinmay and
asks him to ‘“come to Christ”’, the Englishman is torn by conflicting
feelings of guilt, attraction and repulsion. He forbids Vithobai ever to
speak of what happened that night or to seek his company, but when the
chief seems about to turn back to his ‘false gods’, Pinmay prevaricates:
‘“I said Never speak, not that I would never come.”’

Innocent and trusting, Vithobai waits. Five years pass during which both he
and Pinmay marry, but when the chief offers Pinmay a dog-cart as a wedding
gift and invites him again to come to Christ, this time the missionary is
adamant: he will never come. During the rest of Pinmay’s ten-year term, the
colonists bring exploitation and disease; the chief loses his wealth, his
land and his health. When Pinmay learns that Vithobai is dying, he
determines to visit him once more, to explain the chief’s theological
misunderstanding, so that they might forgive each other and repent before
Vithobai enters ‘the life to come’. Though initially disillusioned – ‘“I am
pure I am evil I am pure I am foul … What difference does it make now?”’ –
Vithobai becomes assured that there really is life after death. He takes a
knife and stabs Paul – ‘“I served you for ten years”, he thought, “and your
yoke was hard, but mine will be harder and you shall serve me now for ever
and ever.”’ – before himself succumbing to the life to come. 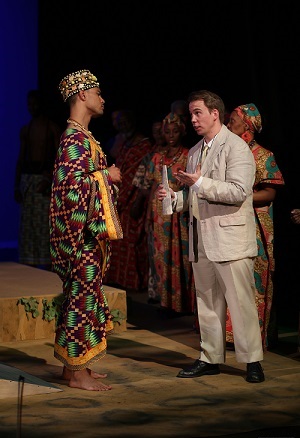 Whereas Forster’s short story proceeds in four taut scenes – Night,
Evening, Day, Morning – Fry tells the tale chronologically. Forster begins
with the fateful nocturnal communion – ‘Love had been born somewhere in the
forest’ – and so the reader’s knowledge colours their response to the
ensuing events, whereas Fry, to create a compelling dramatic structure,
shifts the sermon which initiates the sexual contact between the two men to
the end of the first of two Acts. In the fictional account, we are
repeatedly reminded of the passing of the ten-year span of the story, but
the events seem more compressed in the opera, fulfilling the need for
dramatic intensity.

The story’s background figures – the other missionaries, Paul’s wife and
brother-in-law, the tribespeople – are expanded by Fry to provide the
requisite cast of characters, vocal variety and a role for the community
chorus – although inevitably some of the characterisation is a little thin,
as Forster has little concern with these peripheral figures.

Understandably, too, there can be none of Forster’s narrative complexity
and irony in the opera; from the start of the story we are made aware that Paul
has been sent ‘partly to discover his own limitations’. We see his
distress and shame, but also his repression, restrictiveness and stridency,
as ‘he who had been wont to lay such stress on the Gospel teaching, on
love, kindness … now reacted with violence and treated the new converts and
even Barnabus himself with the gloomy severity of the Old Law’.

Much of Forster’s narrative is focalised through Paul’s consciousness.
Pinmay’s condescension towards those ‘“so unlike ourselves”’ is implicitly
criticised as is his hypocrisy when he uses his power to gain an ascendancy
‘which it was politic to develop’ over Barnabus who ‘respected him, and
would not willingly do harm – had even an affection for him, loathsome as
the idea might seem’. And, we condemn his cowardice: he dares not explain
Vithobai’s error and call a ‘fellow sinner to repent’, for such an action
will force him to acknowledge his own need for God’s forgiveness.

Lacking these narrative insights, we perhaps judge Fry’s Pinmay less
harshly; the focus is on his inner schisms rather than the conflict between
progressive and restrictive interpretations of scripture, although Forster
too makes it clear at the end of his tale that both the Englishman and the
native are victims.

Surrey Opera’s staging is direct and moving. Director/designer Jonathan
Butcher (who also conducts) and lighting designer Alan Bishop skilfully
evoke the discomforting distance between Edwardian conformity and a native
‘otherness’, using a simple set (realised by Jill Wilson) which emphasises
contrasts, and effective symbols. The stark blue backdrop evokes both the
strong, pure heat of this foreign land and a sense of ‘exposure’, to the
sun’s rays and to an innocence which is, paradoxically, dangerous. A
cross-shaped platform on stage raises an altar and a church porch bearing
the words, ‘God is Love’, while benches to the fore are populated by a
segregated congregation, natives on one side, Edwardians removed from those
they consider their spiritual inferiors. When Pinmay becomes more reproving
of the natives, we have simply a bare cross. African masks indicate
Vithobai’s village.

Strong injections of coloured light deftly suggest feeling; costumes are
fairly conventional – flowered robes and dresses for Vithobai’s tribe,
clerical attire and business suits for the colonials – but serve their
purpose well. Pinmay’s change from compassionate missionary to more hostile
oppressor is indicated by the white suit that replaces his vestments in Act
2. Vithobai’s authority and exoticism is revealed by his strong,
bare-footed stride, his colourful sarongs and the elaborate mask which is
removed when he submits to Pinmay’s theological instruction.

Louis Mander’s score is attractive and interesting. He writes
sympathetically for the voices – I could hear every word of the text –
using quite sparse but imaginative textures which make copious use of
string pizzicato and harp, and the score offers beguiling melodies for the woodwind.
There are no superficial musical exoticisms but timpani, percussion,
celeste and harmonium conjure strongly defined worlds. Butcher ensured that
these textures were precise and lucid, and his orchestra played very well
for him.

The production is superbly cast. Martin Lindau showed us every atom of
Pinmay’s inner conflict – his earnestness, his disingenuousness, his
cruelty, his suffering – and conveyed pomposity and pathos in equal measure
and with real impact. The Swedish tenor has just the right touch of ardency
and crafted focused, well-phrased melodies. Perhaps there was a little too
much melodrama at the start of Act 2, when Pinmay fell to the floor and
desperately gestured for his fellow churchmen to depart when they bring
news of Vithobai’s conversion; but, then, there is melodrama in Forster’s
account too, when Pinmay awakens from his encounter and hurls the scarlet
flowers of love with which the chief has bestrewn them in the stream before
rushing out to retrieve them, ‘in an agony of grotesque remorse’; or when
he ‘scuttled back for his pistol. “Only one end to this,” he thought.’
Pinmay’s pain and weakness was laid bare by Lindau: “Oh, what have I
done?”, the missionary sobbed, without dignity.

Lindau’s duets with Themba Mvula’s Vithobai were powerfully expressive of
profound emotions and crises. Mvula is every inch Forster’s ‘gracious and
bare-limbed boy’ in sarong or nakedness, and looked fittingly awkward and
diminished, stripped of his mystery, in Act 2, appearing just as Forster
wryly describes, ‘a dusky youth in western clothes … looking like a
waiter’. Mvula has a natural grace that is complemented by a rich and
appealing baritone. The sexual encounter between the two men was staged in
a manner which was poetic, powerful and true. In Act 2, when Pinmay took
the chief aside to advise him that he will explain subsequently how the
chief is in error, the ‘frozen’ cast and striking lighting made time stand
still, and emphasised the poignancy of Vithobai’s misperception and
bewilderment.

As missionary nurse Verily Romily, Pinmay’s wife, mezzo soprano Hannah
Poulson provided a welcome vocal diversity in Act 2, her full, rich tone
suggesting sincerity. James Schouten’s high baritone conveyed
mine-contractor Ernest Romily’s haughty confidence, although the effects of
colonialism and imperialism were less cynically presented than in Forster’s
tale. Forster’s narrator stresses the disease and poverty which the
colonisers bring along with their ‘civilisation’: when Vithobai makes
Pinmay a makes gift of a horse and cart, Pinmay avers that is too expensive
a wedding present and the narrator explains, ‘For the chief was no longer
wealthy; in the sudden advent of civilisation he had chanced to lose much
of his land.’ In the opera, this exploitation was represented by some mimed
mining at the rear of the stage, and a few canes and straps.

Jonathan Kennedy acted well as Reverend Tregold although occasionally he
pushed his baritone a little hard, perhaps to suggests the churchman’s
unforgiving orthodoxy and insensitivity. The minor roles were very
competently taken by Jolyon Joy (Ronald, a missionary), Denver Martin Smith
and Bobby Jeffrey (Head Tribesmen) and Tim Baldwin and Robert Trainer (Head
Missionaries), creating a convincing milieu. The community chorus were a
little self-conscious in the opening scene as the different social groups
joined together for a church service – though perhaps that was
appropriately authentic! They grew in ease and confidence, and when
Vithobai was accepted into the Christian faith, they blazed in powerful,
well-tuned unison.

In a letter to Sassoon, Forster wrote of a planned but abandoned ending for
‘The Life to Come’: ‘I wish the story could have another ending, but
however much skill and passion I put into it, it would never have satisfied
you. I tried another chapter, it is true, in the forests of the Underworld
“where all the trees that have been cut down on earth take root again and
grow forever” and the hut has been rebuilt on an enormous scale. The dead
come crashing down through the foliage, in an infernal embrace.

‘Pinmay prays to his God who appears on high through a rift in the leaves,
and pities him but can do nothing. “It is very unfortunate” says God: “if
he had died first you would have taken him to your heaven, but he has taken
you to his instead. I am very sorry, oh good and faithful servant, but I
cannot do anything.” The leaves close, and Pinmay enters Eternity as a
slave, while Vithobai reigns with his peers.’

However, Forster viewed this ending to be ‘A gloomy prospect you see –
except for Vithobai, who has won the odd trick’. Instead, we are left with
an ending which is frustrating, painful and inevitable. As Vithobai says,
‘“I forgive you, I do not forgive, both are the same.”’ Mander, Fry and
Surrey Opera make us understand and feel the depth of this tragedy.

Louis Mander: The Life to Come (libretto by Stephen Fry, after
E.M. Forster)