last year, I admired the visual beauty of Joanna Parker’s set designs but
lamented the lack of genuine human comedy. It’s interesting, 18 months on,
to see how and to what extent one’s memories have been preserved, and
whether a different venue and cast can produce a fresh response. My first
impression was that the smaller dimensions of the Marlowe Theatre stage
brought about a more engaging intimacy and also prevented excessive
gag-spinning. As Count Almaviva prepared to storm Rosina’s heart with a
stylish serenade, the antics of Fiorello’s guitar-band and the three
extravagantly costumed supernumeraries who facilitate the Count’s
chair-by-chair advance on the flower-bedecked balcony of the beloved’s
boudoir, seemed less fussy and distracting – the faux auditioning and
‘tuning up’ was less cumbersome, the comic antics more subdued but focused.
Moreover, from my elevated vantage point in the Circle, I could enjoy the
decorative floor patterns which reflect the elaborate wall designs and add
to the general air of luxurious ease.

Subsequently, the trio of ‘extras’ swapped their extravagant theatrical
masks and head-pieces for every-day overalls and involved themselves in the
comic carryings-on without becoming overly intrusive. The harpsichords that
they originally carted to and fro, at times distracting from the ‘business’
of the arias, persist, and their presence/function remains a mystery; but
there are fewer of them. The first ribbon-bedecked keyboard imported into
Bartolo’s house is supplemented by a second during the Act 1 finale – its
conveyance and disassembly contributes to the general inanity – and
complemented in the closing moments of the Act by a third which descends
from the heavens and pins down the bewildered Bartolo. But, this is a
veritable sparsity of keyboards compared to the riot of winging, swinging,
upside-down instruments which populated Bartolo’s house last time around. 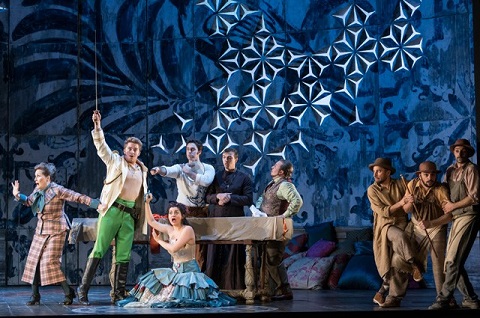 Aside from Adam Marsden, a member of the Glyndebourne Chorus, who
competently reprises the role of the Officer, Janis Kelly is the only
member of the original cast to repeat her role. Once again, she gives a
masterclass in comic judgement, as Berta flits charmingly between staid
disapproval and self-indulgent caprice, joining Rosina in a flighty
fandango and reliving the amorous escapades of her youth in an Act 2 aria
in which her memories are given fresh impetus by the chivalrous aid of the
supernumeraries who take time off from furniture-removing to sashay with
the tartan-suited dame. 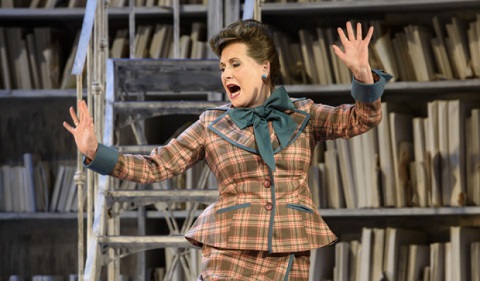 The ‘in-jokes’ are out; so, whereas last time round Act 2 opened in the
Library with Bartolo retreating beneath the table to comfort himself with a
picnic hamper – in imitation of the chuckling Glyndebourne patrons who’d
just ‘enjoyed’ a down-pour disrupted long interval – now he had only a
bottle of whiskey for company; and, this was quickly filched by the
opportunistic men-about-the-house, ‘waking’ from their shut-eye when the
boss’s eye was detained elsewhere.

The cast sing beguilingly but are not all equally commanding in dramatic
terms. Jack Swanson is a youthful Count – indeed his fresh-faced innocence
seems far too unworldly and pure to attract the headstrong Rosina’s
attention – and while he sings accurately and with a clean tone, despite
his glamorous floor-length silver coat Swanson doesn’t yet have the vocal
swagger or sophistication to convey Almaviva’s guile and allure. He can
essay romantic dreaminess in the quieter phrases of ‘Ecco, ridente in
cielo’ but some of the phrasing lacks shapeliness. Moreover, he is woefully
undirected during the disguise episodes. As Figaro, Tobias Greenhalgh
similarly sings with youthful litheness but lacks sufficient dramatic
weight to stamp his dominance on the intrigue. Last time round, Bjˆrn
B¸rger engaged in some wry flirtation with Danielle de Niese’s knowing
Rosina, but Greenhalgh’s half-hearted hip-bumping in ‘Dunque io son … tu
non m’inganni?’ seemed naively harmless in comparison. Both young Americans
sing well, but lack vigour and presence. 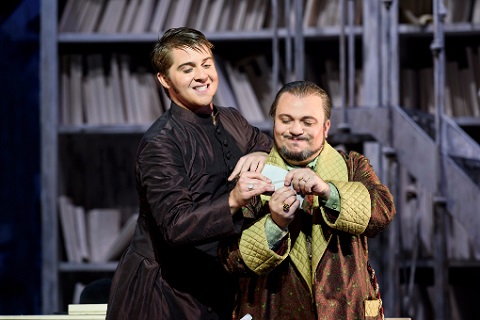 Marco Filippo Romano is, however, excellent as a cantankerous Bartolo,
eschewing buffo hyperbole for credible indignation and pique, and rattling
off the patter with aplomb. Anatoli Sivko is, likewise, a mean and miserly
Basilio, but if his bass is quite light and self-contained this only serves
to make the dramatic excesses of ‘La Calunnia’ more telling: as the pungent
smoke wafts from the music-master’s cassock, Basilio seems delightfully
oblivious to this snide comment on his ridiculous huffing, puffing and
rumour-mongering.

Laura Verrecchia’s Rosina is less extrovert than de Niese’s unrestrained,
over-excited diva, but this Rosina certainly knows her own mind and when
things go awry she can take proceedings into her own hands. Verrecchia has
a strikingly dark and densely layered mezzo, all amber and honey. I feared
at first that it would prove too heavy a voice to flit with agility through
Rossini’s sparkling coloratura, but my doubts were unwarranted, for what
she lacked in glitter at the top Verrecchia more than compensated for with
style and accuracy. 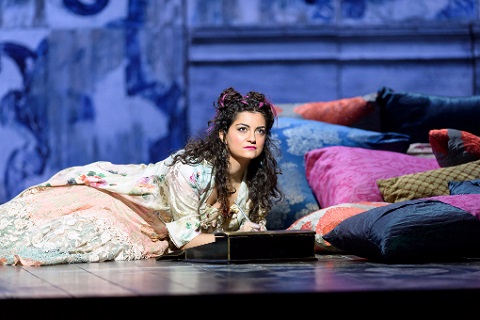 The Glyndebourne Tour Orchestra despatched the tricky overture with
impressive ease, despite the racy tempos established by conductor Ben
Gernon. The rather dry acoustic of the theatre aided the clarity of
Rossini’s bravura motifs and there was some tremendously precise woodwind
and horn playing, which did not lack grace and panache. 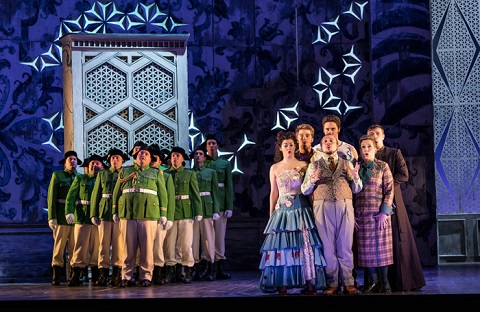 Despite this, however, the act finales never quite caught fire. Necessarily
simplified stage business might have been to blame; perhaps individuals
needed more precise directional guidance. Whatever, the chaotic confusion
which should sweep through Bartolo’s house at the end of Act 1 failed to
materialise, despite the strong choral singing of the chorus of policemen.
Similarly, the surtitles often lagged behind the action. But, this did not
seem to hinder the comprehension of the Canterbury audience, nor diminish
their enjoyment; the cast and orchestra were met with effusive, warm
applause at the curtain call and no doubt this will be replicated as the