It may be impossible to answer the question, ‘What do we mean by
‘Shakespeare’s Hamlet’? But, rather than fretting, like Hamlet,
over whether one should act upon one’s convictions, Dean and Jocelyn have
been liberated by this very ‘inauthenticity’ and have fashioned their own Hamlet – which Dean has described as ‘focusing on a dysfunctional
family with most of the geopolitics taken out’ (so we have no Fortinbras,
Osric, Reynaldo and other courtiers). Having missed the summer performances
at Glyndebourne, I was excited to have the opportunity to see and hear the
results at the Marlowe Theatre in Canterbury.

The challenge of touring with a cast, orchestra and technical crew of
almost 200 personnel has necessitated some revisions: the programme notes
that, ‘Both the production and the score have been substantially reworked
to allow for the demands of different venues’, resulting in ‘a brand-new
version of [director Neil Armfield’s] production’. Yet, even if the
original opening scene, in which Hamlet was seen kneeling at his father’s
grave, has been replaced (revival director, Lloyd Wood) by a celebratory
feast in the grand white dining room of set designer Ralph Myer’s elegant
manor house, Dean’s and Jocelyn’s approach to the text and to the
characterisation of the eponymous Dane are immediately apparent.

Isolated by Jon Clark’s spectral lighting (revived by David Manion), Hamlet
is foregrounded against the dinner guests in modern evening dress who are
seated, frozen in shadow, behind. He mutters and murmurs, fragmentations of
Shakespeare’s text flitting through his mind like a primer of famous
quotations from the text’s familiar soliloquies – ‘The rest is …’, ‘To be
or not to be’; but, one’s expectation that the latter will conclude, ‘that
is the question’, is denied by the creators’ delvings into the ‘Bad’
Quarto, and we are met with, ‘Aye, there’s the point’. And, that’s about it
as far as the play’s soliloquies go, although these few opening lines do
reappear intermittently through the opera. Consequently, we are not privy
to Hamlet’s internal vacillations as he wavers between self-loathing
despair, suicidal distress, vengeful determination and academic
disputation.

Some may feel that Hamlet’s soliloquies ‘define’ Hamlet; that the
protagonist’s dilemma – whether to act, to ‘take up arms against a sea of
troubles’, or to be passive, a stoic like Horatio – is the driving force of
the play. Hamlet’s wavering between submissive forbearance and nobility of
action creates inner conflict and also tension for the audience. Certainly, Hamlet is ‘about’ love, murder, betrayal – the perennial stuff of
opera – but it is also about ‘ideas’, and Dean and Jocelyn pay little
attention to the play’s philosophical abstractions. Perhaps that’s a wise
decision, and to the benefit of the dramatic tautness of the opera, but it
does deprive this Hamlet of any character ‘development’: he is raving and
morose at the start, and that’s the way he stays. This operatic Hamlet is less, in the words of director Armfield, ‘the story of
someone who is trying to find the truth’, and more a study in melancholy,
its causes, manifestations and effects. 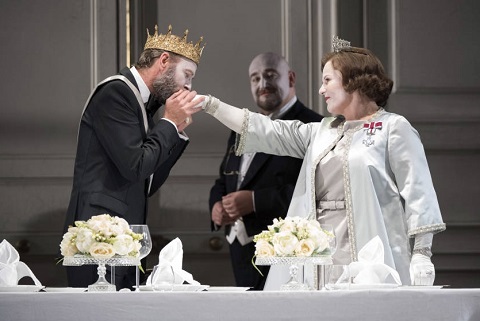 The angry petulance of David Butt Philip’s Hamlet is evident from this
opening scene, as he whips away his chair from the royal couple’s central
table and retreats in sulky pique. There is subsequently much childish
chair-throwing and some immature baiting of Rosencrantz and Guildenstern as
Hamlet tauntingly snatches their pristine pocket-handkerchiefs and
brandishes them with a scornful flourish. However, Butt Philip (who sang the
role of Laertes in the premiere run this summer) strikingly communicates
Hamlet’s introspective alienation and combines this, paradoxically, with a
restless physicality, while the shapeliness of phrasing and the tenor’s
vocal warmth invite our compassion. Moreover, Hamlet’s prevailing agitation
throws into relief the few moments of stillness, making his quiet, almost
tender, rejection of Ophelia – ‘I did love you once’ – all the more
heart-rending, particularly when his plain words are echoed by Ophelia in
her madness. 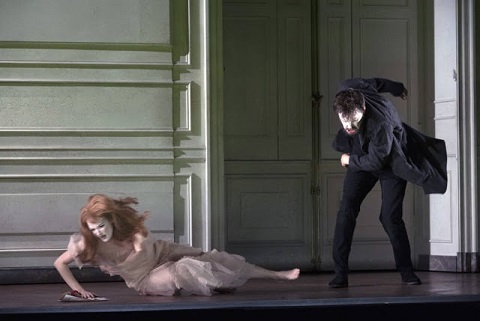 Dean’s first scene also introduces the ‘meta-theatrical’ dimension of the Hamlet – ‘the play’s the thing’, after all – with its incessant
references to ‘acting’ and ‘playing’, and its presentation of the
protagonist as a ‘director’ who manipulates theatrical convention in his
search for ‘truth’. The faces of the cast are caked with white powder, as
if they are participants in a theatrical masquerade. And, Myers’ set, which
slickly swivels to transform the grand dining room first into a cavernous
ghostly chamber, and then an intimate interior, eventually converts into a
tumble-down back-stage area where the Players gather. The latter’s
performance is brief, sensibly restricted to just the dumb-show, and
accompanied by an on-stage accordionist (Miloö Milivojevi?) whose wheezy
bellows add to the meta-theatrical self-awareness.

The role of Ophelia was written with the qualities and capacities of its
first interpreter, Barbara Hannigan, in mind. Polonius’ daughter is no
static, one-dimensional victim but a feisty young woman who not so much
crumbles but explodes into insanity. Though she is repeatedly belittled by
the condescending Polonius – Jeffrey Lloyd Roberts spits out the guttural
consonants of the put-down, ‘green girl’ – and Laertes, she stands her
ground in the face of the latter’s impertinence. dismissing her brother’s
warnings about her loss of honour with an indifferent repeated riposte,
‘Yes, good, my brother’.

There is very little sense of the relationship between Ophelia and Hamlet,
though, and almost no interaction between them, only a scene of bitter
rejection as Hamlet projects his feelings of rage against his mother onto
Ophelia – ‘get thee to a nunnery’. Indeed, subject to incessant derision
and maltreatment by all the male characters, it is no surprise that Ophelia
goes mad. Moreover, Dean and Jocelyn have skilfully re-arranged
Shakespeare’s text so that rather than Polonius reading the love letters
she has received from Hamlet, Ophelia is humiliated by her father and
forced to recite them to Claudius and Gertrude. Elsewhere, too, the
creators exploit opera’s potential for a simultaneity which deepens
expressivity, sharing lines and creating duets which convey the affection
that Hamlet feels towards Gavan Ring’s sympathetic Horatio. They also allow
Gertrude to speak with Claudius about the reasons for her son’s confusion
and ‘turbulent and dangerous lunacy’, and here and
throughout the opera Louise Winters makes much of Gertrude’s lyricism and
her own full tone to arouse sympathy for the duplicitous queen. In
contrast, elsewhere Dean’s general avoidance of vocal lyricism results in a
distancing of the characters whose dilemmas and conflictions were do not
really enter. 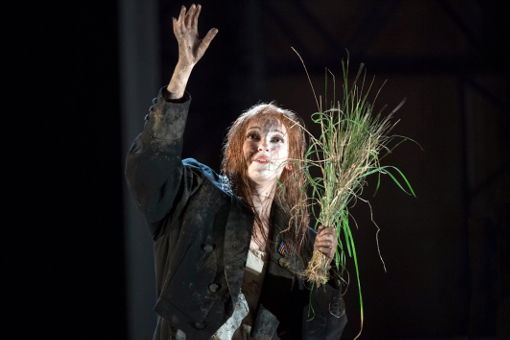 In Shakespeare’s play, it is Ophelia’s song fragments which
exhibit and heighten her derangement and enforce her isolation. However, if
the prevailing medium is song, a composer is challenged to find an
idiom or means of equalling such tragic pathos, and Dean’s response is one
of the highpoints of the opera. Jennifer France’s portrayal of Ophelia’s
disintegration is distressingly visceral, as the soprano’s silky vocal tone
and pin-point coloratura of Act 1 transmutes into a gut-wrenching primitive
scream. Ophelia bursts onto the stage, only a man’s evening tailcoat
covering her underwear; splattered with grime, her filthy hair hanging in
rat’s tails, and clutching fractured green grasses, she seems already to
have attempted to drown herself in the muddy river. Mutter fragments of
recalled derision are replaced by bawdy songs which seem to turn Ophelia’s
breakdown into a ‘performance’, a bold, overtly sexual display. Finally,
sound replaces words: a hum, a wail, then a scream, this vocal
manifestation of tragic alienation rise ever higher, until France flings
out a stratospheric, primeval howl, the defiant energy of which is made
even more arresting by the stillness of the stunned characters who witness
Ophelia’s crisis.

Lloyd-Roberts’ prolix, presumptuous Polonius is without doubt a ‘tedious
fool’ – and has one of the opera’s best one-liners, ‘I will be brief’ – but
his foolishness in no way lessens our discomfort at his abusive treatment
of his daughter. As Claudius, William Dazeley offers an eloquent plea for
divine pardon although, as he places one knee upon a back-stage chair,
after the Players’ unsettling show, it might not be clear to those
unfamiliar with the play that the king is actually at prayer – the reason
that Hamlet, who desires both revenge and justice, desists from killing his
step-father – thus weakening the cruel irony that the hypocritical Claudius
prays for forgiveness for one murder just as he has made arrangements for
Hamlet’s own death. 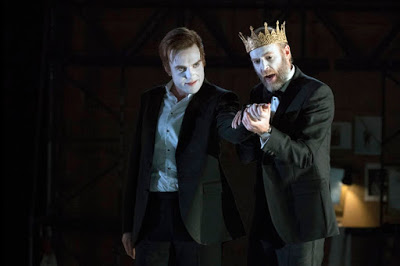 The post-dumb-show scenes feel rather lengthy, too, with Polonius’ death –
a natural point of pause, perhaps – Hamlet’s subsequent conversation with
Gertrude, and the reappearance of the Ghost all taking place before the
interval, making for a long first Act. No doubt, Dean and Jocelyn were
guided by the wish to open the second Act with a dramatic gesture: and they
certainly achieve this with the resounding cries of welcome which the
semi-chorus launch from the Circle balcony to greet the returning Laertes,
played with arrogant self-assurance by Rupert Charlesworth.

As the Ghost of Old Hamlet, Brian Bannatyne-Scott is a disturbing presence,
seated up-stage, streaked with spears of light which pour through the tall
windows stage-right and pierce the darkness, his back turned from his
troubled son. But, while the Scottish bass thunders his command that Hamlet
should revenge his father’s foul and unnatural murder, the Ghost is robbed
of his nobility by the questionable decision to have him remove his jacket
and appear before his son in his under-vest. Surely it is the Ghost’s
military might that Shakespeare emphasises when he has Horatio remark the
spectre’s ‘fair and warlike form/In which the majesty of buried Denmark/ Did sometimes march’ and Hamlet comment on the Ghost’s
apparel when he appears ‘again in complete steel’?

Bannatyne-Scott triples up, as the First Player and as the Gravedigger. In
the latter manifestation, he tosses poor Yorick’s skull as if it were a
tennis ball and the easy nonchalance which ‘custom’ has bred is evoked by
the grubby knotted handkerchief which perches askew on his crown. I
wondered, though, why Dean and Jocelyn have chosen to interpolate much
spoken text in this scene – previously, the odd line or two are spoken or
half-spoken – and in the final scene, when Hamlet challenges Laertes to
fight a duel on Ophelia’s grave?

The inefficacy and bewilderment of Rosencrantz and Guildenstern is expertly
communicated by countertenors Rupert Enticknap and James Hall, whose voices
blend as one as they synchronise their self-conscious hand-wringing and
tentative smiles of appeasement.

Dean’s busy score is vigorously driven forwards by conductor Duncan Ward.
Dean plummets the eerie depths and scales nerve-jangling heights, finding a
kaleidoscope of timbres for every expressive shade that the drama explores.
Although the dictates of touring mean that it is not possible to reproduce
the use of electronic reverberations and satellite instrumental and choral
groups employed in Glyndebourne’s opera house, Dean’s score makes a
striking, often discomforting, impact.

While Dean’s Hamlet may not divulge or explore all of the Danish
prince’s procrastinations, the opera certainly offered this listener much
to think about.