Not only was the performance musically rewarding, the piece was also staged with genuine care and fidelity to the composer’s intentions. General Director and (on this occasion) set designer Larry Hancock seems to have his finger firmly on the pulse of his constituency’s preferences. The happy result is that his period scenery is visually luxurious and vibrantly colorful, all the while it exudes a distinctively Old World appeal. That is not to suggest it is in any sense “dated,” just winsomely “accurate.”
The handsomely paneled, burgundy-curtained drawing room of Act I yields to a wrought ironed revelry of a popular Parisian bar in Act II, before making way for a serene seaside haven in Act III, replete with a profusion of many-hued flowers. Mr. Hancock’s appealing settings were ably complemented by Elizabeth Pointdexter’s sumptuous costumes, which were not only richly detailed, but also particularly characterful in defining the station of the dramatis personae. In tandem with Ms. Pointdexter, Christina Martin was in command of the effective wig and make-up design, which ably completed the “look.”
Kent Dorsey has contributed a particularly subtle, beautifully judged lighting design. The discreet shifts in intensity and color captured the vacillating emotional state of the leading characters. Mr. Kent also used creditable deployment of specials, including understated implementation of follow spot effects. 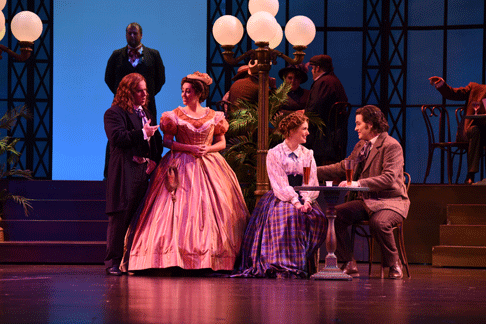 Act II Quartet with (from l) Mason Gates (Prunier), Elena Galv·n (Lisette), Amanda Kingston (Magda) and Jason Slayden (Ruggero)
Director Candace Evans has devised an unfussy, dramatically apt staging with effective traffic patterns and groupings, which underscored meaningful character relationships; and she made commendable use of the entire playing space. Occasionally, Ms. Evans might let an actor wander a bit unmotivated to make use of a different stage area, but I always appreciated her thoughtful quest for variety and her intelligent sense of dramatic focus. Michelle Klaers created the sprightly choreography that enlivened Act II.
But no matter how successful the physical production, no one should come out of Puccini humming the scenery or the staging, so I can gladly report that the musical virtues were nothing less than top tier.
As the enigmatic, evasive “swallow” of the title, Amanda Kingston presented a Magda that embodied all that one could wish in this part. First, she is a statuesque beauty with a glowing, poised stage presence. More important, Ms. Kingston is a Puccinian dream of a singer with a plush, vibrant top voice characterized by creamy, luxuriant tone that is even throughout the range. Her vocal appeal is such that I mentally made a list of all the heroines I would love to hear her lavish with her artistry. Moreover, Amanda has an easy, unforced demeanor that is highly engaging. Her treatment of the famous Doretta’s Song in Act I was ravishing in its aural beauty.
As Ruggero, the physically handsome presence of Jason Slayden represented a one-two punch of effective casting. And he sings, too! Ruggero does not have much to do in Act I, and Mr. Slayden’s rather reserved presence and slightly hard-edged beginning (marked by a rather rapid vibrato) did not allow him at first to show off his interpretive gifts. However, this accomplished tenor quickly made up for lost time.
In Act II, Jason was all boyish charm and he poured on the vocal allure, solidly claiming his status as co-equal co-star with exuberant tone and arching phrases. Act III is largely his showcase, and here he rose to convincing heights with full-throated declarations that rang out in the house with impassioned conviction. The Dynamic Duo of Kingston and Slayden made quite an unassailable case for this neglected opus.
Nor were they alone in their accomplishment. The entertaining tenor Mason Gates was quite an irresistible Prunier, honeyed of voice, bewigged of presence, and assured of theatrical delivery. As his foil, the animated soprano Elena Galv·n was a silver-voiced, spunky actress who accurately hit each and every one of her musical and dramatic marks. Mr. Gates and Ms. Galv·n contributed mightily to the soaring Act II quartet (with Magda and Ruggero), helping to make it a true highlight of the evening.
Trevor Neal intoned a mellifluous Rambaldo, his imposing stature and smooth baritone a real asset to the production. Maya Kherani (Yvette); Teressa Foss (Suzy) and especially Katharine Gunnink (Bianca) contributed memorable turns. Babatunde Akinboboye was the firm-voiced Rabbonier, and Dane Suarez the poised Gobin.
In the pit, Andrew Whitfield inspired an idiomatic reading, marked by lush playing from the banks of strings and accents from the winds and brass that were by turns insightful, playful, and dramatic. Maestro Whitfield implemented a detailed, propulsive path for this lesser known piece that made a substantial case for Puccini’s talents in general and La Rondine in particular. His baton ably elicited the abundant colors in the score and he inspired a sweep and expanse that were inevitably very touching.
In short, Opera San Jose has served up such a totally satisfying, stylistically convincing rendition, it made me think La Rondine might yet join the ranks of vintage Puccini.
James Sohre