“I am an adventurer. I like invention, I like discovery.” Karlheinz
Stockhausen’s view of himself as a composer is, oddly enough, precisely
what we experience as an audience when we hear and see his works. Though
these pieces span the era of the student revolutions and social and
political unrest of 1968, to the final two years of Stockhausen’s life when
he was still tarnished by the “monstrous art” (my quotes) period before his
death, there is much they have in common. They are works about projection –
they both share a sense of ritual and mysticism, albeit from entirely
differing perspectives. They are both works of theatre, though the impact
of one is solitary whilst the impact of the other is entirely enveloping
and spatial. STIMMUNG is entirely about inner voices projecting
outwards; COSMIC PULSES, is about a hurricane of sound that
projects inwards towards nothing and the eventual desolation of silence.
They are both about the nature and extremes of sound – the possibilities
that are thrown up by the human and the computerised.

STIMMUNG
, it has to be said, is a notoriously difficult work to pull off. In part,
the work’s structural simplicities (everything that follows is developed
from a single low B flat) are offset by its vocal complexities (harmonics,
pitch, melodies, identities, phonetics), and the improvisatory scale of the
work that can make it vulnerable to wildly different timings. This one
clocked in at almost exactly 70 minutes, a touch shorter than usual.
Singcircle have this music in their blood, and the performance was driven
by a sense of momentum and intimacy that has been lacking in some
performances I’ve heard elsewhere. Today, there is a considerable age gap
between some of these artists – Gregory Rose has been with the ensemble for
all of its forty years; other members very much less than this. This posed
some challenges, especially vocally, but the unanimity of ensemble was both
transparent and pitch sharp. 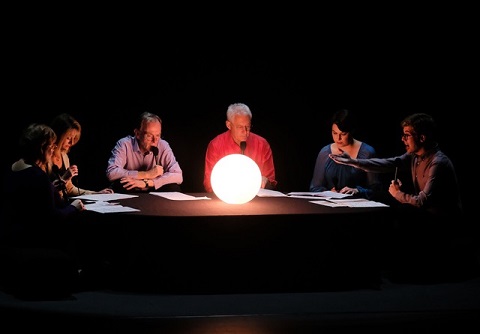 A masterpiece this work might be, but in a bad performance it can be a very
dull masterpiece. I found the six voices – three female, and three male –
to be almost perfectly in tune with what each was doing: singers were able
to find an identity, a requisite in this work, and then pass it on so the
performance had a seamless quality to it. Tempos, rhythms and dynamics were
almost universally shared between the sextet. Perhaps today, Stockhausen’s
actual text for STIMMUNG – with its erotic and intimate love poems
– doesn’t raise quite the same sense of surprise it might have in 1967/8
any more than one would find the poetry or drawings of Verlaine or Cocteau
risky; in this sense, the work sounds a little dated. The staging for STIMMUNG was as it usually is – a bright globe on a table with the
singers placed around it. If in this particular instance this had the
feeling of Leonardo’s Last Supper this was probably not by design.
The only occasional problem during the performance was some microphone
glare through the speakers at the sides of the auditorium but this was
barely loud enough to cause a significant problem. 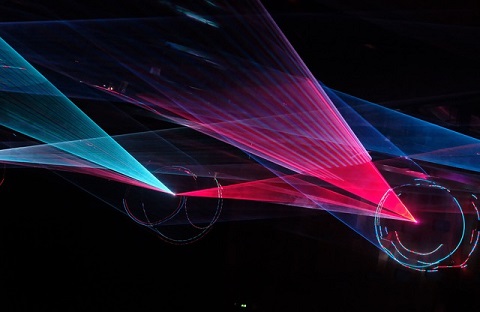 The intimacy of STIMMUNG before the interval had been memorable,
but the pyroclastic explosion of sound that is COSMIC PULSES was
on a different level entirely. Composed in 2006/7 as part of the incomplete
KLANG cycle, based on the 24 hours of the day, COSMIC PULSES, is
the thirteenth hour. Musically, in its most basic sense, it’s twenty-four
melodic loops, each of which has a different number of registers between
one and twenty-four, rotated in twenty-four registers between a range of
seven octaves. The loops are then layered on each other in a sequence from
low to high, and slow to fast – and then they repeat and end one another in
the same order until the work ends in desolation as if the universe has
imploded on itself. They are played through eight speakers giving a sense
of dynamic, surround sound.

The cleverness behind COSMIC PULSES is multi-fold. Stockhausen
could simply have done nothing with the sound other than left it pure – but
he doesn’t. The tempi are given accelerandi and ritardandi – just as the
electro-acoustic melody is pushed upwards and downwards, elastically
stretched to breaking point, sounding at times like electronic glissandi.
The greatness of the work is that huge blocks of electronic sound have an
almost neo-classical form to them. I remain unconvinced I heard everything
as intended, but the spatialisation of the work was more dramatic than I
have encountered on the CD recording of the work, for example. Visually, of
course, looking straight ahead at an empty black stage is rather like
peering into a black hole. The eyes are drawn up to fan-belts of lasers
that spin and loop to the changes of the tempo. Did Robert Henke’s laser
projection add anything to the performance? I think yes because it
underscored the work’s planetary sculpture. This was certainly an
unforgettable experience.