The decision was reached after an exciting final on Sunday 19 November at
the Holywell Music Room, Oxford. The adjudicators were renowned British
singers Bonaventura Bottone and Jean Rigby. Conductor and accompanist from
the Royal Opera House, Paul Wynne Griffiths, was an additional adjudicator
in the preliminary rounds.

This biennial competition was first launched in 2013 to celebrate Bampton
Classical Opera’s 20th birthday, and is aimed at identifying the finest
emerging singers currently studying or working in the UK. 58 young singers
aged between 21 and 32 entered this year’s Competition, and 22 were
selected by the judges to progress through to the first (closed) round.
From this, six singers were chosen to compete at the public final in the
Holywell Music Room. The finalists were Corinne Cowling (soprano), Kamilla
Dunstan (mezzo-soprano), Wagner Moreira (tenor), Emma Stannard
(mezzo-soprano), Samuel Pantcheff (baritone) and Olivia Warburton
(mezzo-soprano).

The judges were impressed with Emma’s overall performance, and her
partnership with Keval Shah. Bonaventura Bottone said:

“We were looking for a well-chosen balanced programme where the singers
engaged with the text creating the character and atmosphere of the pieces
from the outset, sung within their vocal capabilities. Emma fulfilled this
criteria in her prize-winning performance.

The balance of her performance was superbly supported by Keval Shah who
underpinned Emma’s programme with effortless musical poise.”

Emma Stannard recently completed her studies with Royal Academy Opera,
under Yvonne Howard and Joseph Middleton. With RAO she performed the roles
of Ruggiero (Alcina), Hanna (May Night),

(L’incoronazione di Poppea) and Junon (OrphÈeaux enfers). Emma has since performed the role of Minerva in Il ritorno d’UIisse and Pepa in Goyescas for Grange Festival, was
a Britten-Pears Young Artist at the Aldeburgh Festival and toured the Verdi
Requiem with Merry Opera Company. In January 2018, she will return to MOC
as Cherubino in performances of Le nozze di Figaro. She is
supported by Help Musicians UK. 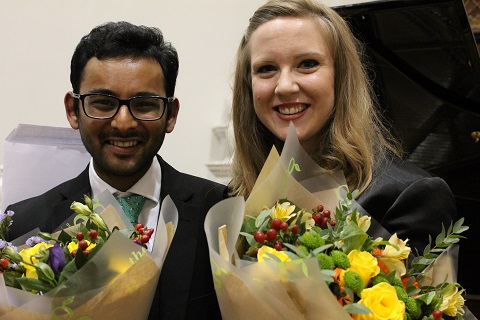 Winner of the 2017 Oxford Lieder Young Artist Platform, Keval Shah performs
extensively as a song accompanist, with recent appearances including
Aldeburgh, Edinburgh Fringe, Oxford Lieder and Leeds Lieder Festivals. He
studied at Trinity Hall, Cambridge and the Royal Academy of Music,
graduating from both institutions with Distinction, and is currently a
Fellow at the Academy. Engagements in 2017/18 include Wolf’s complete Mˆrike Lieder and Italienisches Liederbuch, and debut
recitals at the Wigmore Hall, St John’s Smith Square and at the
Heidelberger Fr¸hling. Keval is an Oxford Lieder Young Artist and a Britten
Pears Young Artist, and is grateful for the support of the Winifred
Christie Trust, Countess of Munster Musical Trust and the Viola Tunnard
Memorial Trust.

Looking ahead to 2018, Bampton Classical Opera’s 25th anniversary season
opens with a concert on 7th March to celebrate the legendary
soprano Nancy Storace.
Anglo-Italian soprano Nancy Storace (1765-1817) was renowned for her vocal
prowess and remarkable stage presence, enjoying a glittering career across
Europe. Recruited for the Emperor Joseph II’s new Italian opera company in
Vienna, she came to the notice of the leading composers of the day, above
all Mozart who created the role of Susanna in Le nozze di Figaro
specifically for her. Bampton Classical Opera marks the bicentenary of her
death with an appealing concert of music associated with her, including
arias sung by rising star Jacquelyn Stucker, currently a Jette Parker Young
Artist at the Royal Opera.

BCO’s summer production will be Nicolo Isouard’s Cinderella, the
hugely popular predecessor to Rossini’s version, thereby continuing
Bampton’s remarkable exploration of rarities from the classical period.
Isouard died in Paris in 1818 and so this new production also marks his
bicentenary. Born in Malta in 1773, Isouard was renowned across Europe,
composing around 42 operas, many of which were published and widely
performed. As a young man and following the success of his first operas
which were performed in Italy, Isouard became director of the Teatru Manoel
in Valletta, Malta. Moving to Paris in 1799, Cendrillon of 1810
was one of his many successes at the OpÈra-Comique and was performed across
Europe to huge acclaim, and especially in Germany and Austria, until
knocked off its perch by Rossini’s La Cenerentola in 1817.

Cendrillon
is designated as an OpÈra FÈerie, and is in three acts, to a libretto by
Charles Guillaume Etienne, after the fairy-tale by Charles Perrault. The
Bampton production will be sung in a new English translation by Gilly
French and Jeremy Gray. With his gifts for unaffected melody, a sharp sense
of parody in the music for the step-sisters, several appealing ensembles
and always beguiling orchestration, Isouard’s Cinderella is ripe
for rediscovery. Performances will be conducted by Harry Sever and directed
by Jeremy Gray: