There were no pre-show warnings, as in

, that the production contains scenes depicting ‘sexual acts’ and
‘violence’ – it’s hard to think of a nineteenth-century dramma tragico that doesn’t feature sex and violence – but while
the dead bodies on the billiard table are still piled high, there seems
rather less gore than I had remembered: neither blood vessels nor bathtub
overflowed with such gruesome abandon. Lucia and Alisa still show an
unhealthy enthusiasm when stabbing and asphyxiating the unsuspecting Arturo
who, blindfolded by his apparently compliant new wife, is probably
anticipating pillow games of a rather different nature. But, the
leg-twitching of Arturo’s death throes was less exorbitantly prolonged, his
fairly quick demise avoiding the uncomfortable guffaws prompted by last
year’s extravagant expiration.

Vicki Mortimer’s detailed set remains divisive in several senses. Even the
programme book synopsis is set out in two separate columns to delineate
what is going on stage left and right, as the action unfolds in the public
and private domains of the partitioned set, but there is still too much to
take in in one visual sweep. There is always a sense that one is missing
something, the scribbling of a letter, the fleeting suggestion of a ghostly
presence, at the far edges of the production. And, I still found the mimed
‘business’, while visually embodying implied off-stage events, to be
distracting. Lucia and Alisa, for example, are perennially preoccupied with
changing Lucia’s clothing, whipping off frocks, tugging on trousers,
adjusting corsets or hoops, pulling on dressing-gowns. It’s quite a
‘relief’ when Lucia is ‘stripped’ down to her bloodied night-dress, and the
costume carousel is over.

The shallow set, its recesses quite dimly lit by Jon Clark, has a tendency
to become crowded in the ensembles. The ROH Chorus are once again in
tremendous voice, but they can do little more than position themselves like
statues – around the graves in the crypt, behind the banqueting table and
billiard table. Their Act 3 cry of horror, ‘We are frozen with terror’,
prompted the thought that they hadn’t actually moved during the entire
opera. 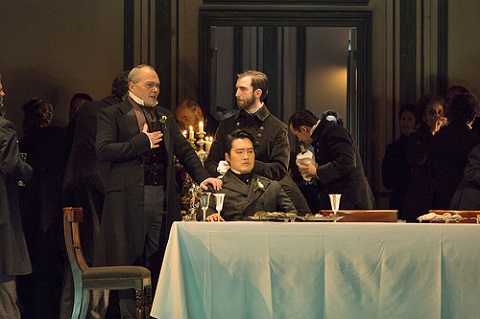 Despite these prevailing misgivings, though, this really was a tremendous
performance, the principals offering stunning individual performances and
responding to each other with absolute conviction and coherence. As the
obsessive, unforgiving and over-bearing Enrico Ashton, Christopher Maltman
thundered with dark-toned authority; it was no wonder that Lucia cowered
and collapsed in the face of such ruthless intimidation. Occasionally
Enrico’s pompous indignation veered dangerously close to ‘cartoon baddie’
territory, but Maltman’s clarion vocal clout was balanced with subtlety and
nuance. The clarity of his characterisation also brought the political
context neatly to the fore, without the historic grievances between the two
Scottish clans ever intruding fussily upon the unfolding personal
tragedies; we understood, and perhaps forgave at least in part, the driving
rationale behind his domination of his sister and his determination to
control her fate. The Wolf Crag confrontation between Enrico and Edgardo
bristled and burned with the unresolved conflicts of the past.

Andrew Tortise’s Normanno matched Enrico for vengeful resolve, but Michele
Pertusi’s Raimondo was a calmer complement. Pertusi’s Act 2 plea for Lucia
to sacrifice herself for the good of her family and for heavenly reward,
‘Al ben de’ tuoi qual vittima’, was beautifully crafted, each phrase
carefully measured. Raimondo’s evident sympathy increased our own. 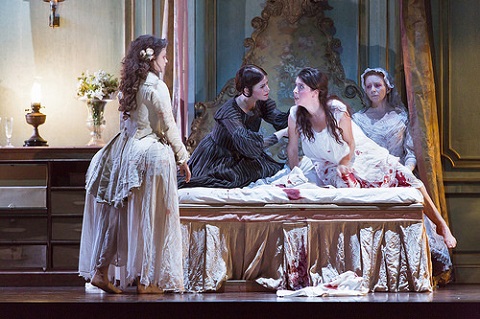 The phantoms of Ravenswoods and Ashtons past seemed to me to be even more
omnipresent. The murdered girl inserted herself between the embracing Lucia
and Edgardo, in the latter’s family crypt – though this was an improvement
on the couple’s cliched carnality in 2016 – and appeared at precisely the
same time as Edgardo at the wedding banquet, and the ubiquitous apparitions
enhance our impression of Lucia’s derangement and mental distress.

Mitchell has declared her intent to make a ‘real woman’ of Lucia, one whose
credible physical suffering prompts rebellious reaction and ultimately
mental breakdown. There’s still ambiguity, though, whether the pallor and
faintness that Lucia and the other characters draw attention to in Act 1
results from her morning sickness or from her brother’s threats and
deceptions. Mitchell and Mortimer update the action to Donizetti’s 1830s,
the decade which (she noted in 2016) was ‘a very important period for
feminism with the BrontÎs and all those amazing women like Mary Anning who
were early feminists, fossil-hunters and scientists’ – a nascent feminism
which is further asserted by Mary Evans’ programme article for this
revival. But, Cuban-American soprano Lisette Oropesa was appropriately
tentative initially, capturing Lucia’s trepidation as she reflects on the
ghostly glimmers which haunt her and the water of the fountain which turns
blood-red.

Oropesa’s glinting soprano is fairly light but it grew warmly and
expansively as Lucia’s distress deepened, and the crystalline precision and
limpidness which I had admired at

this summer were again in notable evidence. As the sometimes cruel Norina
in Mariame ClÈment’s Don Pasquale, Oropesa was a woman firmly in
control of her own destiny but despite Mitchell’s avowal to make Lucia more
feisty than faint-hearted, however much she wishes to challenge Enrico’s
callousness Lucia’s destiny is undeniably ordained. She can ‘escape’ only
into madness. In the ‘mad scene’, Oropesa was utterly broken but, to the
soprano’s and Mitchell’s credit, this Lucia’s melodic meltdown was not an
abstraction of disembodied madness but the terrible disintegrated of a real
woman for whom we, and the stage witnesses, feel terrible sadness.
Oropesa’s vocal purity returned Lucia to childlike vulnerability and
victimhood. 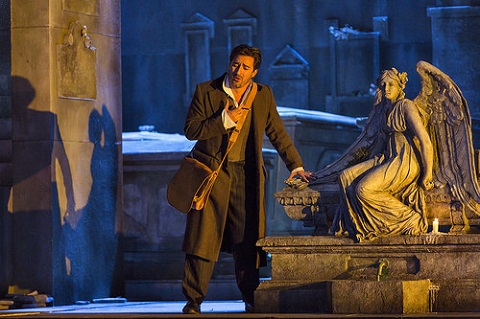 Returning to the role of Edgardo, Charles Castronovo impressed even more
than in 2016, his tenor glowing first with ardency and a flawless legato,
and then, in the banquet scene, with reproachful anger. His disruption of
the wedding banquet was theatrically thrilling, and when he struck Lucia,
for her imagined betrayal, it was hard not to flinch.

As Arturo, Konu Kim pushed his tenor a bit hard at the start, but he ironed
out the occasional rough edge and gained more urbane control of the
phrasing and line. Rachael Lloyd, returning as Alisa, displayed vocal
evenness that was an appealing match for Oropesa’s clean sound.

Conductor Michele Mariotti carefully delineated the score’s detail. The
woodwind, seated to the far left of the pit, made an eloquent, expressive
contribution, and the melodism of the cellos’ and basses’ frequent
pizzicato passages was emphasised. The lack of hyperbolic heft in no way
diminished the emotional power of the orchestral delineation and
commentary.

Castronovo’s ‘Tu che a Dio spiegasti l’ali’ stole the show last time round,
but in this revival there was more genuine and tensely affecting feeling
between Edgardo and Lucia, and while the romantic throbbing of the final
scene was just as electric (and now undisturbed by histrionic
wrist-slashing from Lucia), it seemed fitting that Edgardo should rise and
rush to her side in her dying moments, so that their last breaths could be
taken together.