Not that Jules Massenet’s 1884 opera based on the AbbÈ Prevost’s 1731 novel has much to do with San Francisco’s tech drenched world. Except that the production by French director Vincent Boussard — with a perfect cast top to bottom (a rare feat for SFO) and deep musical sympathy for Massenet’s trivial but magnificently crafted score by French conductor Patrick Fournillier — reverberated with trivial, exquisitely crafted emotions. It was a pure, universal art without much to do with anything or anywhere.
American soprano Ellie Dehn (Fiordiligi and Donna Elvira in recent SFO Mozart revivals) brought purity of voice, impeccable technique and refined musicianship and made Massenet’s shallow trollop into an exquisite porcelain miniature. In aria after aria (there are lots and lots of them) Ms. Dehn’s Manon’s artistic integrity belied her selfishly frivolous ambitions. Her crystalline portrayal reflected off of the mirrored floor, her shadow caught on a curved wall that was at once her world and the world’s display case. 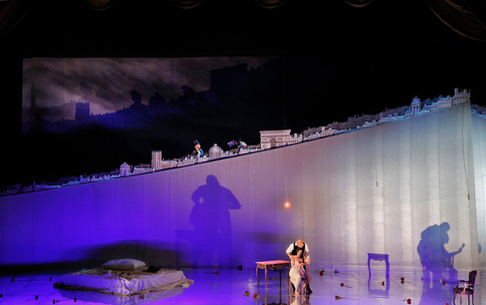 La petite table of Act II
American tenor Michael Fabiano (Rodolfo and Don Carlo in recent SFO productions, Jose at the Aix Festival) added stature to his exploding career as des Grieux, the amplitude of his voice and his studied acting made Massenet’s impulsive young lover — who without a second thought hides his chagrin in abbott’s habit overseen by crucified Jesus hanging in an upper vast black void — into a formidable operatic creation, never mind that it only took a few confused seconds for him to pull Manon onto the floor of the church and roll on top of her. All this after his exquisite “Ah†! Fuyez, douce image” that was met with our thunderous applause.
For those many of you who didn’t stick around for the end, Manon expired down stage center in des Grieux’ arms before rolling off the mirrored floor into the total black void that had enveloped the entire stage, all traces of the world erased. There were only these two meaningless creatures in the throes of high art. It was, in fact, sublime. 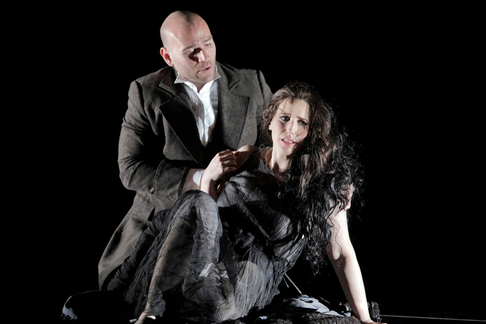 Michael Fabiano as des Grieux and Ellie Dehn as Manon
Director Boussard’s set designer Vincent Lemaire provided the curved sloping wall and the mirrored floor that continued up the downstage left wall. As well it will have been Mr. Lemaire who provided the nothingness of the black void. Mr. Boussard created his own costumes, fantasy abstractions of the Belle …poque, the women’s costumes adding intense color to the colorless monotones of the stage. Gilded shopping bags and gift boxes punctuated the space, not to overlook the bouquets of balloons, one of which transported Manon from the top of the wall to the floor of the stage!
This complex stage may have been heaven itself for the art of lighting designer Gary Marder, or maybe it was hell. Whichever, the lighting was a tour de force. From time to time the floor reflected onto the wall, the wall was bathed in color reflected on the floor, the minds and bodies of the actors were amplified by their shadows cast upon the wall, all the stage was black except for the precise illumination of the singers, and seemingly infinite variations of all the above.
The French of the all American cast had been coached to kingdom-come, making the spoken dialogues fun to follow as best we could, helped by the supertitles. Excellent companions to the Manon of Ms. Dehn and the des Grieux of Mr. Fabiano were des Grieux’ father (an exact echo of La traviata’s Germont), richly intoned by age appropriate bass James Creswell, Manon’s sleazy cousin Lescaut cockily delivered by baritone David Pershall and Lescaut’s rich friend de Bretigny intoned by elegant and worldly Timothy Mix. Providing additional, substantial vocal pleasure was the trio of actresses smoothly sung by RenÈe Rapier, Laura Krumm and Monica Dewey (strangely not a current Adler Fellow on the roster).
A slowly descending grand chandelier substituted the fourth act ballet, though when Manon’s original suitor Guillot (Robert Brubaker) entered he was accompanied by a sous-sus-ing ballerina in tutu (Rachel Speidel Little) on a leash.
This masterful Boussard production originated in Vilnius in 2015. From San Francisco it travels to Tel Aviv. Not to be missed.
Michael Milenski