One can envy the practice of many German orchestras, which play for both opera house and symphony hall, but envy does not necessarily take us very far. (Actually, as Alberich will show us, it does, but perhaps not in the best direction.) In a closer-to-ideal world, admitted Vladimir Jurowski in the programme, there would have been a theatrical production, but the Ring ‘would be the end of Glyndebourne as a venue – it would simply fall apart if we tried to squeeze the orchestra into the pit!’ Why an achievement to perform it, though? Because Wagner’s dramas offer a standing rebuke to neoliberalism. It is not that there is any lack of ‘demand’; look how performances, especially in Wagner-starved Britain, will often sell out within a few minutes. But however great the demand, they will not ‘pay for themselves’. They are a communal undertaking, explicitly intended and functioning as heirs, political, social, religious, and dramatic – the distinctions make no sense – to the Attic tragedy of Aeschylus and Sophocles. (For more on that, please click here .) 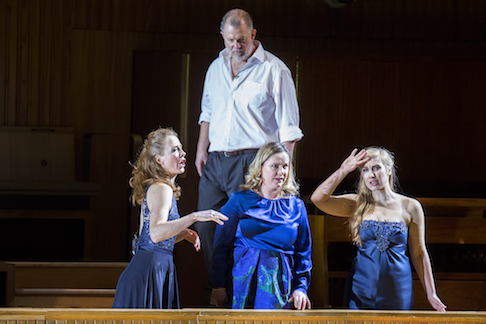 Moreover, for the London Philharmonic Orchestra to give such an outstanding orchestral performance, in what must be the first time many of its players will have performed the score, is again cause for thanks and rejoicing. The LPO strings could hardly have proved more protean, the variegation of their tone a challenge to many an opera orchestra, that variegation surely born in part of Jurowski’s strenuous demands. Detail was present and vivid to what sometimes seemed a well-nigh incredible decree. For instance, the brass spluttering as Alberich floundered in the Rhine, for instance, looked forward suggestively to Strauss’s critics in Ein Heldenleben . If the anvils did not sound as they might in one’s head, when do they ever? That was no fault of the excellent nine players on three sides of the stage. The Prelude sounded – and, given the pipes behind the stage – unusually organ-like: not just the timbres, but also the insistence on the E-flat pedal, quite beyond any I can recall previously having heard. Such was the revealing side of Jurowski’s tight leash and rhythmic (harmonic rhythm included) exactitude, Bruckner coming strongly to mind.

And yet, as so often, Jurowski himself proved too unyielding, almost Toscanini-like, if on a lower voltage. His again was quite an achievement, given that this was the first time he had conducted the score. There is no reason to think that subsequent performances will not reap rewards. By the same token, however, it would be idle to think that this compared to a Daniel Barenboim or a Bernard Haitink, although it certainly knocked spots off the incoherent incompetence Wagner generally suffers under Haitink’s successor at Covent Garden . To Londoners who hear little or nothing else, this would rightly be a cause for rejoicing. Moreover, the sometimes almost caricatured formalism of Jurowski’s approach – I wondered at times whether he had been reading Alfred Lorenz! – was not without its rewards. Was structure, however, too clarified, even simplified? For every revealing instance of opposition between different varieties of thematic material – Fricka’s disruptive, recitative-like ‘Wotan, Gemahl’, for instance, amidst Wotan’s orchestral dreaming of Valhalla – there were at least two passages that were distinctly subdued, almost as if concerned that the orchestra would threaten audibility of the singers. (It never did, by the way.) It was wonderful to hear so much harp detail as the gods crossed the rainbow bridge, and there is certainly good, Feuerbachian dramatic reason to emphasis the unreal beauty of the fortress and the path thereto. It need not, though, and surely should not come at the expense of its sacerdotal power. Novelistic, almost domesticated narrative sometimes threatened, in a dialectical turn, the integrity of musico-dramatic form. Yes, this is epic, yet it is anything but undisciplined. Das Rheingold, however, is a very difficult work to bring off: in some ways more so than the subsequent Ring dramas. Even Barenboim has sometimes erred a little too much towards Neue Sachlichkeit here. That there was a good deal to engage with critically, however, the foregoing merely illustrative, suggests that Jurowski’s Wagner is and will continue to be something to take seriously. 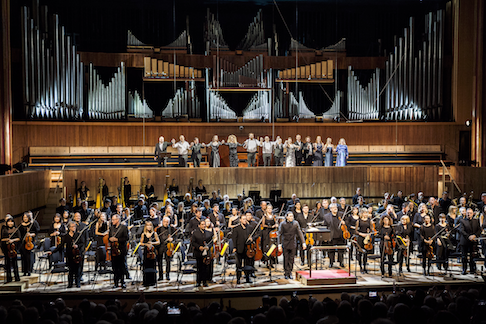 Vocally, as will almost always be the case, the bag was mixed. I could not resist the sense that, to a certain extent, at least Matthias Goerne’s Wotan was a little too much reliant on stock emotionally stunted sociopathy. Only towards the end, after the arrival of Anna Larsson’s typically excellent Erda, did he seem more truly ruminative. That is a crucial moment, of course, in his road towards Schopenhauerian conversion, but Wotan is never merely a figure of force. ‘Nicht durch Gewalt!’ is, after all, his injunction to Donner. Robert Hayward’s Alberich went awry a few too many times; at his best, however, he proved darkly impressive. The giant pair of Matthew Rose and Brindley Sherratt also duly impressed as Fasolt and Fafner, the lovelorn brother genuinely moving, the sheer malevolence of Fafner at and after his death chilling indeed. Vsevolod Grivnov and Adrian Thompson offered detailed, dramatically alert ‘character tenor’ portrayals of Loge and Mime respectively, Allan Clayton’s light, bright-toned Froh a proper contrast. Michelle DeYoung’s Fricka, often imperious, was sometimes a little on the wobbly side, but there was little harm done in that respect, nor in the not dissimilar case of Lyubov Petrova’s cleanly sung Freia. Above all, there was a fine, almost Mozartian sense of conversation in passages of much dramatic to-and-fro. If only there had been a little more conventional drama. There nevertheless remained much to admire – and far from only because it happened at all.