One of those ‘lost’ songs, Einsamer Gang (Lonely Walk), has
recently been discovered and will be given its UK premiere performances by
Rozanna Madylus and Counterpoise at the Wagner 1900 conference in Oxford
(April) and at the Newbury Spring Festival (May).

Einsamer Gang
is one of three songs composed by Alma Mahler in 1899-1900 and was written
before her lessons with Alexander Zemlinsky and before her introduction to
Gustav Mahler. The other two, Leise weht ein erstes Bl¸hn and Kennst du meine N‰chte?, were published by the American scholar
Susan Filler in 2000, but Einsamer Gang was tracked down by
Deborah Calland and Barry Millington in the Kislak Center for Special
Collections, Rare Books and Manuscripts, at the University of Pennsylvania.
They have made a performing edition of the song for these concerts and plan
to publish it in The Wagner Journal later in the year 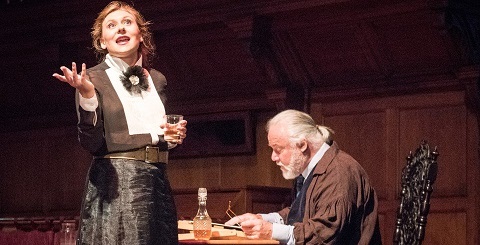 Einsamer Gang
, a touchingly evocative and personal setting of a poem by Leo Greiner,
expressive of Alma’s almost suicidal loneliness and depression at this
period, will form part of the sequence The Art of Love: Alma Mahler’s Life and Music, which features also
music by Gustav Mahler, Zemlinsky and Wagner. In the second part of these
concerts, Counterpoise will perform Kokoschka’s Doll with Sir John
Tomlinson, for whom it was written last year by John Casken. The painter
Oskar Kokoschka had a brief but tempestuous love-affair with Alma Mahler,
following which he commissioned a life-size doll of her which he took to
parties and other public events. The text of this new work describes the
events as seen through the eyes of Kokoschka as an older man, evoking the
passions unleashed by the affair, against the background of the physical
and psychological traumas suffered by Kokoschka in the First World War. The
score weaves the texts into a musical fabric that references fin-de-siËcle
Vienna (including the music of Wagner and Alma Mahler) while being of our
own time.

Kokoschka’s Doll and The Art of Love
, incorporating Einsamer Gang, will be performed at: